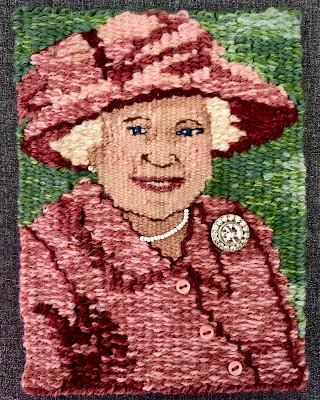 Sometimes life throws a lot of Big Things at you, and it seems like doing anything at all is beyond you. That is when you need to do little things. I have been doing little things for awhile now, and they are keeping me sane. (I do not use that phrase lightly.)
The tapestry of the Queen of England, above, is a very little thing! It is postcard size, about 5x7". It was woven for the ATA postcard exchange, and sent to England last summer. I share a birthday with the queen, and was, in fact, born in the year (on her April birthday) that she became queen. So I loved making a tapestry of her in our Platinum Jubilee year! 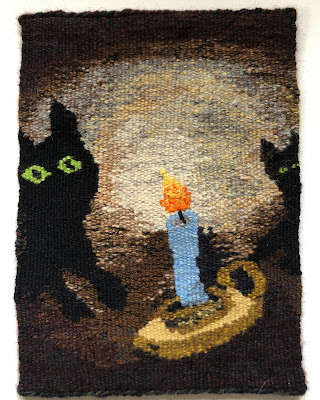 This tapestry is a tiny bit larger, about 7x9". It is called 'Things That Go Bump in the Night' and was just sent off to the Tiny But Mighty exhibit, hosted by ATA in Knoxville, TN this summer. This was a bit of fun to both design and weave! 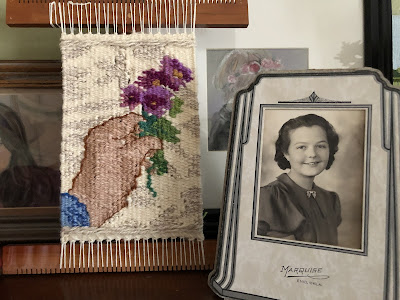 The little tapestry above is still on the loom. It is about 5x7" and was woven for Mother's Day, as I remembered my Mom, who is no longer here to give flowers to. 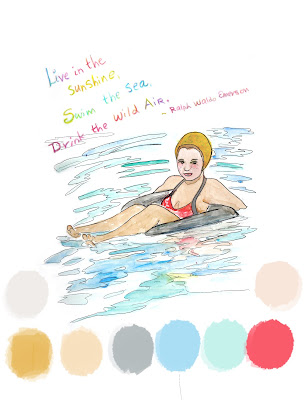 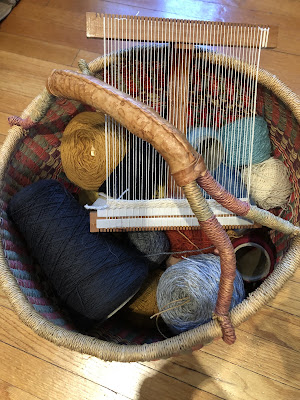 The sketch is from my sketchbook. I have been feeling uninspired and out of ideas, even small ones, for awhile now. But I did the little sketch from a vintage photo, then decided to warp up my tiny loom and weave it. It will be a little thing, too, at about 7x8".
When Life gets a bit too big.... I reach for my little looms. What else would a weaver do?
Posted by K Spoering at 11:25 AM 2 comments:

Some Study, Some Experimentation...Some Fun!

Eight or so years ago, I painted regularly, as I was in a gallery and needed to keep my space filled. I sold fairly well, which was also motivating. After leaving the gallery (which was intended to be a short leave) I quit painting. Recently I decided to re-educate myself a bit, by going through my large library of art books, and gleaning what I can from them, and then I will donate the books to the local Art Center.
I began with a book about painting like the Impressionists (I have an early version of this book.) The first example/challenge was to paint a landscape like Monet. I chose to paint from a photo I had taken of one of my 'grand dogs' on a walk in New England. I know painting from a photo is NOT like Monet would have done, but I decided to adapt to my own circumstances. This is oil on canvas, and it was a challenge! I don't know that it is Monet-like, but I did use his palette and attempted to use brushstrokes as he did in his landscapes .
The second challenge was to paint a snow scene in the style of one of the lesser known Impressionists, but one I have always liked very much, Sisley. This was painted (again from one of my photos) of our cabin in the winter. It was in my landscape sketchbook, which has heavy watercolor paper. I painted it in gouache, painted as if with oils. Again, I replicated Sisley's palette as closely as I could.
The third challenge was to paint a boat scene in the style of Renoir, who didn't consider himself an Impressionist, but who occasionally painted in an impressionistic style. I again did this in my sketchbook with acrylics, using Renoir's palette, and doing it in several sessions, as he would have done. I used the palette Renoir used in a similar scene and used a photo I had taken in New England for my source. The photo had very different colors, but I decided to just go with Renoir.
The most recent experiment/challenge was to paint a still life in the style of Cezanne. This is acrylic on canvas, again using Cezanne's palette as closely as I could, and painting it in one session.
Doing these paintings/sketches in different styles, with different painting 'attitudes' has been challenging, rewarding, and flat out fun! I have loved having a loaded paint brush in my hand again. I don't necessarily view any of these as 'successful,' either as style-copies of these masters, or as paintings in and of themselves. But what I have learned from doing them is invaluable: it is that I love learning and trying new challenging things, and that I love painting, especially with oils. So I intend to continue this study, and perhaps find that I will discover my own way of making brush strokes, and that some of what I create may even find it's way into the medium I love most, handwoven tapestry. After all, that is why I began painting in the first place, to design for my tapestries.
Posted by K Spoering at 11:14 AM No comments:

Just a year ago, in February of 2021, my husband and I drove to the Arches National Monument, a few hours away from us, in Utah. We have been to the Arches a number of times, over the years, but had never taken the hike back to the Tapestry Arch, because it was either too hot or too populated (usually both) when we were there before. This time it was not hot, and, due to the pandemic, we were the only ones on the trail. 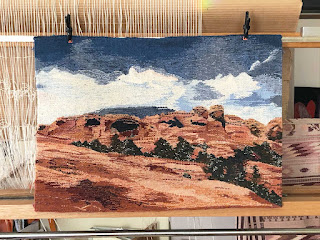 The Tapestry Arch tapestry is woven, and off the loom (though it is clamped to the loom so I can see it.) Some of the finishing work is done, but the final blocking, lining, and making the hanging device are yet to be done, plus getting some good photos! As you may have noticed, the photos here were taken at different times of day in my studio; some on sunny days and some on cloudy days. So the color is not consistent or accurate in the images.
I have documented this tapestry as it progressed on Instagram, but decided to put it here, as a completed work. I have begun a small tapestry already, as I find being at the loom is a necessary part of how I cope with the stresses life is throwing my way. I hope you have a creative practice that keeps you hopeful, as well!
Posted by K Spoering at 1:56 PM 3 comments:

Enough is quite often enough. 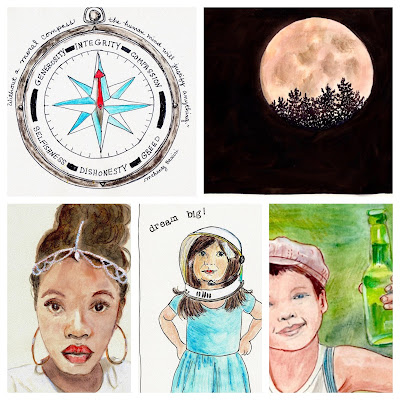 After doing 21 Inktober sketches, three weeks of this year's challenge, I decided I was done with it. The later prompts do not inspire me, and I am wanting to use my limited creative time weaving or sketching and painting with other media. Several of these sketches I believe would have been better if done with something other than ink. The prompts for the sketches above are Compass, Moon, Loop, Helmet, and Open. They all were done with ink and Intense paint or pencils, often with a bit of ballpoint pen ink as well.

It is that time of year again! The time when I pull out ink and pens, as well as the Inktense pencils and pan paints, and create daily sketches based on the official Inktober prompts. We’re just about halfway through the month, and I’ve done all 14 of the sketches, so far.

A few of these sketches are based on photos from the Sktchy app, but some are based on my own photos and memories. I always look forward to Inktober, not only because I enjoy being challenged to use materials and respond to prompts I’d not otherwise use, but I also really enjoy seeing what other sketchers do with the same prompts, and pretty much the same limited materials. I try to not spend a great deal of time on these sketches, but do them over my morning coffee, spending about 1/2 hour on them. Here is the list of prompts for this year. 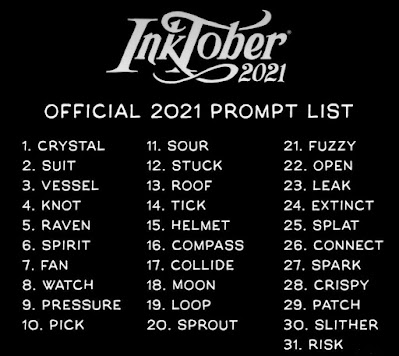 Posted by K Spoering at 1:21 PM No comments: 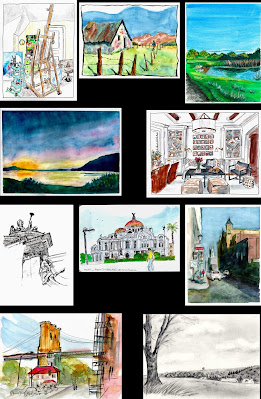 These are the final sketches from July's 30places30days Sktchy challenge. I enjoyed doing them all; trying media and techniques I'd otherwise not challenge myself to try. I especially loved doing the looser sketches, which usually were done in watercolor.  Details about each of these are on my Instagram feed. 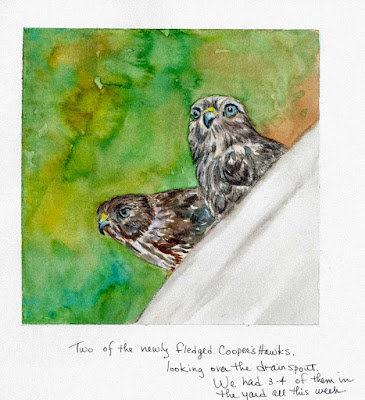 This past couple of weeks, we've had 3-4 fledgling Cooper's Hawks trying our their hunting skills in our old evergreen trees. They have provided much entertainment for us, and for our cats! They seem to be splitting up now, each to their own territory, and one has claimed our yard. In the long run, I'm not sure I'm thrilled about that, as we love our songbirds.

Now, with the 30 day sketch challenge over, I have changed my studio work table over from a sketching post, to a weaving table, once again. It will stay this way at least until the current tapestry is completed, and I'll be sketching on my lap desk in the sitting room. Wherever I am, or whatever I'll be doing, there will surely be at least one cat keeping me company!
Posted by K Spoering at 12:28 PM No comments:

More sketches, and a new Tapestry... 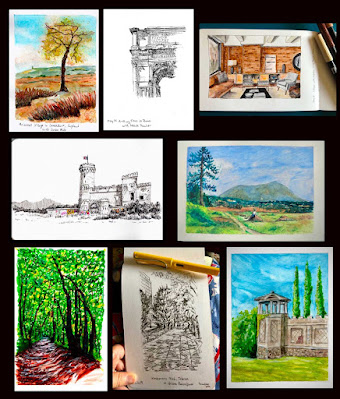 #30places30days is moving on. We're up to Day 22 now. Here are 8 more sketches in (from top left) watercolor in England, ink in Rome, markers in an interior, ink in Spain, watercolor in Colorado, markers in Canada, ink in Iraq, and watercolor in New York City. That's a lot of travel for someone who rarely leaves home! 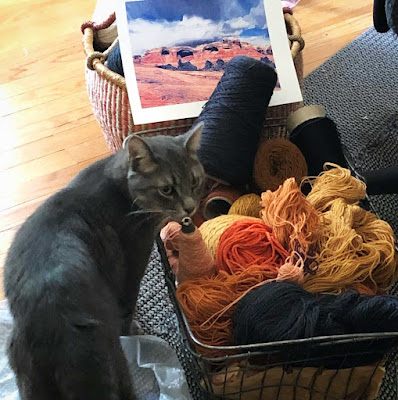 While I'm spending so much time thinking of landscapes, I decided it's time to do one in my own medium; handwoven tapestry. So Ringo and I sorted yarns out, and Poe 'helped' me warp the loom, which means it took me an extra few hours to fix his night time warp work! (Those hanging threads were evidently irresistible, but he did no real damage, thankfully.) 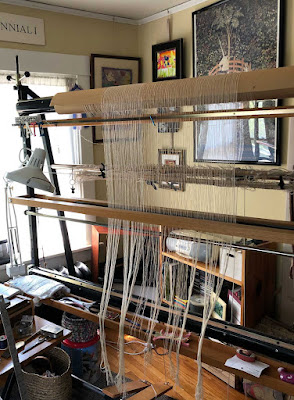 Also this week, I received the handwoven tapestry postcard from England, from my postcard exchange weaver. It is beautiful, and arrived safely, and I can hardly wait to share it with you! The one I made has been sent and tracking says it is now on it's way from London to it's final destination. The reveal of our postcards, and all others who have participated, will be in August, and I can't wait to see them all!
Posted by K Spoering at 10:07 AM No comments:

K Spoering
Contemporary tapestry designer and weaver, oil painter. Unless otherwise attributed, all images are copyrighted and belong to me. Please ask before using or posting them elsewhere. Your comments make me Very Happy!