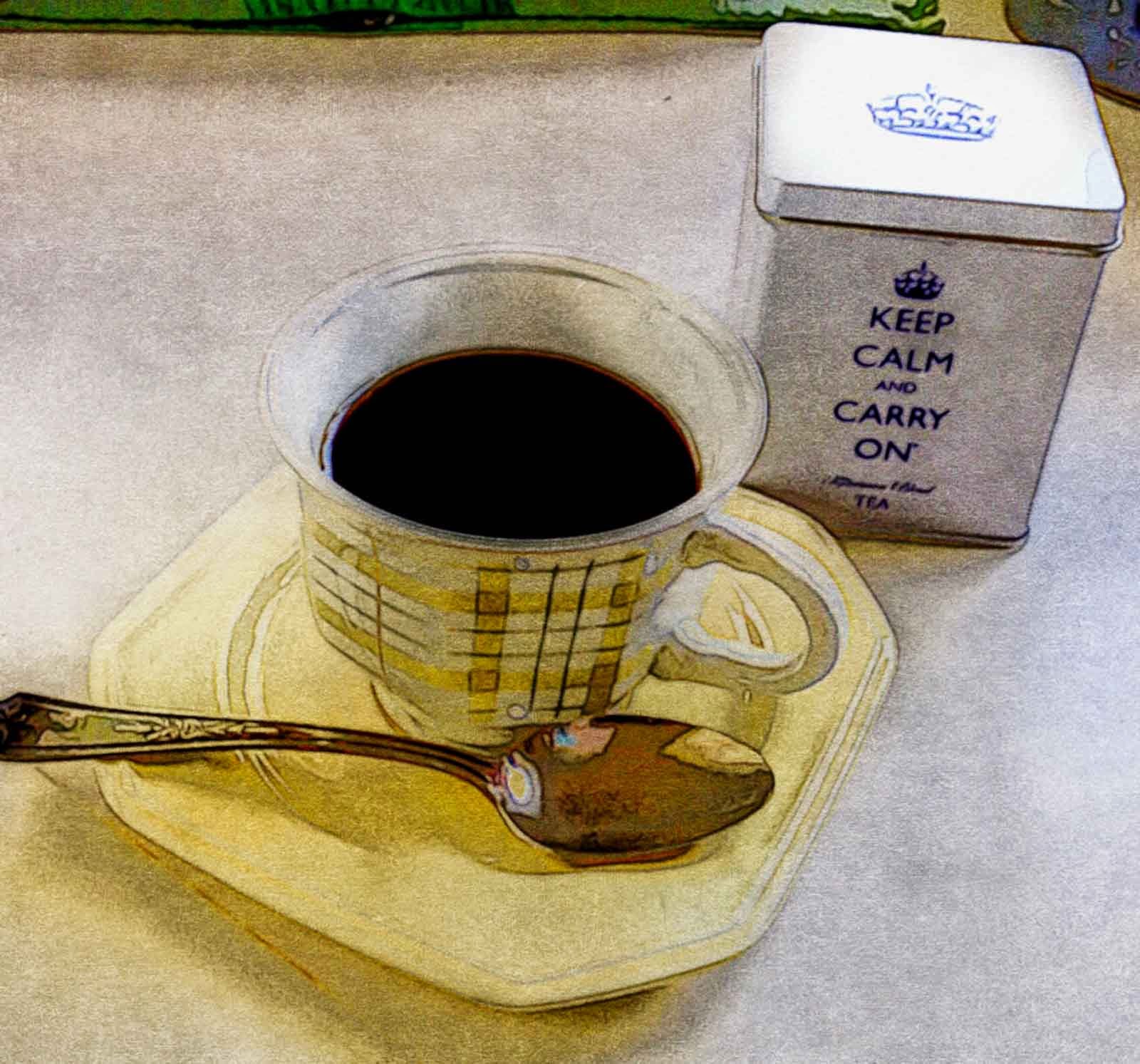 I am still here.... though I can imagine you might find that hard to believe, as I've not posted for almost three weeks! My Mom broke her hip 4 weeks ago, and has been in a rehab facility, and my husband was gone a week of that time, as his dad was in hospital in another state, as well. So we are busy, just not busy with things of general interest to others.

I had a birthday this week. I share the Queen's birthday, so I really prefer to celebrate 'Queen's Day,' as that phrase doesn't necessarily allude to the fact that I am aging. I drank a tea toast to us (Queen E and myself) on our day, in the cup I believe she would have liked me to use (no chipped 'mug' on Queen's Day!) 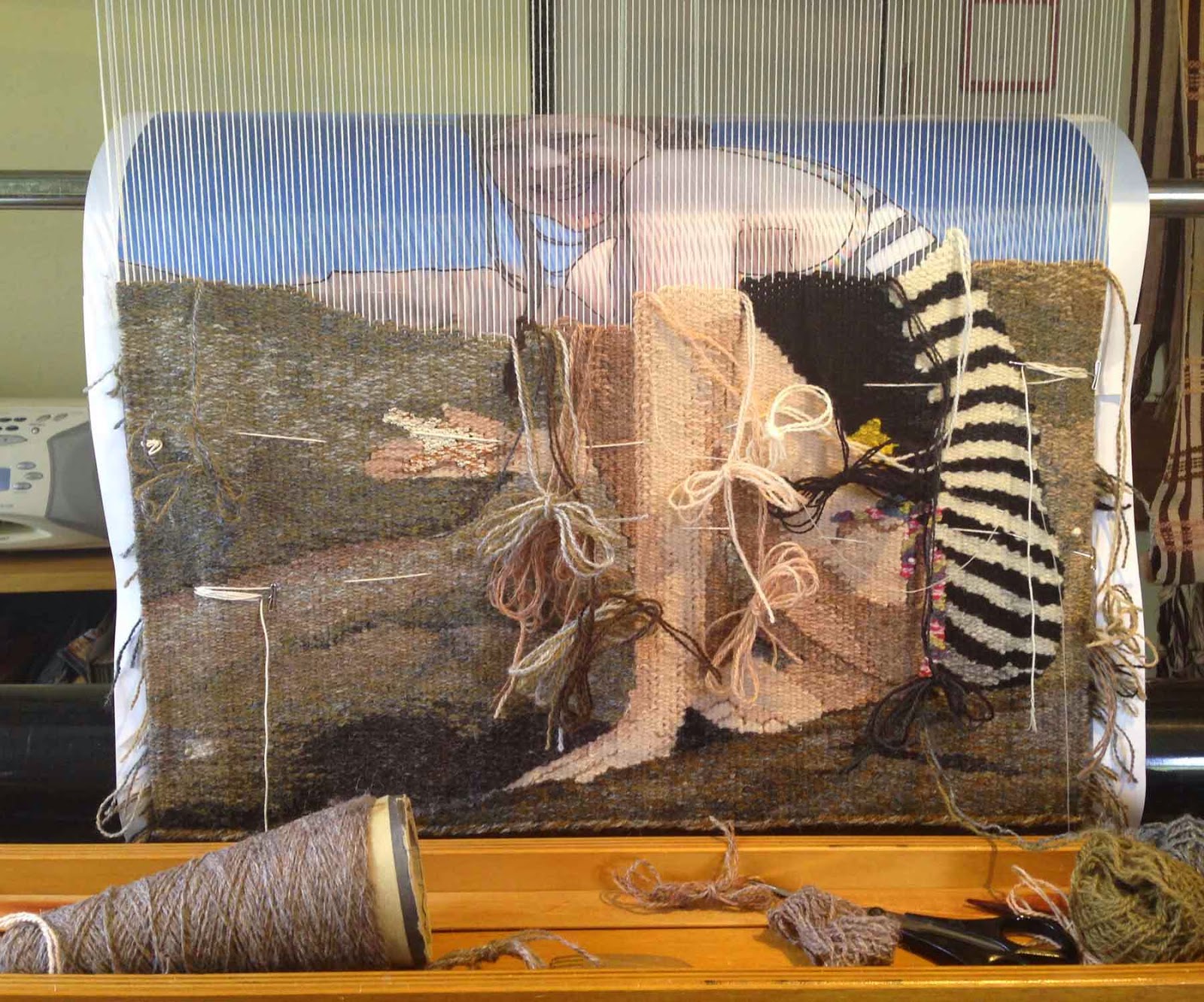 I have been sneaking in an occasional few minutes of weaving, whenever I can find time. A tapestry still is managing to grow, even though I am just weaving small snippets at a time, so it is growing v..e..r..y slowly, even more slowly than a tapestry usually grows. My biggest worry with doing it this way is that, with such non-concentrated bits of time, I lose track of what I wanted, and feel like it may not be the image I had in mind when I began the piece. But that may always happen, to some extent. It just feels a bit disjointed to weave this way, and I hope that 'disjointedness' does not show in the finished work. 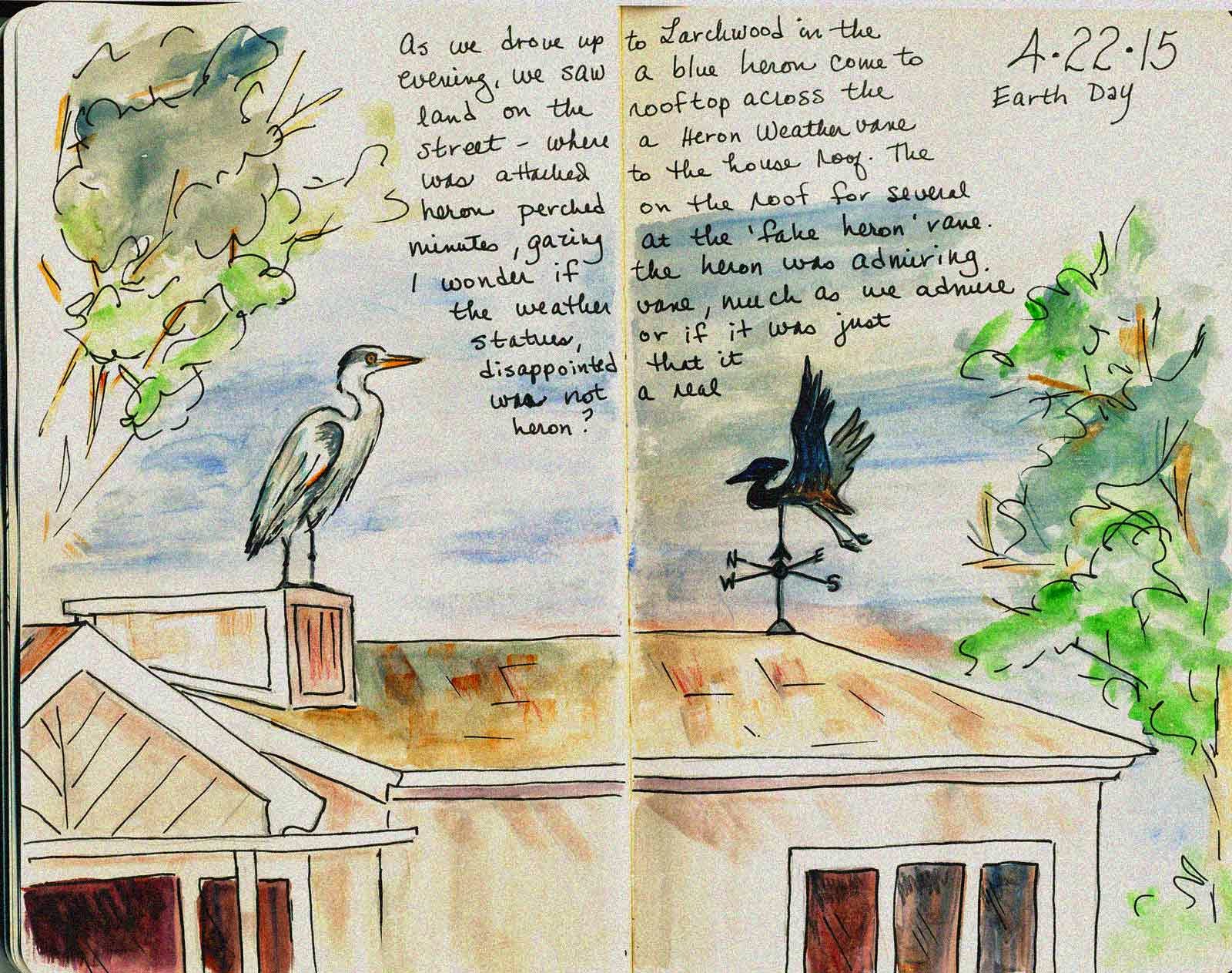 And.... speaking of things done in tiny snippets of time.... I haven't been getting much sketching done either. And the little sketches I've done are not 'artistic' in any sense of the word! They are more to help me to remember things I don't want to forget - to capture some memories. So, the sketch above was done to remember a lovely 'Earth Day' moment. Maybe you can read the story on the sketch, but it basically is of a moment when my husband and I drove over to see Mom, as we do each early evening. We saw a heron circling overhead, and watched as he landed on the roof across the street, which sports a heron weathervane! The real heron sat there a few minutes, gazing at the weathervane, as we and another person in the parking lot watched, then it flapped it's huge wings and flew away.

And, since I love to tell stories (whether in words or images):  This morning at about 4:00 a.m. we heard the unmistakable voice of Siri, saying in her dulcet tones, "What can I help you with?"  The answer; 'Meow!'  "Sorry, I'm not sure what you said," replied Siri.  I chose to ignore it, until the entire two-way conversation was repeated a few minutes later. I sat up and saw Gus, sitting on my iPad, seeming quite happy and proud that he had found someone to converse with at 4 a.m. - which has long been a goal of his. Quite a shame, really, that Siri doesn't speak cat.
Posted by K Spoering at 2:42 PM 1 comment:

A lot can happen when you are away from the loom.....

I have not been in the studio for awhile. I have been busy with other things. At the beginning of March, we went to Kansas to help my father-in-law move. Then, my Mother fell and broke her hip a week and a half ago. So we have been doing whatever needs to be done to help, whenever and wherever we can, and just trying to keep up.

The view above of our beautiful valley is from my Mom's hospital room. The whole valley could be seen, and I loved watching the sky change each day/ 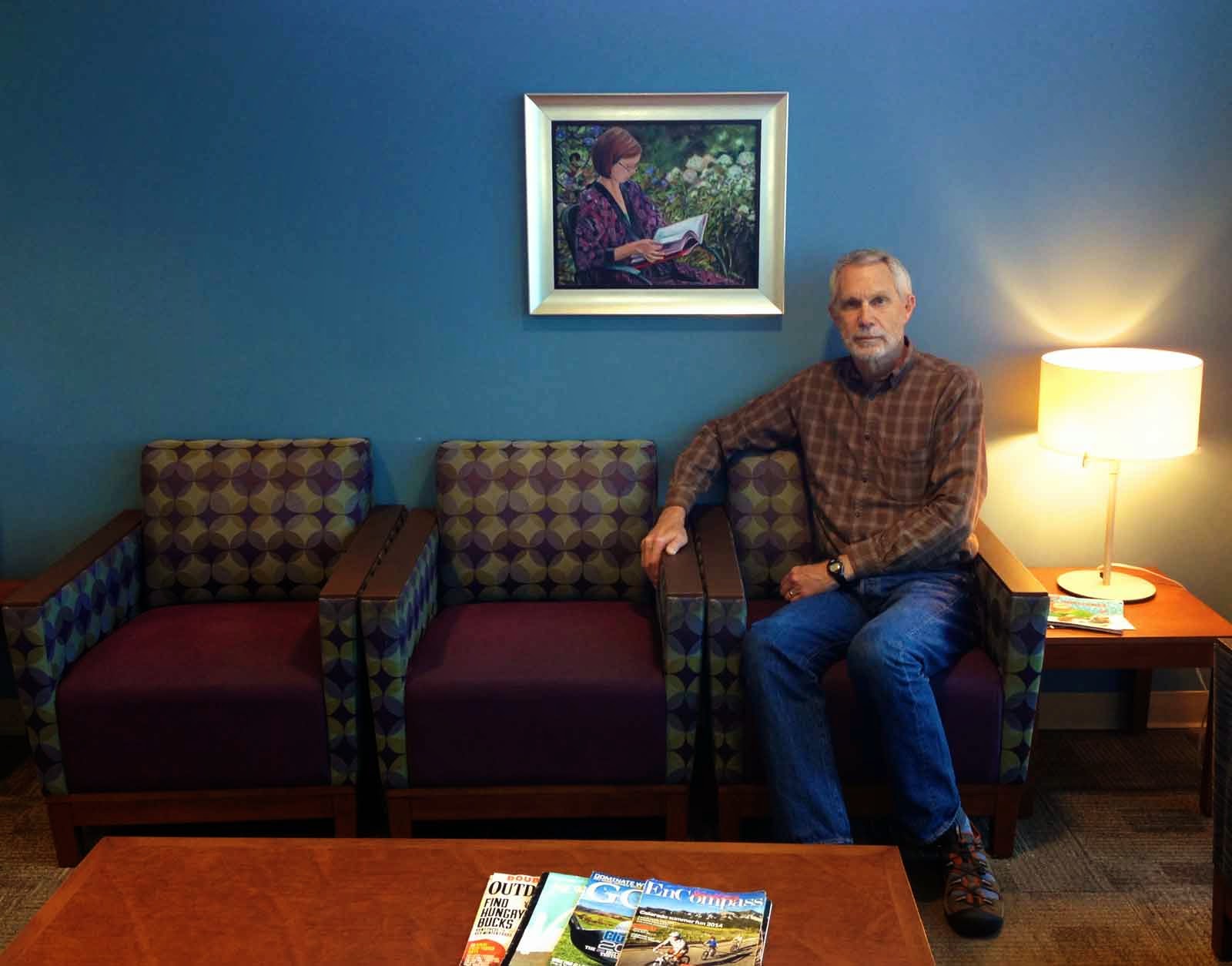 While there, my brother found my painting the hospital had purchased a few years ago. It is in the family waiting room on the maternity floor. It was good to see it again! Several people had told me they'd seen it in the time it's been there, but this was the first time I'd seen it in it's new 'home.' It looks good there! They 'matched the sofa' with it. (This is my husband, sitting there for me.) 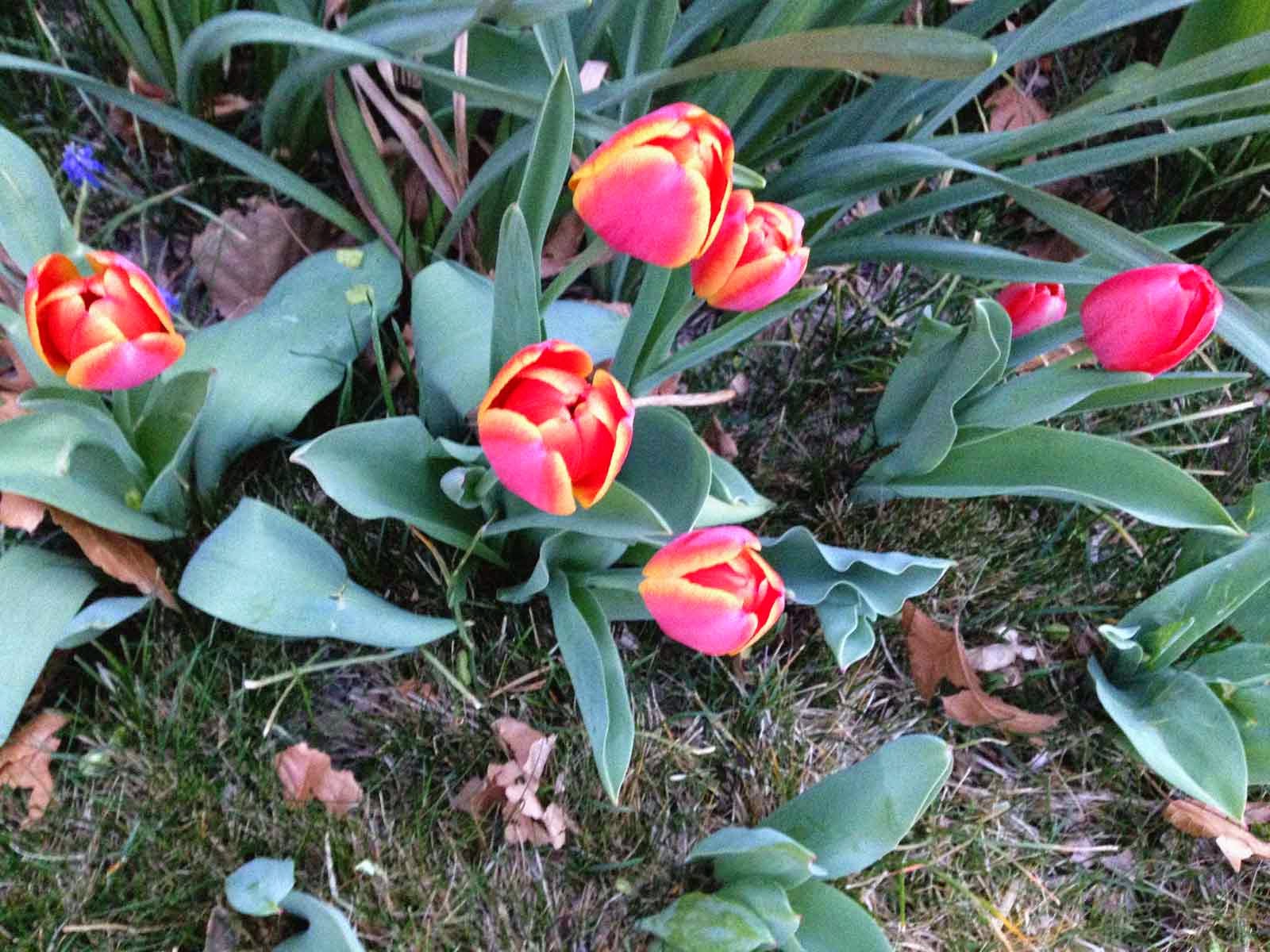 While we have been busy with family needs, spring has come to Colorado! Our apricot tree bloomed, the lilacs bloomed, the daffodils are long gone, and the tulips and quince bushes are now blooming. I noticed yesterday that my peonies are already knee-high! I need to find a bit of garden work time! And some studio work time, as well. I'm afraid I will not meet my deadline of getting the 'July' tapestry off the loom by the end of this month. I'll just do what I can, and will try not to worry about what I cannot do, I guess.
Posted by K Spoering at 11:54 AM No comments: