I recently filled my 2015 sketchbook. It's the one the middle in the image above. It is a Moleskine Sketchbook, and since they changed the paper, I have hated it all year long, and my sketches show both that dissatisfaction and the stress that the past year has involved. So, it is not my favorite sketchbook. I looked through my past books, and discovered (which should not surprise me at all) that a Stillman & Birn sketchbook I filled in 2013 is my favorite! It is the one on the left, above. I even like the cover I did on it in collage! I have a new Stillman & Birn, and I will begin it with the new year. In the meantime, I have begun a Strathmore Mixed Media sketchbook that a friend gave me. It is accepting water media well, so I am hopeful that I will enjoy it, as this year ends. 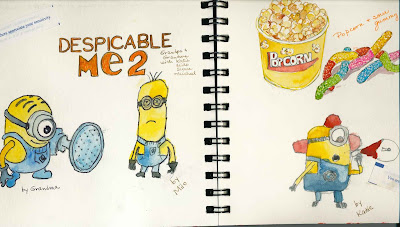 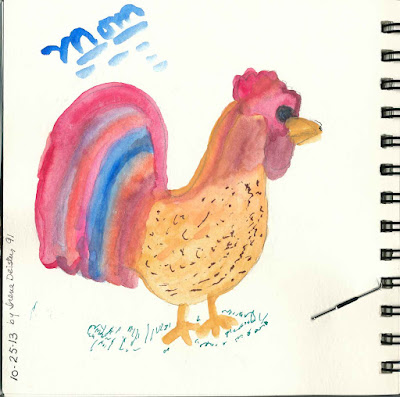 One of the things I most liked about the Stillman & Birn book from 2013, was the fact that I allowed others to sketch in it - knowing that whatever media they used, it would not buckle or balk. So my grandchildren sketched in it, and my Mother did the sketch above - my favorite page of all! Both of these sketch pages bring back good memories for me. I think 2013 was a pretty good year, and it shows in my sketchbook. 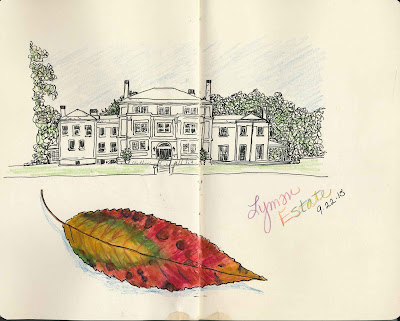 This is my favorite sketch in the 2015 Moleskine. Again, it brings back memories of a good day with my son. I also like that I 'composed' the page a bit; something I had done throughout the 2013 book, but did not bother much with this past year. 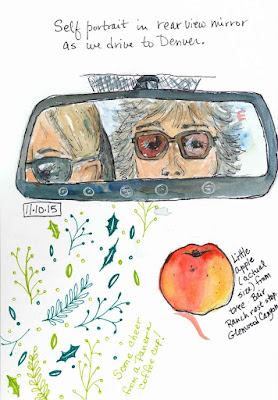 So I have now begun the new sketchbook. I always begin and end a sketchbook with a self portrait. I began this book while we were driving over the mountains to take my Dad to the airport. So I was in the backseat, behind my husband, with nothing to do but sketch myself. (It was not really a very good plan, as I get carsick when I try to 'do' anything in the car. So my selfie looks a bit peaked, don't you think?) 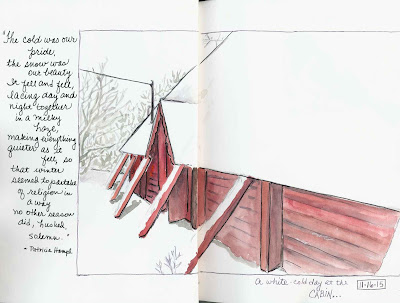 This sketch was done at our cabin a few days ago. Mostly all white snow, but I wanted to try this difficult perspective of the cabin. I am liking the pristine paper, and I have not yet spilled coffee on the book, which is pretty amazing! 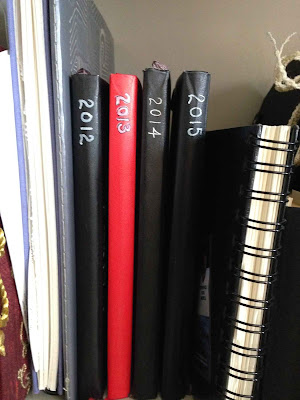 My shelf of sketchbooks is growing. This photo doesn't show the several oddly sized or shaped books I did before 2012, or my travel sketchbooks, or the handmade book Booker actually ate (fortunately with just a few pages filled.) A picture truly is worth a thousand words, and, though I also keep a journal (and have done so far longer than I have filled sketchbooks,) the images in these books are a savoring of Time, like no other thing is; neither journals nor photo albums can compare. 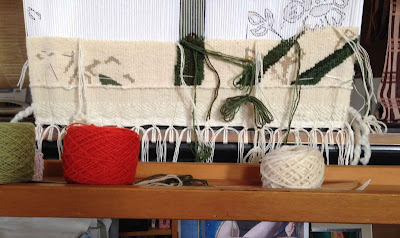 I have also been weaving. I have about 2 1/2 inches woven on the "December" tapestry. Not very interesting to look at, so far, but the process is centering me, once again. Nothing feels 'right' to me like sitting at the loom, passing the weft through the warp. 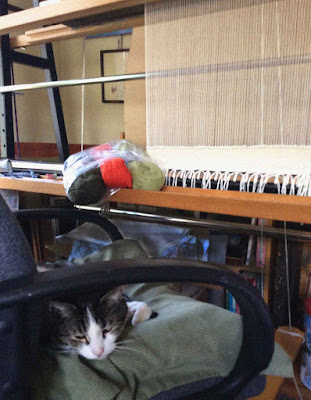 The loom is warped. The new yarn colors I needed came in today's mail. Now, all I need to do is get Gus out of my chair and I can begin the new tapestry!
Posted by K Spoering at 1:46 PM No comments: