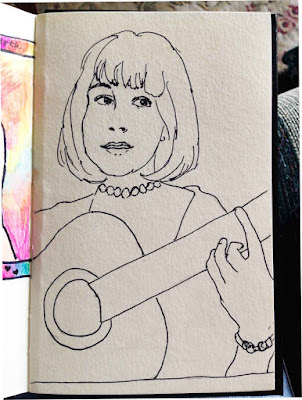 I have still been enjoying sketching guitar players from the Sketchy app. Here is how I work, with a simple line drawing to begin with, then added watercolor or watercolor pencils. 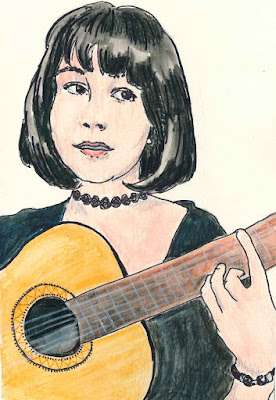 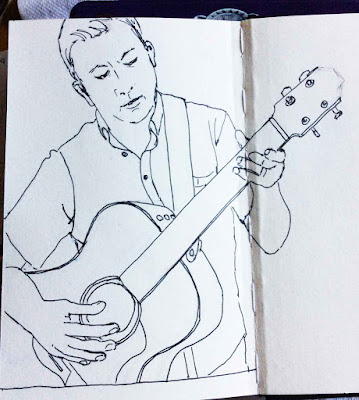 After doing a number of guitar players who are total strangers to me, I decided to brave-up and sketch the guitar player I play and sing with. It is pretty scary to sketch someone you know, and it is harder than sketching a stranger. 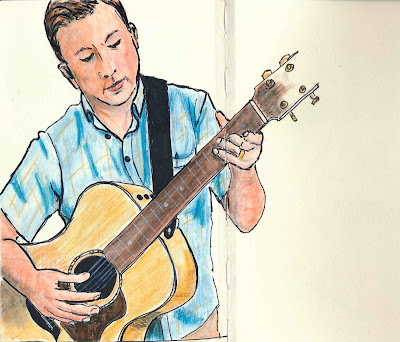 Even harder, is to sketch myself! But I begin and end each sketchbook with a self-portrait, like it or not. And this happened to be the last spread of my current sketchbook, so I added myself in my Taylor Guitar cap. My husband told me the cap and the glasses look like me. The rest? Not so much, according to him. 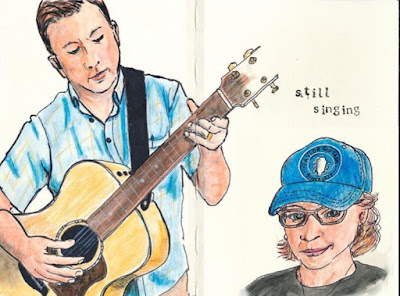 But another sketchbook is filled, and on the shelf! I already have a new, empty one, just waiting for me to pick it up and make my messes in it! 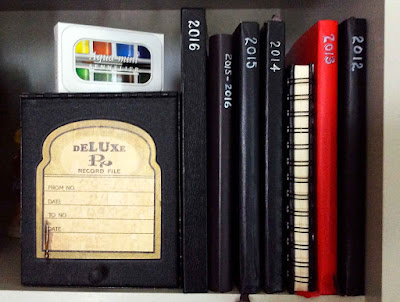 Posted by K Spoering at 5:19 PM No comments:

A Few Pages From My Sketchbook, and a Piece of My Mind..... 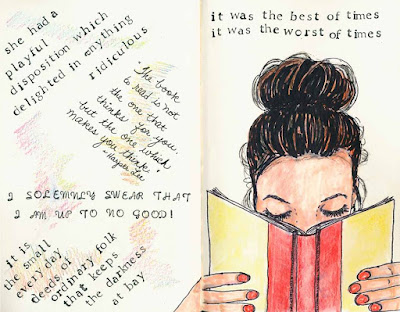 I have had a large blessing of houseguests recently, which is typical in Colorado in the summer, and is much more frequent for me since my parents moved here, almost two years ago. I cannot weave when I have houseguests; too many other things needing doing, and too many interruptions for such a solitary pursuit. But I have found small moments to sketch. All of these images are inspired by photos people have shared on the Sktchy app (#sktchy.) 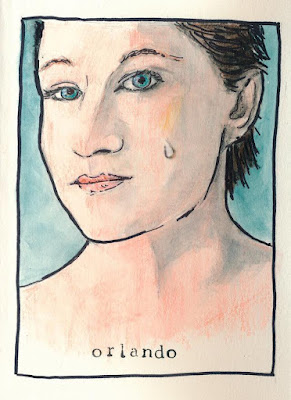 These two bottom sketches were done after the horror of the latest mass shooting in Orlando. I am getting pretty angry about the regularity and persistence of these events. Although I try to keep politics off this blog, more and more I am convinced that we DO need a Grandmother in the White House now. Grandmothers care about the lives of loved ones; our own and the loved ones of others. Maybe Congress should also be filled with Grandmothers. Wouldn't our world be a better place if the love and experience and wisdom of a lot of grandmothers were in charge? Just the thoughts of a very concerned grandmother for you to chew on today..... More from my sketchbook..... 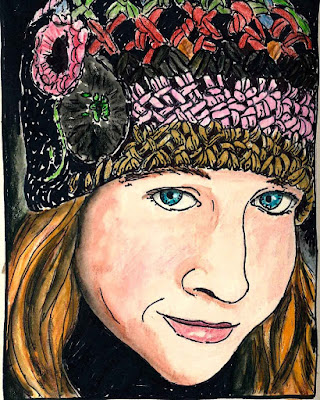 While I am finding it hard to get into the studio to work, as we have been having frequent houseguests, I have been doing a bit in the sketchbook. The reason I can do one and not the other, is that my weaving time needs to be longer, more intensive, and without frequent interruptions, or I find myself making errors that take more time to correct than they did to create!

Sketchbook time can just use bits and pieces of time - moments, even. I usually sketch out a page somewhat tentatively in pencil,  over my morning coffee. Then I can just sit down with it in moments throughout the day, and add color to the skin, or do a small amount of detail work here or there. Five minutes here and there adds up to a simple sketch over a day's time. I can also work on a sketch while on the phone or while watching TV - an impossibility while weaving.

Anyway, here are a couple more from last week's sketchbook. The top image was inspired again by a photo on #Sktchy, and was submitted for the weekend challenge, which was 'texture.' Of course I had to do a fiber texture (the crochet cap)!

The sketch below is of two of my grandchildren. I'm not as happy with it as I am with the others. It is so much harder to sketch people you love, and the results are rarely satisfactory. Sad, but true for most everyone I know who sketches or paints. 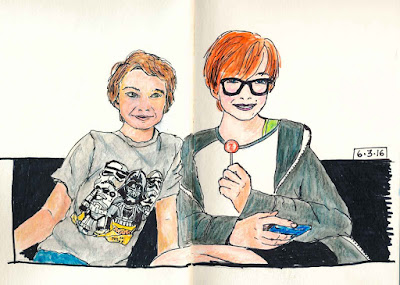 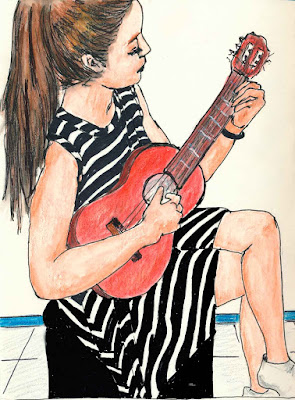 I am so confused! I do frequently find myself in this state, I admit, but I have decided to admit to this confusion, and confront it. I also believe there may be others I know - artistic and creative types - who will recognize and relate to my confusion.

It started (or this 'episode' of confusion did) with a few photos of my grandchildren I want to sketch. I generally have a block about sketching people I know, because I am rarely satisfied with the end product. So I decided to sketch total strangers. I have had an app on my iPad for quite awhile, called Sktchy. People post photos of themselves there, and artists sketch them and post the sketches next to the photo inspiration.  I don't totally understand all the ins and outs of the app, but yesterday I posted the above sketch, and within an hour it was a 'Sktchy Pick' (still not sure what that means) and at this point, less than 24 hours later, the sketch has 170 'Wow's' (the Sketchy equivalent of a FaceBook 'Like')  and I have 36 'followers,' and several people have asked me to please sketch them.

Great - right? That was my first thought. But then the shy person in me cropped up. Why do I care if all these people I don't know like my sketch? I got 'protective,'  thinking I don't want to have to please a bunch of strangers, and all these 'wows' puts pressure on what I post in the future, doesn't it? But then I thought, well that's just silly! Most of the folks who see my art in exhibits are strangers; most of the folks who have purchased my art are strangers. That is true for most artists. It just seems strange to me, I guess, to do this on social media. It seems like an ego thing - like I'm posting it for the 'likes' and 'wows.' And I guess, in some ways I am. I have seen several artists make their reputations on social media. With fewer galleries out there to put our art in, perhaps this is the only way for an artist to go anymore... Get all the 'likes and wows' you can, then start sticking price tags on your online work.

At any rate, this morning I did another Sktchy sketch. I had found two women with ukeleles, and wanted to sketch them on facing pages in my sketchbook. I have not yet posted this sketch on Sktchy. I think I'll let the other sketch get lost in the crowd of new works first (it is still getting 'wows!')

I did enjoy doing both sketches. I did them simply and quickly. No gimmicks;  just ink, watercolor pencils, and a black marker. I think that is what I like about them, and maybe what others like as well, the simplicity of them. And just maybe the fun I had doing them shows up, as well. I hope so. 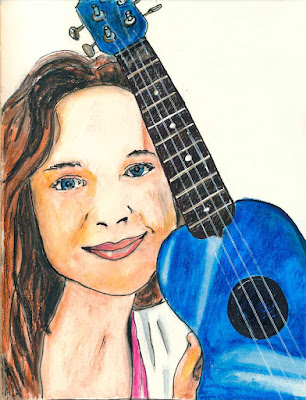 Posted by K Spoering at 2:38 PM No comments: