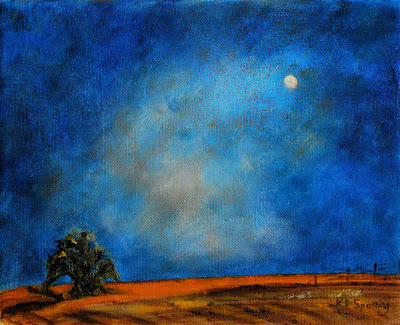 As we drove across the great Kansas prairie, I realized that it is very beautiful. That may seem an obvious thing to many, but I grew up in Kansas, and I grew up longing for the mountains of Colorado, where I was born. I did not appreciate the flatness, the seeming endless emptiness, of the Kansas landscape. But I have come to appreciate that vast open space as the world has seemed to become crowded and full. I can now see that the prairie landscape has a zen-like peace to it. Sitting in the truck as we passed through a thousand miles of prairie cleared out some of my cluttered soul.

The moon was almost a full one throughout our trip, and it seemed to rise very early, with no mountains blocking it's arrival. I am not sure that I captured all that I felt about the moonrise and the prairie in this little 8x10" painting, but I am glad I gave it a shot. The larger paintings I have been working on, though they are not landscapes and I began them before our trip, also are 'filled with emptiness.' It was good for me to see how beautiful something can be without having to be 'full.'
Posted by K Spoering at 11:45 AM No comments:

First crack at the prairie...

I did this small painting to warm-up yesterday. It is 4"x12" on a 2" deep gallery wrap canvas, with the sides painted to blend in with the front, so it won't be framed. Fun to do!

My goal with this little piece was just to capture the simplicity of the autumn prairie. In fact, I may call it "Autumn Prairie #1," as I'm sure I'll try more autumn prairie pieces. I also started an 8x10" prairie painting. It's not ready for prime time yet, though. I am attempting to show more of 'the artist's hand' in it, and have not yet pleased the artist!
Posted by K Spoering at 10:46 AM 2 comments:

Road trippin' with an artist.... 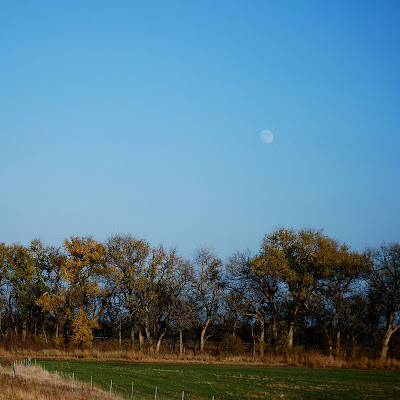 We just got back from a road trip from western Colorado to eastern Kansas, and back. It was a quick trip, though a long one in miles; which means we spent a lot of time just driving across the two states. I discovered that I could put my camera, a Nikon D60 digital SLR, on the 'action' setting (since we were moving) and using the long lens, I could get some fairly decent shots! 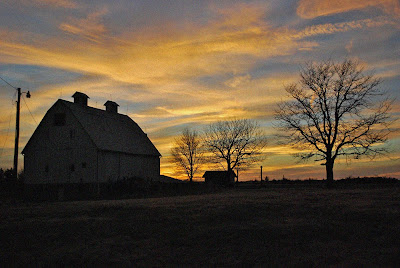 I ended up taking 1300 pictures, almost a photo for every mile we traveled! I took a lot of hay bale and barn shots, a number of prairie hawks, sunsets and moonrises and lots of 'big sky.' 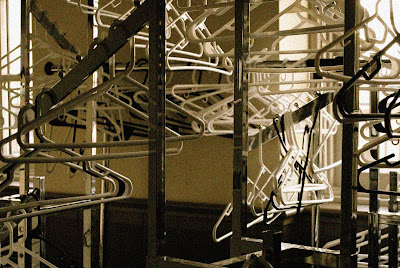 Though I took very few inside photos (as our inside time was more family oriented), I did take this photo that I like of coat hangers in a train depot/museum we went to. 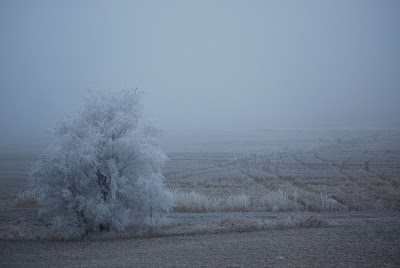 I took most of the pictures on our way back home. The first day, all across the plains and prairies of Kansas and eastern Colorado, there was a heavy fog all the way, and it was so cold that the fog had frozen. The simplest things were made beautiful. 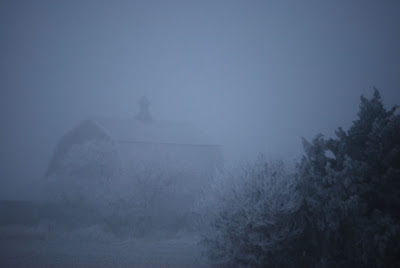 When the sun finally came out, it too made the cool green winter wheat and the frozen ground glow. 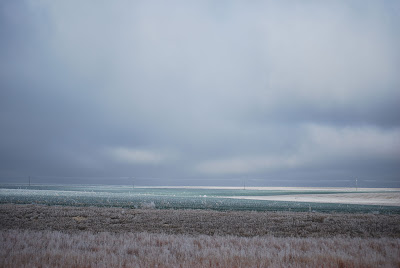 Our second day of travel home was across the Rocky Mountains. As bad weather was forecasted all the way, we headed out early. The sun was just rising, sending an orange glow into the oncoming snow clouds. The effect was very surreal. The photo below shows how the orange sky began, and there is another shot of it on my other blog here. I don't think I've ever seen a sky like it! 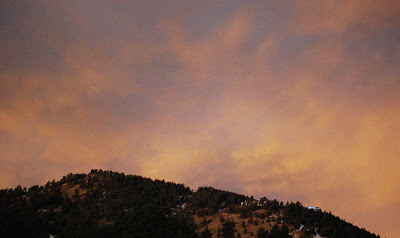 As we crossed over the continental divide, two moose cows came out of the trees to cross the road. I was so glad I had my camera ready, as these are the first moose photos I've ever taken, though I have spent a good deal of time in moose territory. I hope they either made it across the road safely, or turned back. I've never heard of moose being in that part of Colorado. 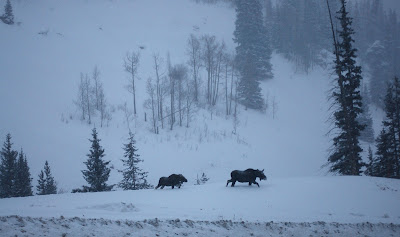 As we got closer to home, the sun finally came out, showing the snow the clouds had left behind. 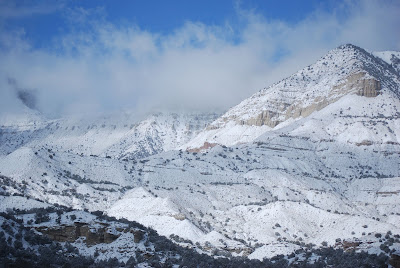 I always know I am 'HOME' when we can finally see the top of the Grand Mesa coming into view. 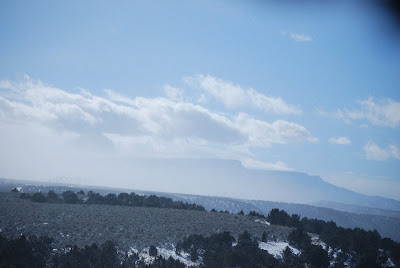 From all the photos I took, I have a number that are already inspiring paintings. I could hardly wait to get to my easel to start a few of them! I also hope to find inspiration for a 'November' tapestry among them. I'll keep you posted, but will spare you the rest of the 1200+ photos!
Posted by K Spoering at 4:30 PM 1 comment: 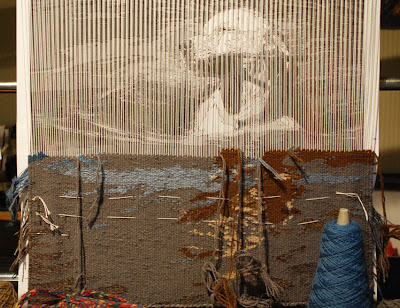 Though I am about a half inch shy of the half-way point of the August tapestry, I did get it all evened up the other day. Then I began working where the blues begin, and, as it was dark, I decided I'd best quit until I could see my color choices better. (This is not a good photo, color-wise. It is dark and snowy today, so I had to turn on the artificial lights to shoot it.) 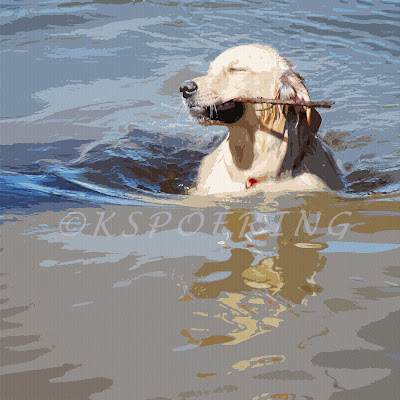 This is the cartoon I am working from (minus the copyright watermark, of course). I don't think I've ever posted it before now. As you can see, the lower half is more greys and browns, and the upper half is more blues. I was concerned about this half-way division, design-wise, but I am making sure to put some of the blues from the upper half in the lower portion, and vice versa, so that the top and bottom will be sure to look like they 'belong together.' 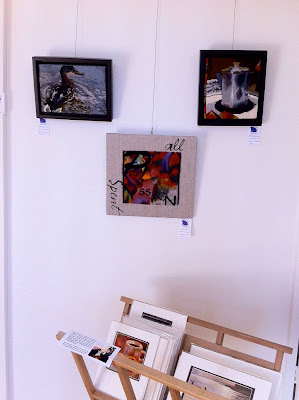 I worked all day at the Blue Pig Gallery yesterday. It was the opening reception day for the "Little Pigs" miniatures show/sale. We were VERY busy all day, and made a lot of sales! I had decided that I would hang some of my small tapestries, in addition to the small paintings. These are the three that are there now: "Milo's Duck," "Still Perk-y," and "All Passion Spent." It was gratifying to have a number of people tell me they were happy to see that I had some tapestries there, as that is what they want most to see from me. (By the way, as they are now 'officially for sale,' if anyone is interested in any of these, let me know. Post a comment with your email address, and I will email you directly rather than putting the comment on the blog.) Several people also told me that they saw a bit in the newspaper this past week about my piece being in ATB8. Not only did I miss the bit, but that seems to be the day's paper that my husband built a fire with at the cabin!

It is snowing out. I have a doctors appointment, then must get ready for a trip later this week to see my in-laws, so I'll probably not get back to the loom with any persistence until Thanksgiving Day. I hate stopping, when I just felt like I was getting a good start again at the loom! But that is how life weaves sometimes...
Posted by K Spoering at 9:01 AM 3 comments:

Creepin' up the warp slowly... 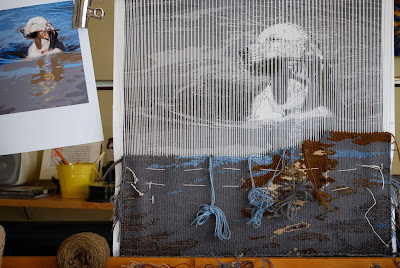 I will soon be at the half-way mark on this tapestry. About time, I say! This lower half has been easy weaving, actually, but life just keeps intervening and interrupting my weaving time. I have been doing 'other necessary things,' but have been suffering for it! Weaving helps me deal with all of the 'other necessary things,' so when they keep me from weaving altogether, I get a bit fussy.

The fall yard work is not done. I do have a number of 'other necessary things' calling my name loudly, but yesterday and today I have turned a deaf ear to them. I am at the loom, weaving. I hope to reach that magical and inspiring middle mark by the end of today! About an inch and a half more, and I'll be there...
Posted by K Spoering at 11:20 AM 1 comment:

More small stuff to go to the gallery... 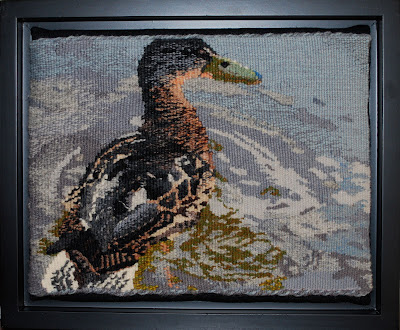 As I work at the Blue Pig Gallery on Saturday, I've been getting a few more pieces ready to take to hang for the miniatures show/sale. As I am primarily a tapestry weaver, I'll be hanging a few small tapestries among my paintings. I framed the duck and the percolator (each 8"x10") in black frames that makes the piece 'float' within it (hard to see in the image.) I like the effect. 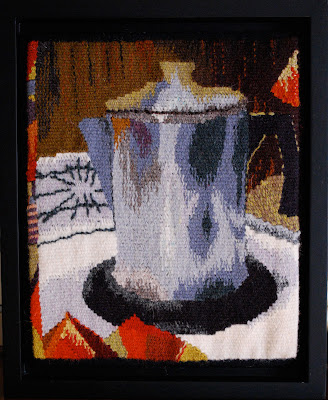 As small pieces are where I experiment a bit, both in tapestry and paint, I also did the two paintings below. They are on wood, with the wood grain showing through a bit. The cat is on an uncradled 4"x4" piece of birch. 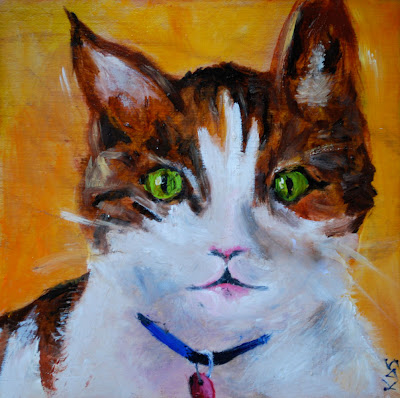 The cups below are 6"x6" and are on a cradled piece of maple. 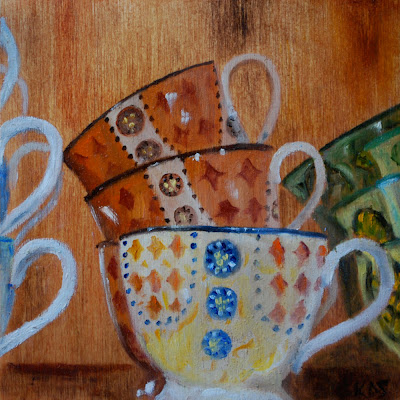 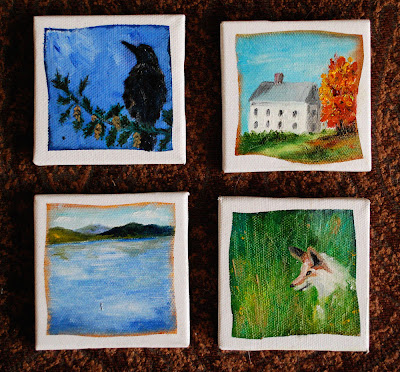 I did a few of these tiny paintings (2"x2") just for fun, for the miniatures exhibit at The Blue Pig Gallery. I will be hanging my small work today, a bit late, as I should have done it Sunday, or before. I'm still feeling a bit dizzy, though, with the double ear infections. Yesterday I was afraid to drive that way. Must risk it today, though, as this stuff has to get hung!

I had thought I had plenty of small pieces set back for this show/sale, but when I pulled them out yesterday, I discovered that I am hopefully wrong. Hopefully, because if anything sells, leaving a blank space, I'll be in trouble! And I of course am hoping that will happen. So I'll squeeze some paint back on the palette this afternoon and do some more small pieces. Maybe not quite as small as these 'tinies' though!

I am thinking I'm in the mood to paint cups. Painting cups is like comfort food to me, or I guess it would be 'comfort creating.' Whatever.... it's soup and bread for lunch and cups to paint in the studio. Ahhhh. All I need now is my cozy sweater on, a crackling fire in the grate, a cup of coffee nearby, and a hunk reading me Jane Austen... uh, maybe I'm getting a bit carried away with this comfort thing.
Posted by K Spoering at 11:38 AM No comments: