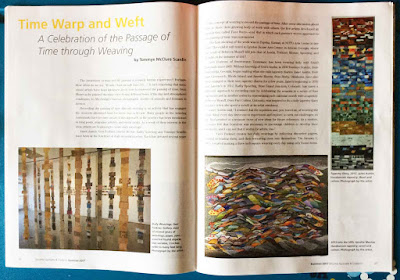 I just got my copy of the summer issue of 'Shuttle, Spindle, and Dyepot,'  the Handweaver's Guild of America magazine. In it is a great article, written by Tommye Scanlin (THANK YOU, TOMMYE!) about the "Time Warp and Weft' exhibit that was held in Kansas at the end of last year, and will open in Georgia in June. 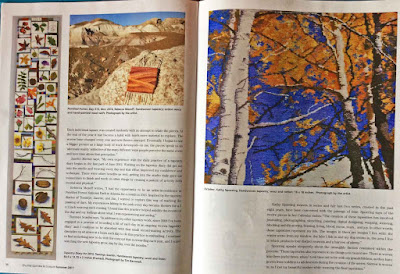 The exhibit will showcase the time-related works of Geri Forkner, Janette Meetze, Janet Austin, Tommye Scanlin, Rebecca Mezoff, and myself (listed in the order that the photos from the article are shown.)

I won't get to attend the exhibit in Georgia, unless my summer plans change, but it was a well attended and much loved exhibit in Kansas! My twelve Calendar Series tapestries will all be together there, and I feel so blessed to have a place to show them altogether again. It probably will not happen after this, as they are now for sale, and several are already spoken for.

If you get a chance to read the article or see the exhibit, let me know what you think! Six artists have woven their lives into the work to be shown there, and that is definitely the feeling that viewing this show evokes. 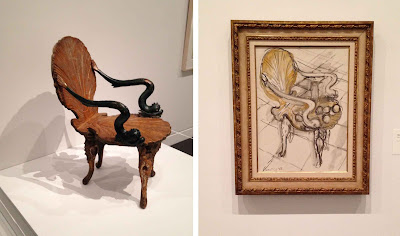 I have spent most of the past couple of weeks away from home, spending time with my sons and their families. The time included climbing gyms, soccer games, track practice, a granddaughter singing the national anthem at a pro-baseball game, a gourmet brunch, a menagerie of grand-pets, and a Matisse exhibit at the Boston MFA. 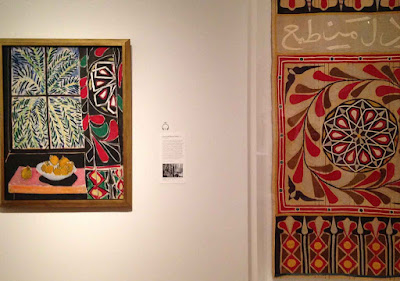 The Matisse exhibit is called 'Matisse in the Studio,' and it includes not only an amazing collection of Matisse's works, but the objects from his studio that inspired him.  Photos were allowed, so I shot photos of several of his wallhangings (he was a collector of fiber from all over the world,) several chairs and side tables, a beautiful turquoise vase that he included in a number of paintings, and his cocoa pots, which were also frequently painted.

From these photos, I did my own sketch in my sketchbook (below.) Even though I wasn't looking at his paintings as I sketched, it is obvious that Matisse has a firm hold in my brain! I was surprised at how much my little sketch of his objects said 'Matisse!' 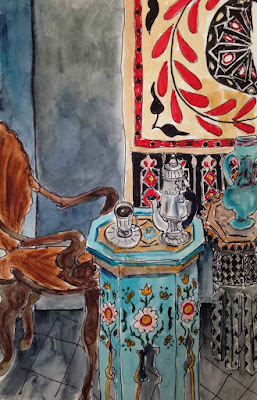 I love the Boston MFA! I especially love the American wing and the Impressionists, so I spent some time there with my old friends. The Museum also had a special exhibit by their local favorite author, Robert McCluskey, to celebrate the 75th anniversary of his book set in Boston, Make Way For Ducklings. The exhibit was wonderful, and I discovered several of his books I hadn't read! 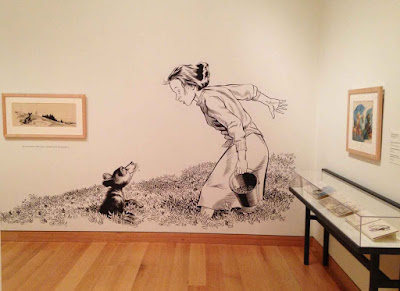 In addition, I hadn't seen the Museum's new piece by Dale Chihuly, an amazing glass 'plant' that is three stories high, and set in a place where the sun shines through it, making it glow. Truly lovely! 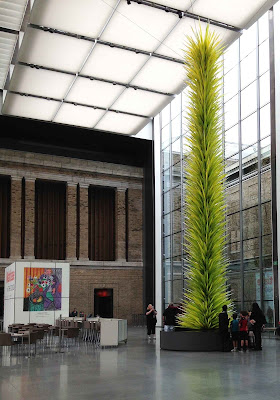 Now that I am back home, my empty loom is taunting me. It is especially calling to me because I have had the design for my next tapestry in my head for such a long time - since the night the election results came in, in fact. So, this morning, I got it out of my head, into the computer, and printed out to be taped together in cartoon form. Here it is (15 sheets of standard sized paper) laid out to be taped. The tapestry will be the largest one I've woven in quite some time. It will be 32" wide, by about 24" high. I am looking forward to rewarping the loom after I clean the studio today, and getting back to my Work. All play and no work can only go on so long. 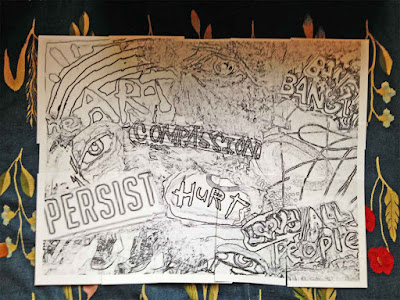 Yesterday, I spent the day (and a LOT of money) packing and shipping all of my Calendar Series Tapestries to Georgia for the 'Time Warp... and Weft' exhibit that will be there this summer. I will let you know more about that very soon.... but, if you are in that part of the world, start making plans to go see it!
Posted by K Spoering at 11:33 AM No comments: