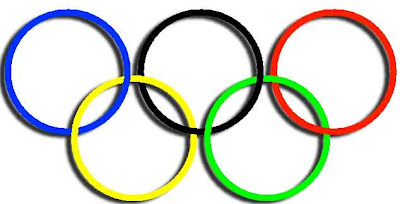 I love the Olympics. Winter or summer, it really doesn't matter; LOVE them all! My Olympic-love started when I was a young mother in 1980, with a toddler and a baby and a husband who was finishing up a residency and moonlighting so we could buy a house, so he was never home. We also lived in a big hockey town, though I would never have considered myself a hockey fan. You know where this is going, don't you? The "Miracle on Ice" that was the 1980 US hockey team. I sooooo got into that, and I have loved the Olympics ever since! 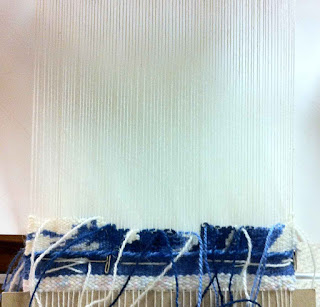 So now, I have an empty nest, and a husband who did not share that experience with me (or the rest of the nation, because he was working.) I sit in the evenings during any Olympic coverage, occasionally joined by my husband if the event is biking or if he has nothing else to do. I cannot sit and watch TV without having busy hands, so I usually start a knitting project. 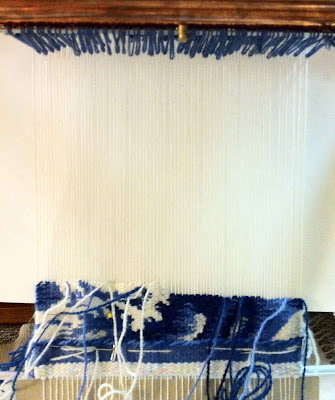 But this year, I have a warped Mirrix loom, and a cartoon all ready to go, so I have decided my Olympic event will be Olympic Weaving. (I get a Gold medal if I complete the project by the closing ceremonies.)

The warp is about 8"wide, sett at 12 epi. I am using singles, so the going will be slow, but it will only be about 11" long. The top photo shows what I achieved during the Opening Ceremonies. The second photo shows last nights progress, during swimming and men's gymnastic events. I get more woven during things like beach volleyball (not my favorite event) and less done during gymnastics. None is even attempted during biking events, no matter how long they are. So I got about an inch woven each evening. OK, I know that's not much for the 3+ hours of coverage, but I am paying pretty close attention to the TV, too.

The weaver is slow, but determined. She keeps up a steady pace, accelerating during commercials. I believe she will make it; and not only make it, but will medal in this, her only event. The competition (for her attention) is pretty fierce, but she has the experience, the drive, and the endurance to succeed. Will she get her Gold Medal? Will we be hearing her anthem played (Carol King's "Tapestry")? Or will she have to settle for a lesser medal, or even none at all? Stay tuned....We will be watching her closely, and will update you on her progress as her quest proceeds over these next few weeks. 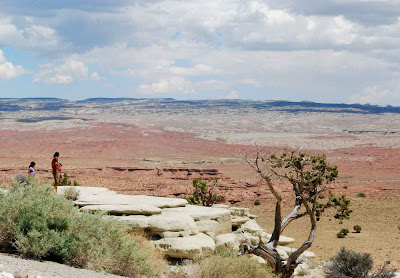 We are home from a trip to California. I taught a one-day workshop at Convergence 2012, in Long Beach. I did not take any photos of the seminar, but I truly enjoyed the lovely and creative women I spent the day with.
We drove this time, and our trip that direction begins with a loooong day through the desert that is western Colorado, Utah, and Nevada. It is a beautiful, stark, unchanging view. 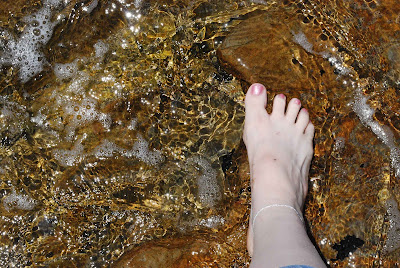 I have been to California several other times in this past year, but on those trips was just able to see the Pacific ocean as I passed over in a plane. This time, I was determined to get my feet wet! My brother and his lovely wife and daughter took us to the beach at Laguna. The waves crashed and the scene was very Californian, so my wet sandy feet were happy. 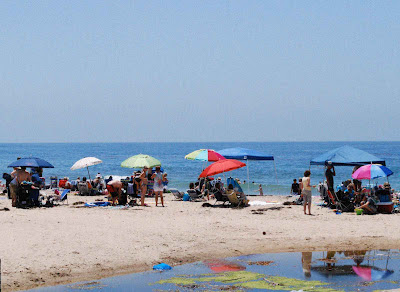 One of the other things we got to do with my brother's family was to go to the Pageant of the Masters and the Festival of the Arts in Laguna. It was pretty amazing. The Pageant includes living reproductions of art by famous artists. This years' work included Van Gogh, Norman Rockwell, Winslow Homer, and more, and it always ends with da Vinci's "Last Supper.' No photos were allowed at either the Pageant or at the Art Festival, of course. 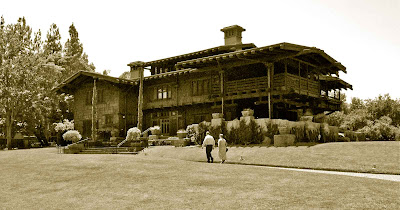 We also finally got to the Gamble House, designed and built by the Greene brothers, in Pasadena. We have wanted to see this house for years, and it was worth seeing! Again, photos weren't allowed inside. It is a stunning Arts and Crafts home that has been very well preserved. 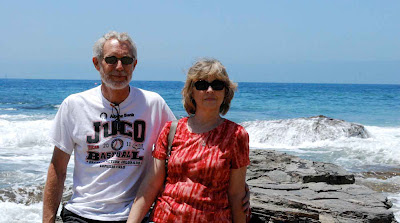 It was wonderful to get to Convergence at Long Beach; to meet new friends and to see some old ones. It was great to spend some time with family. I loved being at the ocean, as I always do. Seeing new art work and a new way of presenting art was inspiring. But it is also very good to be home. I am ready to work in my studio and at my loom again. I even have some new work running rampant through the brain, hoping to make it's way out to canvas or loom. So stay tuned.....
Posted by K Spoering at 10:25 PM No comments:

The Earth Cries in Drought.... 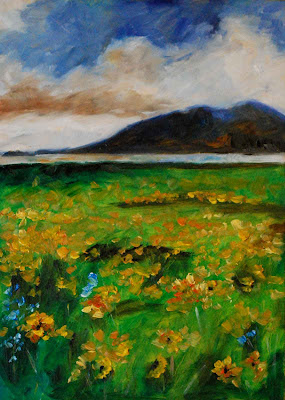 We recently went up to our cabin on the Mesa east of town. We were to be there for four days, which is longer than we usually get to stay. I excitedly packed my paint supplies; oils, canvases, brushes. My plan was to go down to the lake and set up my travel easel and paint the lake, which is usually surrounded by beautiful fields of wildflowers at this time of year.

But when we got there, all we saw all around the lake was brown. The lake is lower than usual, due to our dry winter and spring. And the usual beautiful blooming flowers were just dry brown leaves. What a disappointment! Not only because we love the flowers, but there went my plan of sitting and painting the beautiful lake. Who wants to paint brown? In fact, even the sky was grey and sad while we were there. I think it wanted to rain, but it has forgotten how.

So I got out a photo I had taken last year, when a wet winter had resulted in beautiful Mule Ear Daisies as far as the eye could see. And I sat in the cabin and did a small 5x7 painting of what I wanted to see, but didn't, at the lake.

In the evenings we listened to news of wildfires all over the state. This has already been the worst year ever for wildfires in Colorado. Thousands have lost their homes to the fire. So I will not grieve over the loss of one weekend's painting time. But I am praying that the fires continue to lessen, and that rain comes to end the drought, and to make the lake laugh in flowers again (to loosely quote Mr. Emerson.)
Posted by K Spoering at 11:03 AM 2 comments: 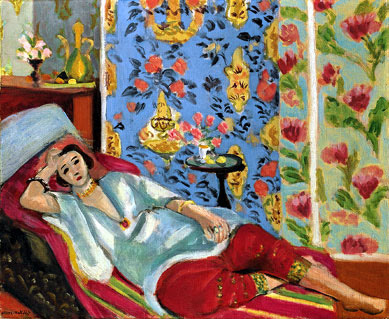 When I was in Paris, I saw several Mattise paintings at both the Orangerie and the d'Orsay Museums.  The exhibit in the Orangerie that included the Matisse paintings was an exhibit about the influence that Debussy's music had on the art of his time, and vice versa. 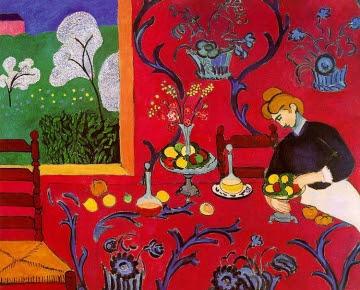 A few years ago, an exhibit came to the Metropolitan Museum in New York that I dearly wanted to see. It was called "Matisse: His Art and His  Textiles." The exhibit included a large number of the textiles Matisse collected, exhibited alongside the paintings he used them in, such as the fabric inspired 'wallpaper' in the painting above, and the screens in the top painting. Though I did not make it to the exhibit, I purchased the catalog/book. (When I see what it's going for now, I'm glad I got it then!!!) 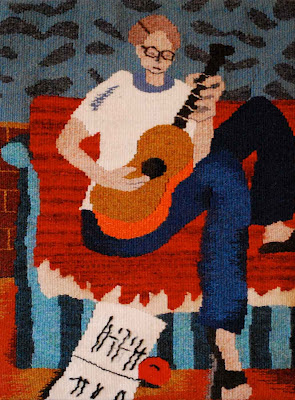 This week, I have been gathering things to take with me when I teach in Long Beach at Convergence next week. In planning the seminar, I have re-lived a lot of work I haven't thought of for years! The small Matisse-inspired tapestry above is one such piece. It is about 12"x16" and is called "Andy's Musique." It was woven in 1997, when my youngest son was taking guitar lessons. We still have the throw and the sofa shown in this tapestry, though my son no longer wears only Berkinstock sandals, and is now the father of half my grandchildren! 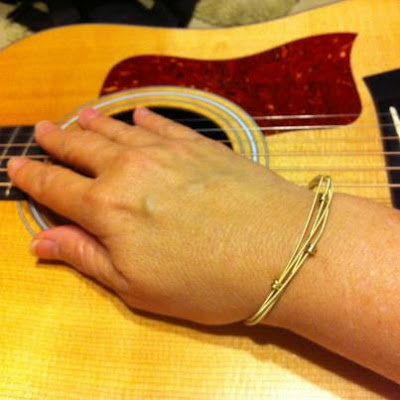 Fabric and music still influence my work and my life, as they did Matisse's throughout his lifetime. In fact, I am now playing the guitar myself. During one of my practice sessions last week, I broke a string, so replaced the entire set, and used the old strings to make myself a bracelet. It is not a great work of art, or even a great piece of jewelry, but will serve as a fun reminder to me of the connections all around me: art, fabric, music, and artists who have created before me; all a part of the tapestry that is my life.

On the bulletin board in my studio, I have had for years a little piece of paper with the following poem on it in childish writing:

It is attributed to 'Keith Minick, age 8.'  Whoever Keith is, I have loved his poem all these many years!
Posted by K Spoering at 4:04 PM 5 comments:

I finally got the "May" tapestry mounted, packed, and shipped off to California. It is to be in the Leader's exhibit at Convergence 2012. As I was mounting it, I wondered why I chose it to send for that exhibit? It is certainly not one of my most 'impressive' tapestries. In fact, it is a very simple, small, quiet piece. It will undoubtedly get 'lost' among a sea of very impressive works by the other conference leaders. But I think that may be why I chose it.... I am teaching a design seminar, and I want to stress to the students that designs need not be 'impressive' or huge in concept or technique, for the design to express what the artist wants to say. This tapestry is about the relatively quiet, simple in-between-seasons month of May. It says what I wanted it to say.
Posted by K Spoering at 10:55 AM 3 comments: