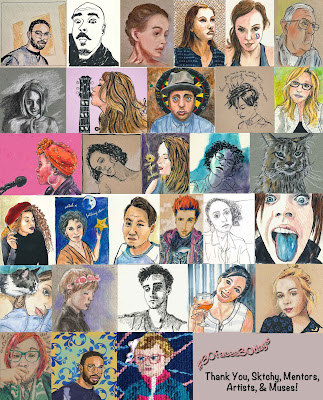 For the month of January, I have participated in a challenge from the Sktchy art app, to sketch 30 faces in 30 days. Each day, participating artists received an email with a tip from a mentor and a photo muse to sketch from (with an option to choose another image.) For the most part, I sketched the chosen images, as did most of the other artists. It was fascinating to see what different people did with the same face to sketch! It also was a challenge for me to see all the different media other sketchers used. I tend to reach for the same watercolors, colored pencils, and ink. But this month, I also used pastels, chalk, brush pens, and digital sketching tools. The last sketch I posted was a tiny tapestry.

It is a good thing for an artist to be challenged to do new things. Creating 'something new' is what making art is really all about, and challenging each other to do that in new ways is truly a growth experience.

Doing this did pretty much use a month of my creative time and energy. Now I need to get myself back to using the skills I have found to do my own work. But, hey, thanks a whole lot, Sktchy!
Posted by K Spoering at 8:07 PM No comments:

Last Saturday was the 2nd Women's March in many places, including my small Colorado city. As with last year, it was estimated that about 2000 would show up, and the number of marchers were closer to 5,000! It was a beautiful day. My friend and I marched together with our husbands last year. Our husbands were unable to march this year, but my friend and I marched together again. As a pacifist, the one important issue to me in any election is intelligent gun control. That issue has become even more urgent to me, and to my friend, as she lost a son to gun violence in the past year.

As with last year, I posted a selfie in my pink knit March hat on Sktchy, and I was again sketched by some of the amazing artists there! In the image above, the first 8 (from the left, to right) sketches are from last year, and the last four were done this year. I normally hate pictures and images of myself, but these represent to me support for my beliefs, and for my determination to stand up to the violence and lack of intelligence in our country currently.

(A bit of a rant here:) I heard a newscaster interview a 'leader' last night after yet another school shooting. The interviewer asked what we can do to stop these events from happening. The 'leader' said, "We just don't know, but we will be looking into it." Why not look at every other country that does NOT have this problem? What DO they have? Intelligent gun control laws. What do they NOT have (besides almost monthly mass shootings?) An NRA that uses money to control the governing 'leaders.'

Posted by K Spoering at 8:57 AM No comments: 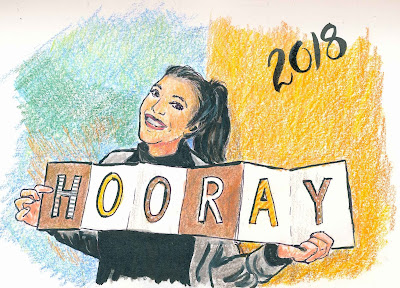 I am hopeful that 2018 will be a better year than 2017 was. How could it be worse? (Maybe I shouldn't ask such a question.)  I am celebrating the passing of the last year, and my one resolution is that I will try my best to stay positive and hopeful in the coming year. Last year encouraged us all to be negative, divisive, unsure, and disgruntled. I want the coming year to be better. We did see some good things come out of last year, and I am going to do my best to concentrate on those.

So, stay strong, folks! Life in this darkened world is bound to get better. Lets all be lights!
Posted by K Spoering at 9:42 AM No comments: