Back in December I went to the "Becoming Van Gogh" exhibit at the Denver Art Museum, and fell in love with this little 8x10 painting.

One of the things I have heard and read a lot, is that you can learn a great deal by copying the art of artists whom you admire. So I decided to copy this little painting yesterday. Above is my life-size copy, 8x10". I learned several things. First, I had decided to paint it on the new Arches Oil paper, since it was just a study, never to be exhibited, etc. I learned that I HATE the oil paper!  The paint soaks into the paper, making it impossible to make corrections, and it also makes the color much more intense when it dries. Because of this, it is also impossible (at least for me) to show brush strokes, which are important in a Van Gogh painting. Live and learn. Maybe when it is dry, I can add a few strokes on top. But I also learned a few things about what Van Gogh was seeing as he painted this subject, and about why and where he put the shadows and glass reflections.

I do not think my copy is anywhere near as wonderful as the original, but I still have decided to frame it and hang it somewhere in the studio, as a reminder of the lovely original, and of the fun experience I had of 'painting with Van Gogh.' 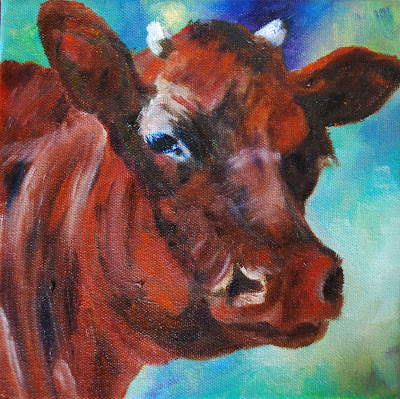 In addition to painting the Van Gogh copy, I had been asked to do a portrait of a friend's cow. I had started it some time ago, and decided to finish it up, while my paints were out. It is about 9"square, and is on artist wrapped canvas, so the sides are also painted, so it won't need to be framed. That made it pretty hard to get a good photo, as the paint is still wet, not just on the front, but all round! I already do see a few 'fixes' I need to make when the paint is dry, but nothing major. 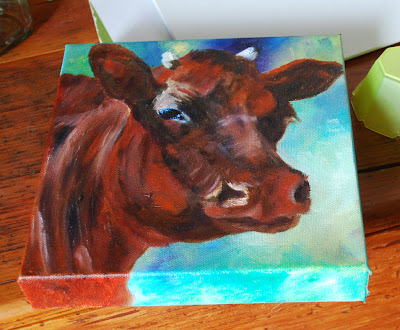 It was great to spend a couple of hours at the easel! I have been painting at the local art center from models on Wednesday mornings, but this week the center was closed, due to the explosion of two houses right across the street, and the attempts of the gas company to find and repair the leak that caused it. The center was still closed yesterday, but it should be up and running as usual by this coming Wednesday.  (Three people and a dog were injured in the explosion, but, miraculously, not badly, as they were thrown through the roof of the house, and the houses were quickly reduced to rubble.)
Posted by K Spoering at 12:34 PM 1 comment: 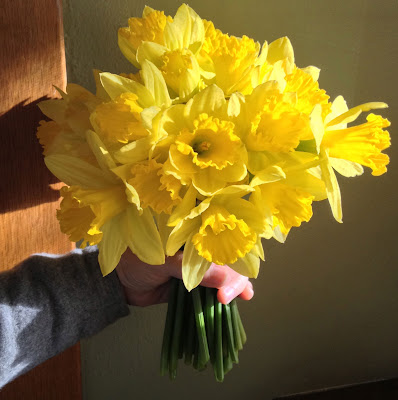 At the grocery store the other day, they offered four bunches of daffodil buds for $5.00. Who could resist that, after a long cold winter?  Though none were open yet, I had faith that they would open for me, and would fill my house with sunshine! And they have done just that. 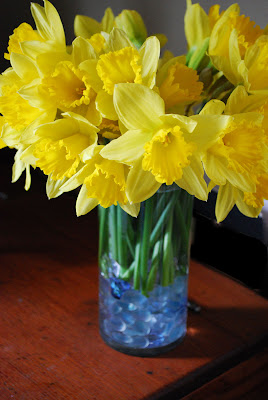 There were from 10-12 flowers in each bunch, so I came home with about 40 or more flowers. I gave one bunch to the neighbors, so there are still about 30 in my bunch. I want to paint them, in spite of the fact that my watercolor teacher once said not to ever try to paint yellow flowers. Looking at all this brightness, I can see why she said that; how can one capture this sunshine in paint? 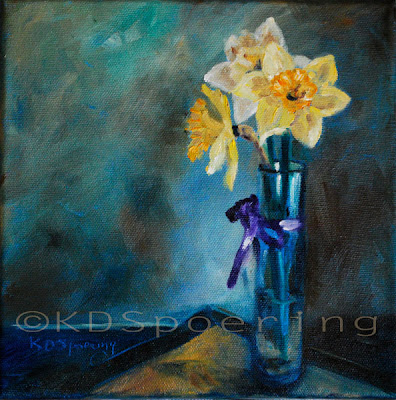 I did paint daffodils once before , in a small oil painting. I remember that it was a challenge to capture the yellow. But I am silly enough to want to try it again. In celebration of spring, I have added a print of the daffodil painting above to my Etsy shop. 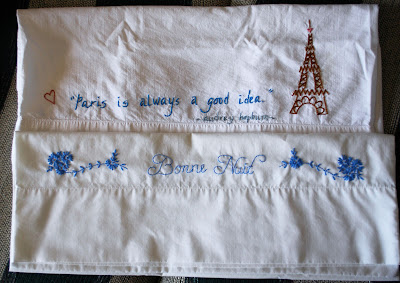 I have been taking advantage lately of the pleasures of hand-made comfort. I have been wearing handknit socks and sweaters. I have been baking bread. I have felt the need of 'comfort' as the winter was cold and long, and I have lately had a dreaded head cold, followed by an eye infection.

One of the things that I am comforted by lately are hand embroidered pillow cases. When I got married, almost 40 years ago, a small and very old lady in our church gave me some pillowcases that she had decorated with some crochet. They were not beautifully done, but I have always treasured them because of the work she did on them for me. Later, I got some beautifully embroidered cases that my mother-in-law did, and then I purchased some at a charity fund-raiser at church. On one of my visits to my parents last year, my Mom gave me a pillowcase made by her mother, my grandmother. All of these have always delighted me. I would take them out of the back of the linen closet and think fondly of those who had made them. Then I would put them back.

But when I got back from Paris last spring, I found several very old softened-by-time white pillow cases at our cabin. We've had the cabin for 30 years, and these were some that 'came with' the cabin. One is even patched on the  back. I decided I wanted to use these soft cotton cases, maybe even use them completely up! But I wanted them to be a delight to use; a comfort. So I stitched on them. 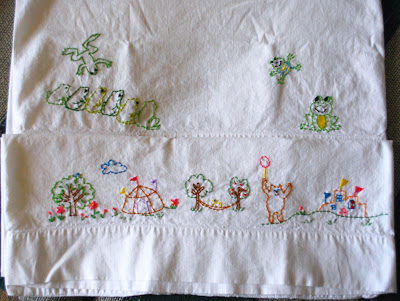 Soon thereafter, my grandchildren were coming to visit, and I wanted each of them to sleep on a 'fun' pillow case. I had two cute bear cases; the ones I had purchased at the church auction. So I needed two more. I stitched the ones above. I don't even know if the kids noticed the cases, but I know they were resting their sweet heads on hand-stitched love. 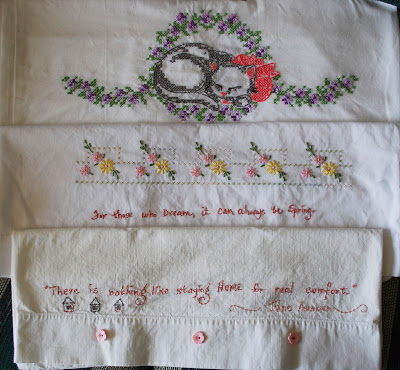 Then I found a partially-stitched case my niece and I had started to work on years ago when she was young. I finished it up (the cat one.) Now, whenever I find an unstitched case in the linen closet, I pull it out, whip out my trusty marker (that washes out in the laundry) and I start drawing and stitching. I do not try to be fancy or even artistic. I am loving whimsy on these, and I want them to look hand-drawn and stitched.

I sleep on all of these. I do not iron them; you may have noticed that. If I have to fuss and iron, they will not get used. And I think they are softer un-ironed, and they are all about comfort to me.

When you are in need of comfort, think of actually using something that came from the work of your hands, or the work of some other woman's loving hands. I can not tell you of the comfort it gives me every night now, to rest my often-weary head on labors of love.
Posted by K Spoering at 11:52 AM 3 comments: 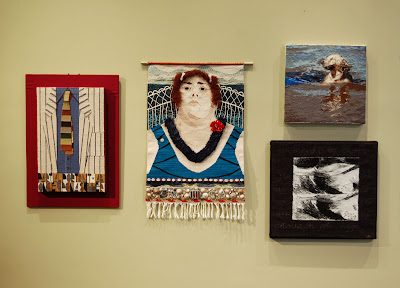 I received this image of my 'August' tapestry in the ATB9 exhibit from the gallery in Fort Wayne, IN. It is in very good company: Archie Brennan's piece is on the far left, with one of Joanne Sanburg's marvelous women in the middle, and Janet Austin's lovely piece below mine. Janet and I 'hung together' in the ATB8 exhibit, as well. We must make compatible works, or maybe the sizes of our current tapestries just make them easy to hang 'stacked' like this.

It was very nice of the gallery to send me the photo of my tapestry hanging, as they are shipping the works to come back home. I confess that I am somewhat amused by it though. It is as if they want to prove that they actually did hang the work, after the horror that some of you may remember of discovering that these pieces, and a number of others, had not been hung at the beginning of the exhibit. It all worked out in the end, though, as it usually does. One of my favorite quotes is from the movie, The Best Exotic Marigold Hotel, when the young hotel owner keeps saying, “Everything will be okay in the end. If it's not okay, it's not the end.” (The quote is also attributed to John Lennon.) Anyway, this exhibit is proof that it is true; by the end, everything was okay.
Posted by K Spoering at 2:09 PM 4 comments: