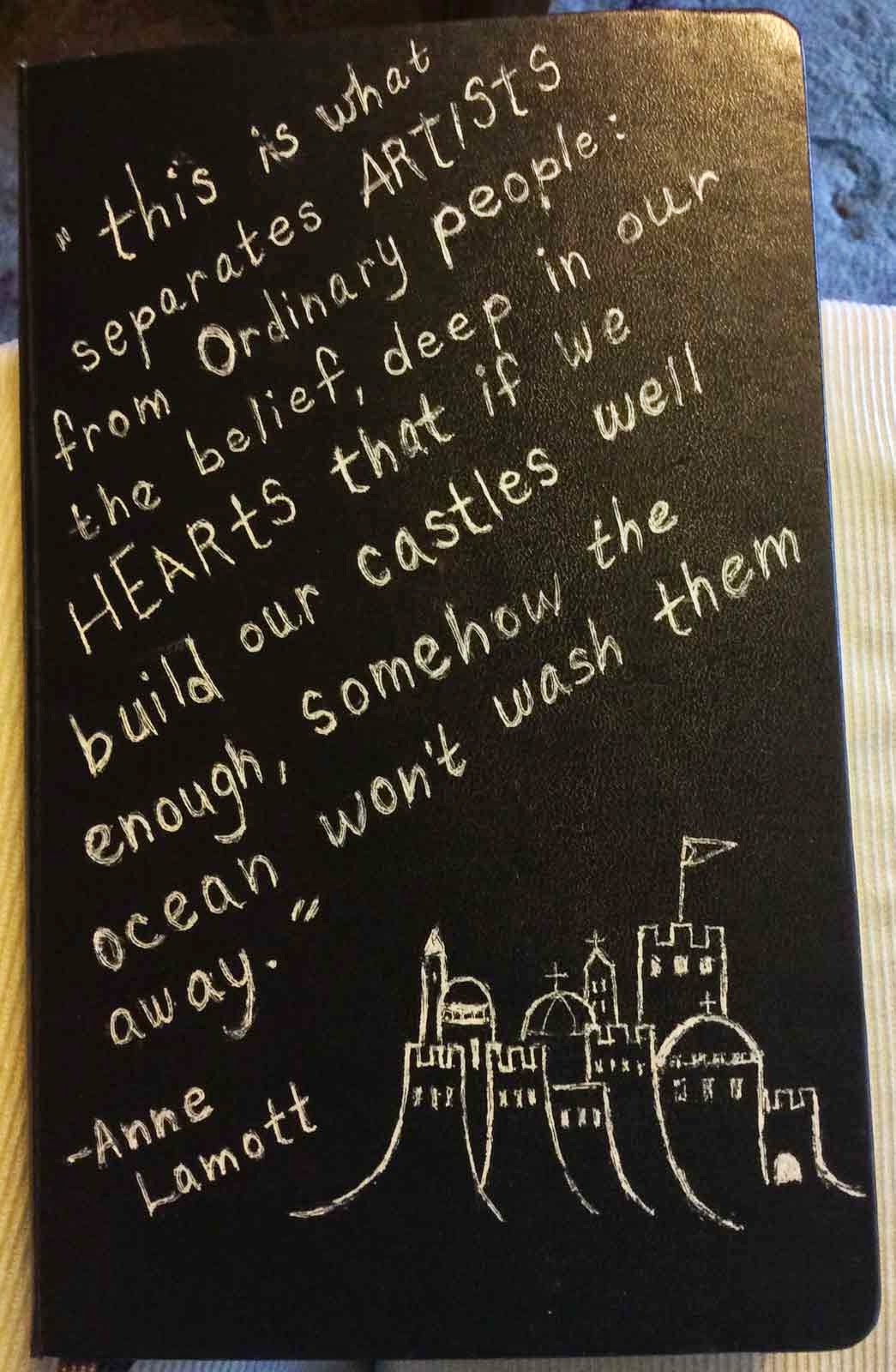 I have been keeping a sketchbook for the past several years, and I did the last page in this year's book today. I have used Moleskine's 5x8 sketchbook for the past 3 years, and I have loved it, but have discovered that it has changed. It is now being manufactured in China instead of in Italy, and, though the price has not been lowered any and has in fact been raised, the paper is not the thick creamy paper of the past Moleskines. I went ahead and purchased one for 2015, but if I do not like it, I will get something else. I hate it when things I love change for the worse! 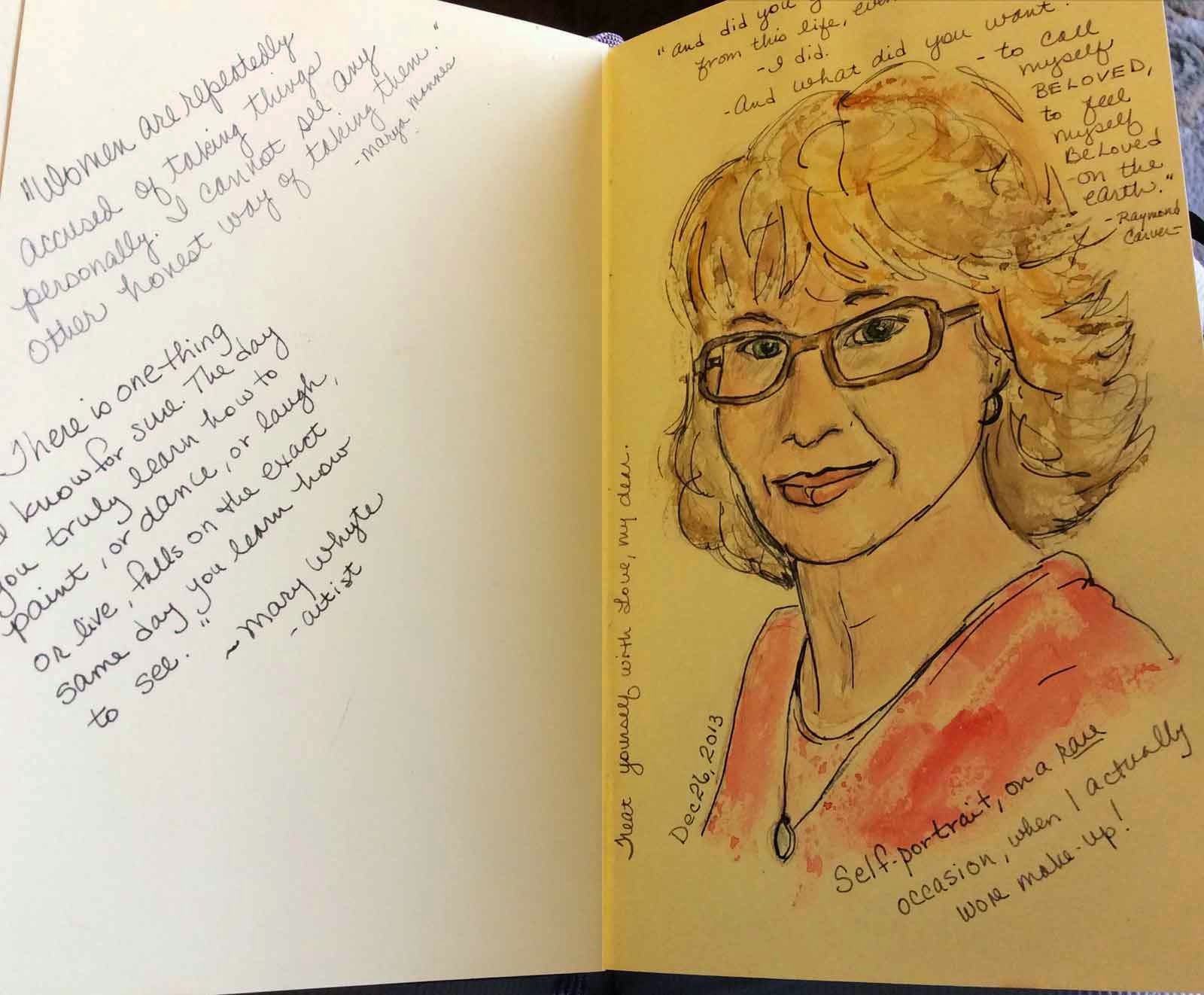 I have shared pages from this year's sketchbook several times throughout the year, but here are a few more. The more personal ones, I'm not sharing. I do not have a 'personal style' I guess. I just sketch what I am wanting to sketch at the time; usually something to do with my life and what is going on. 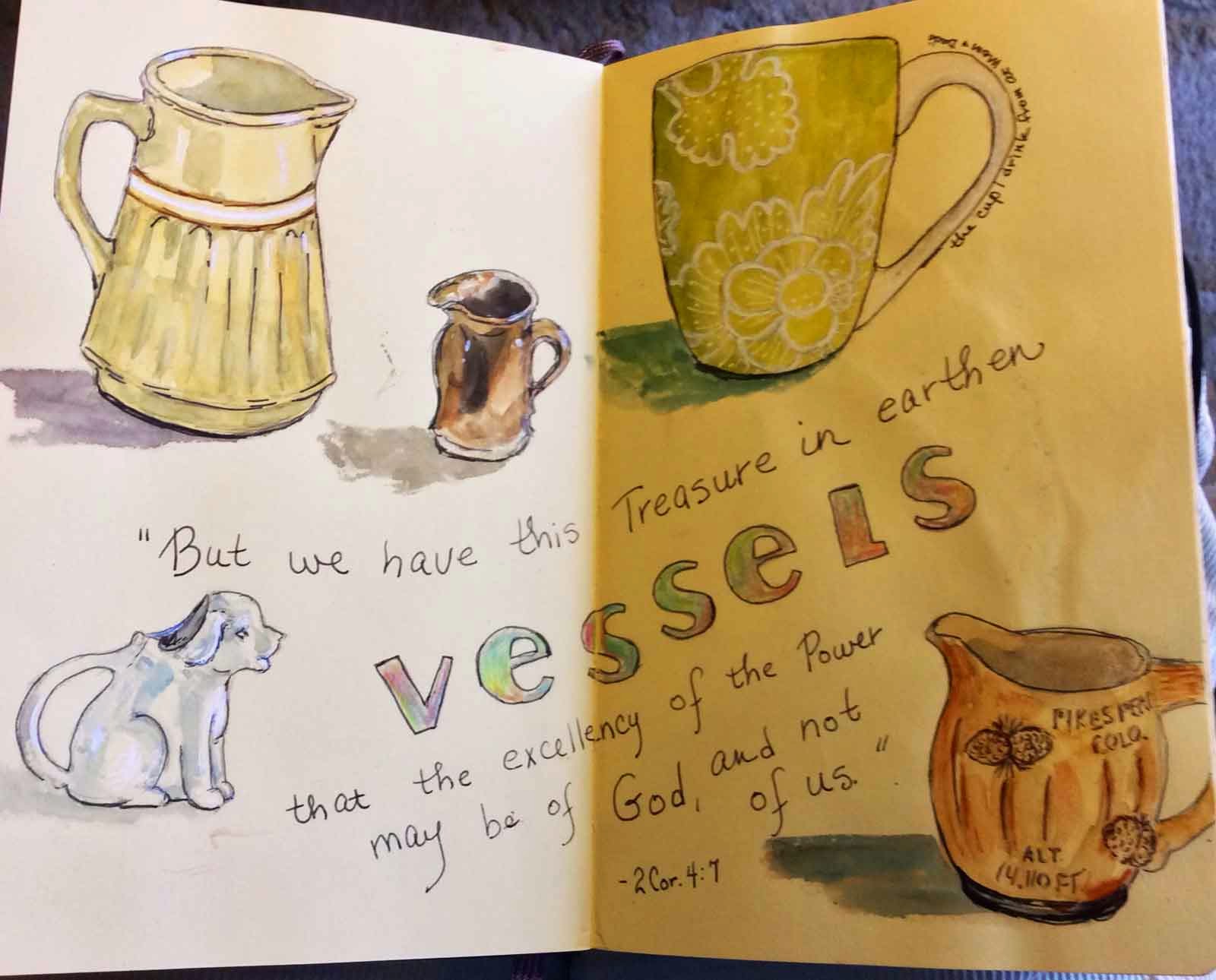 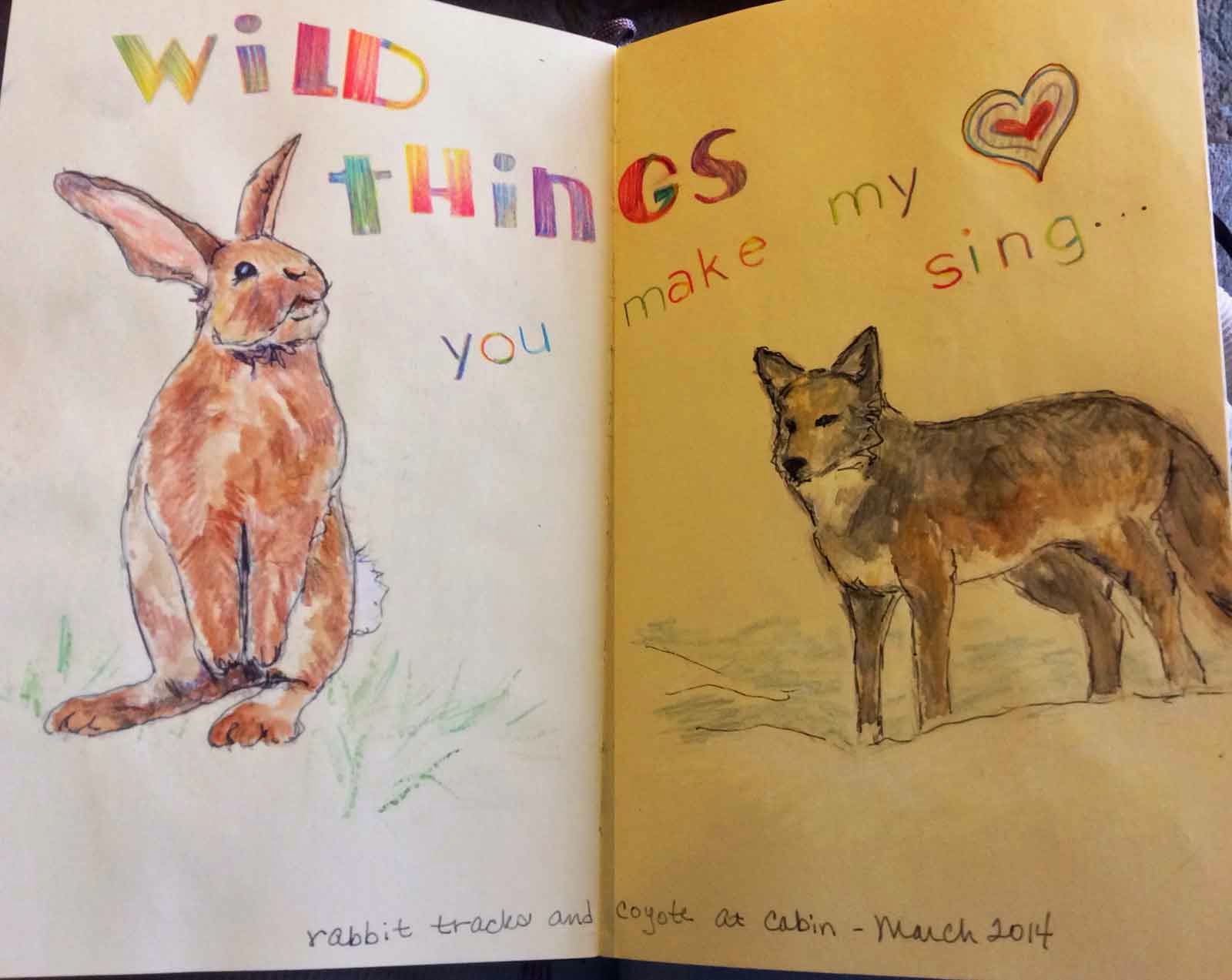 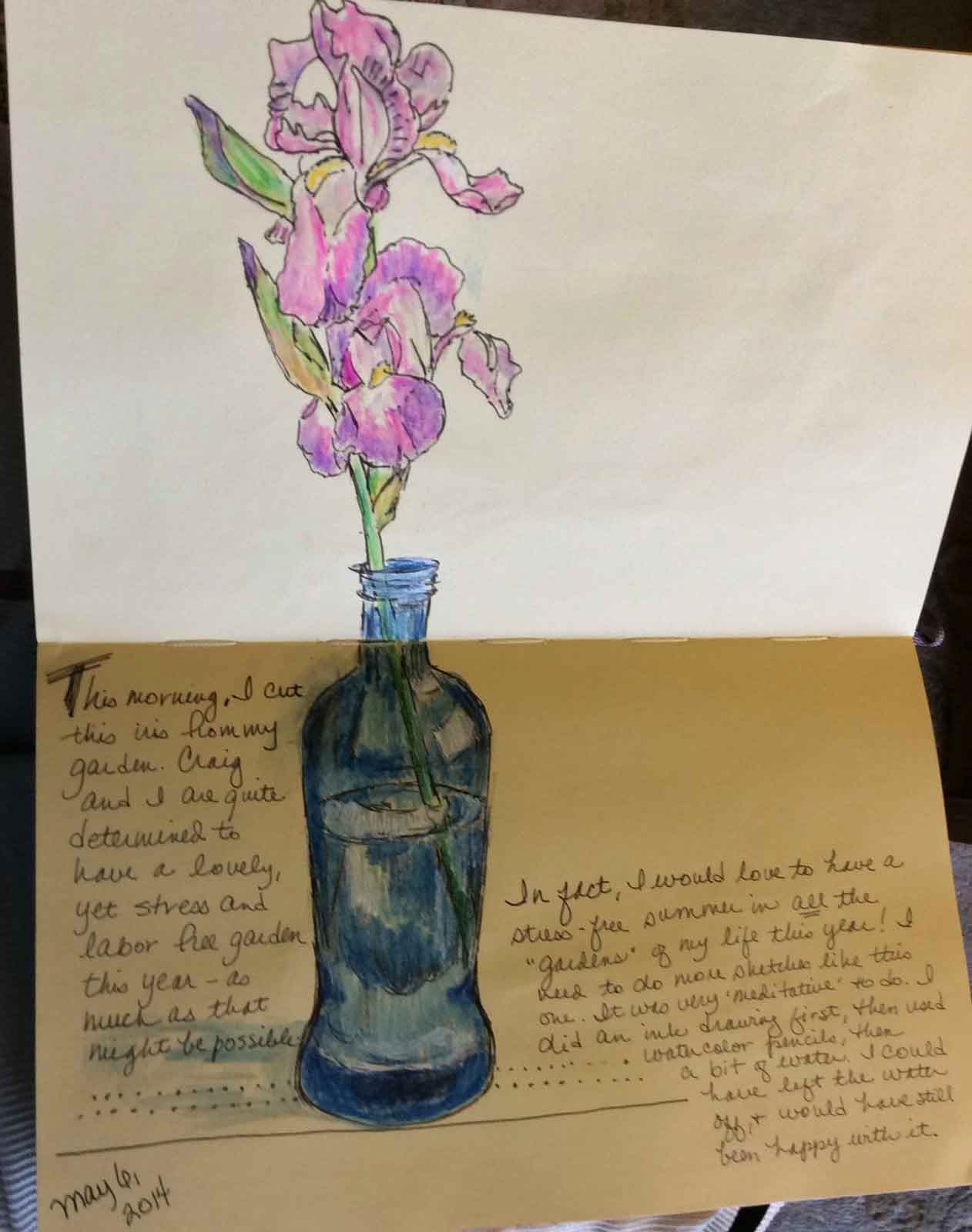 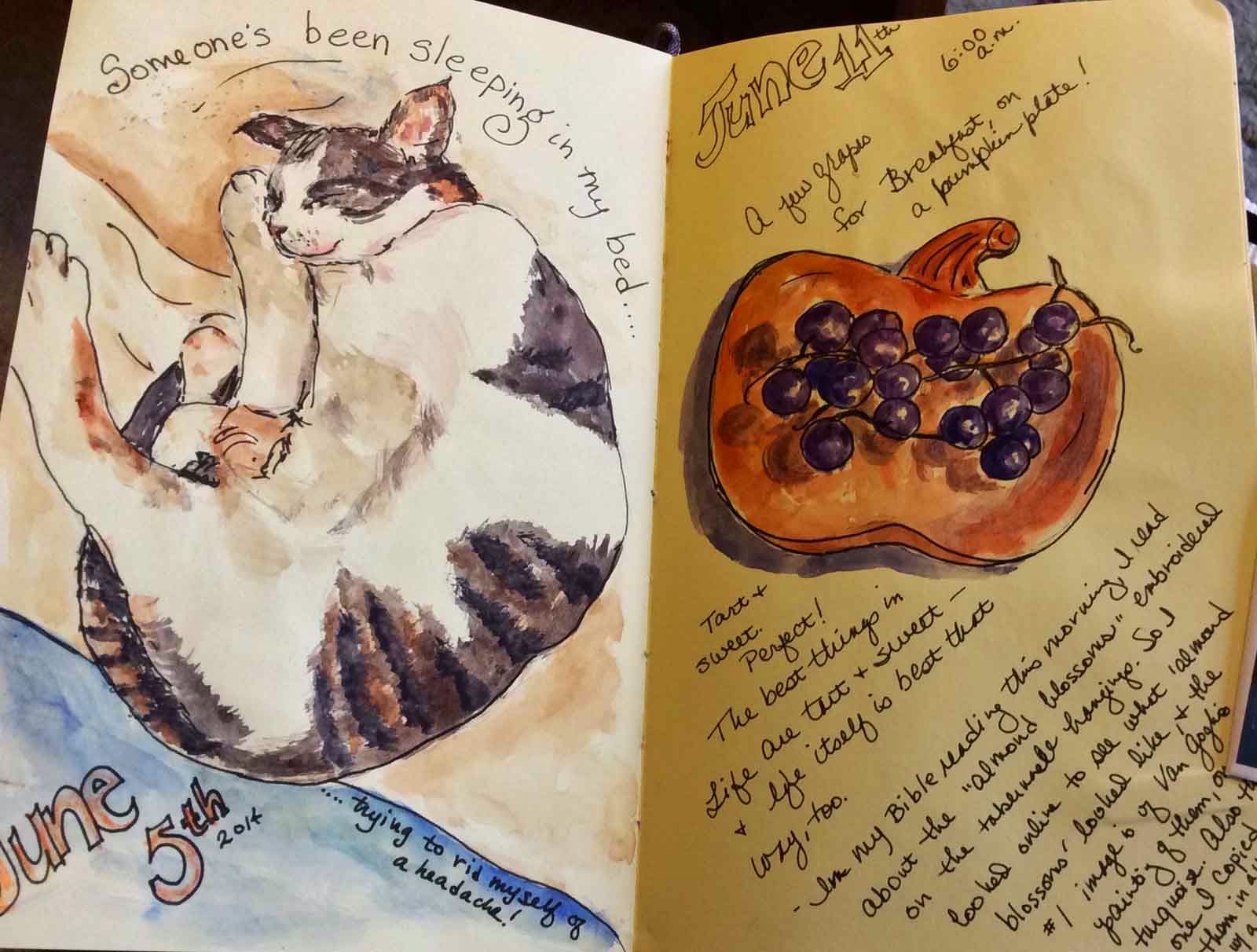 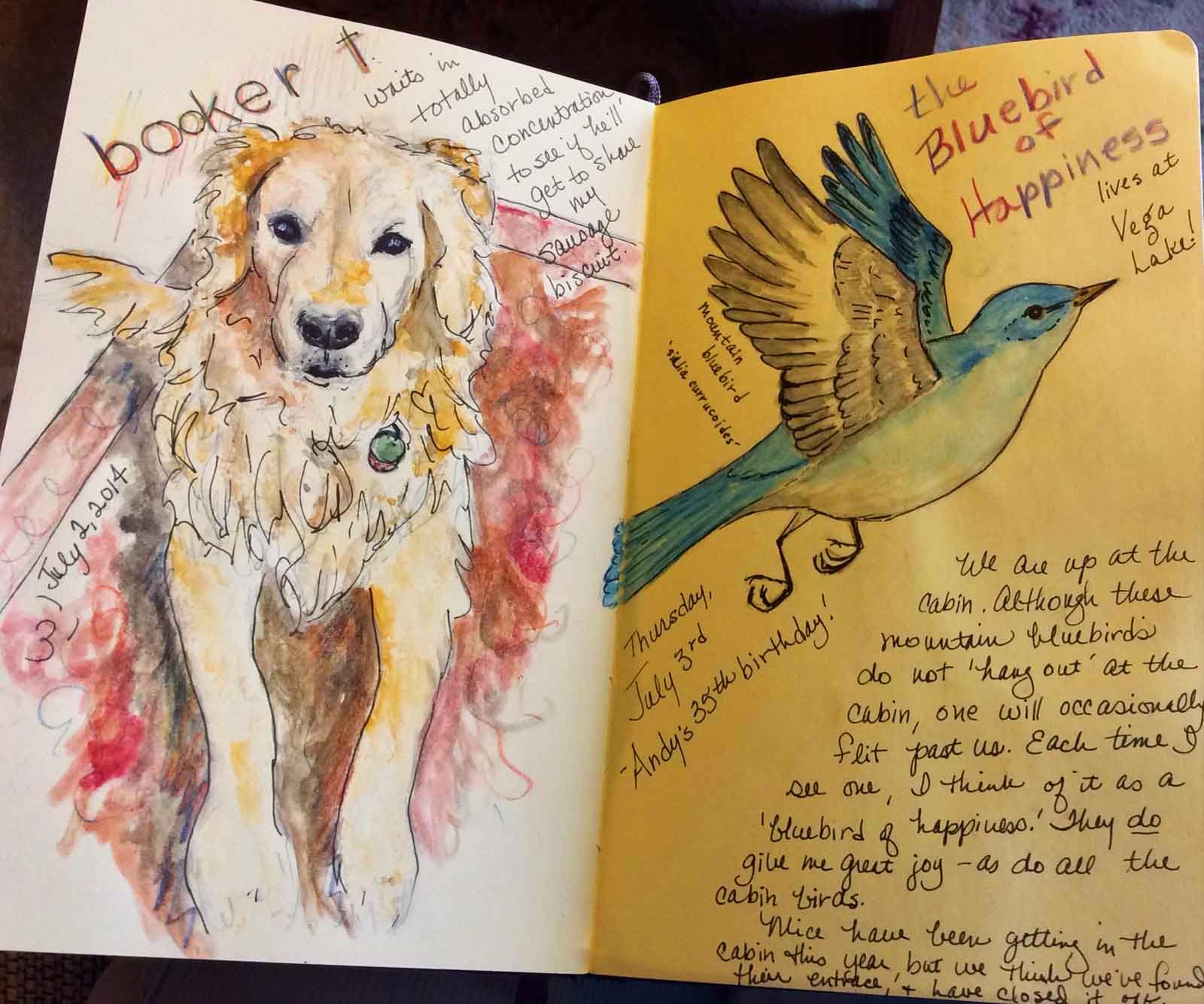 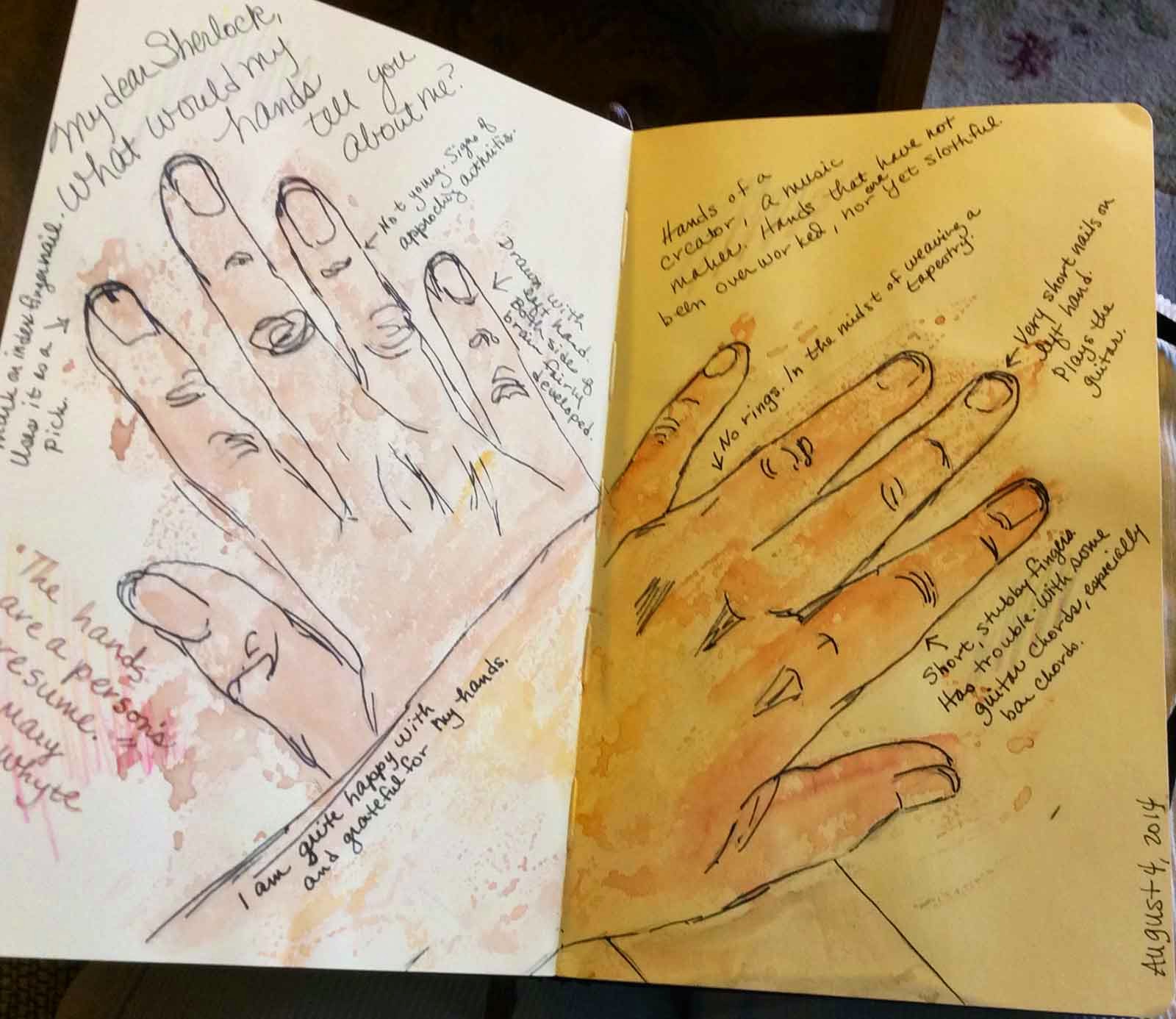 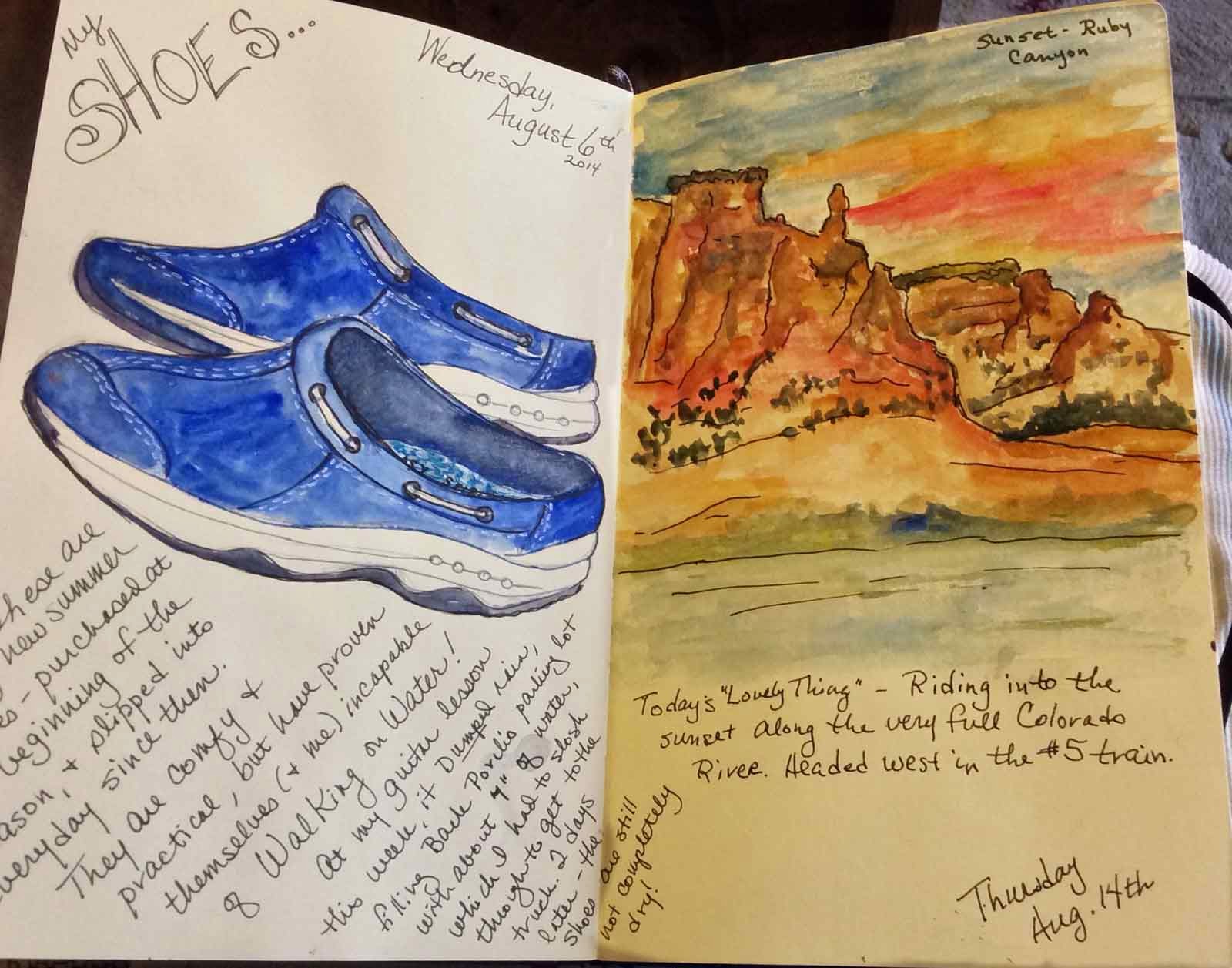 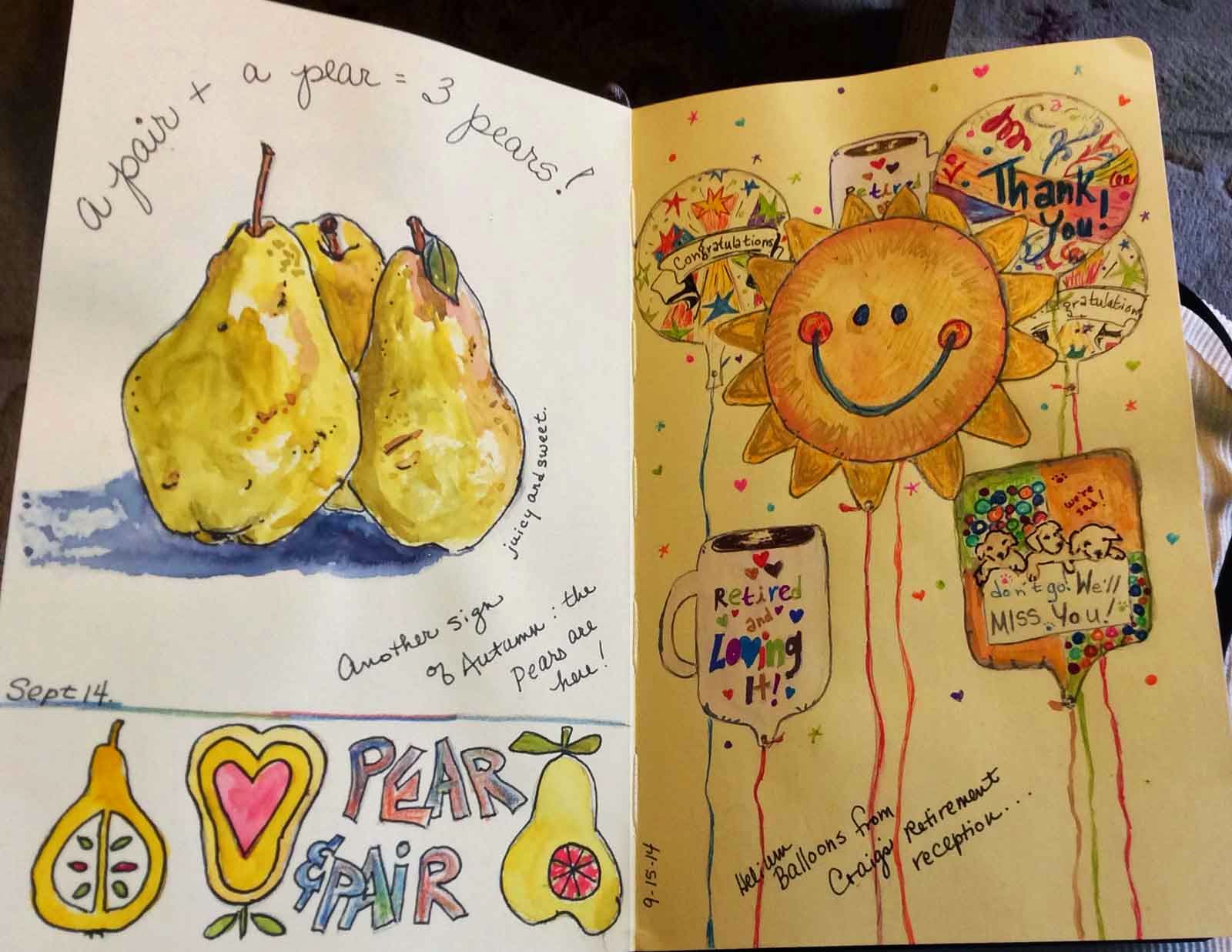 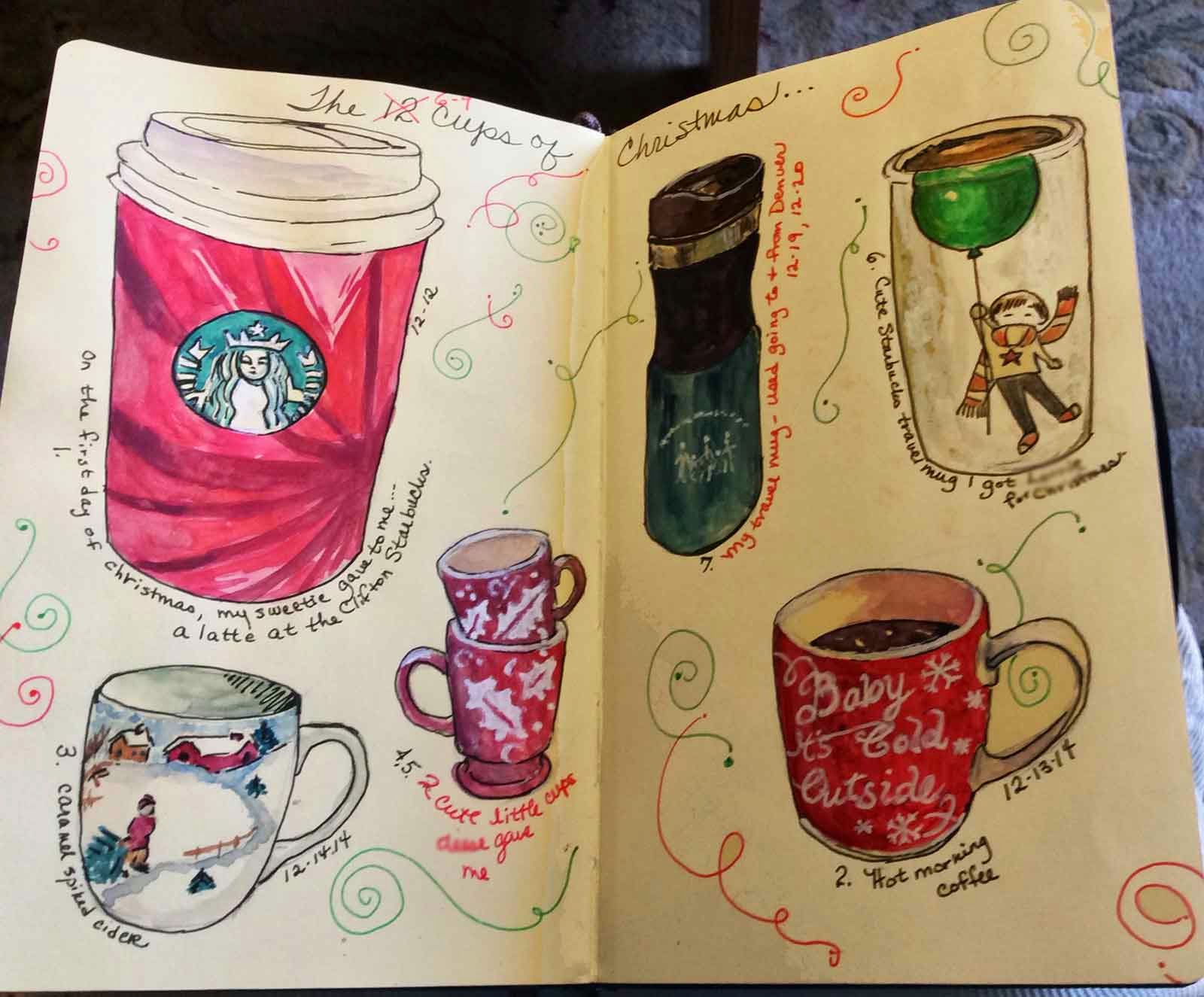 I have begun and ended each of the past few sketchbooks with a self-sketch, so here is the one I did today. I am somewhat tired, and am not 'fixed up' in any way, but, as this is how I often look, I guess it is appropriate. Sadly, I do think I look at least a year older than I did in the sketch in the front of the book. That's the way it goes! 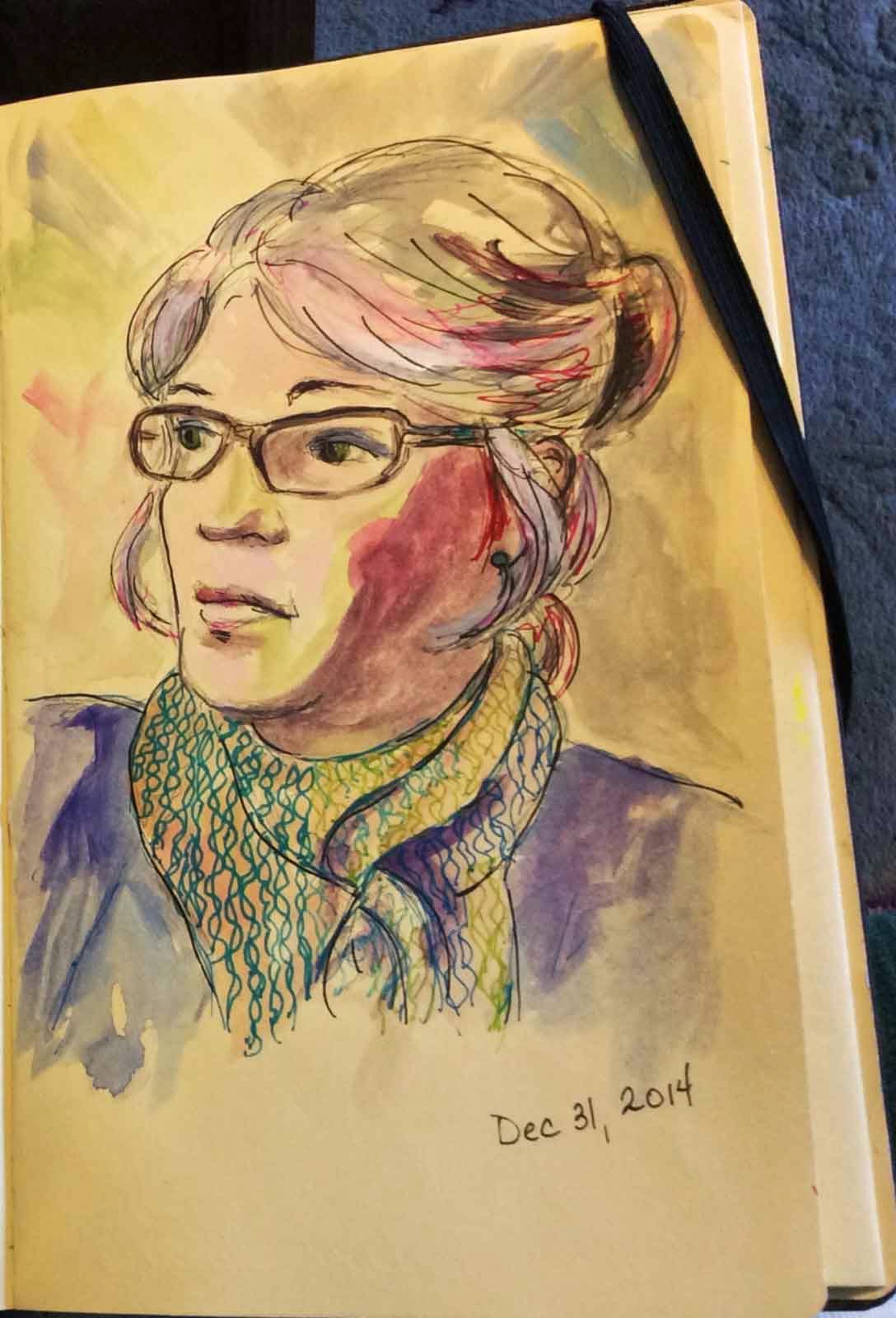 Tonight, I will shelve this sketchbook with the ones from the past few years. Tomorrow, I will start the new sketchbook, as I start a new year. 2015! I hope it is a good year for us all. As Tiny Tim would say, 'May God bless us, every one!'
Posted by K Spoering at 5:43 PM 1 comment: 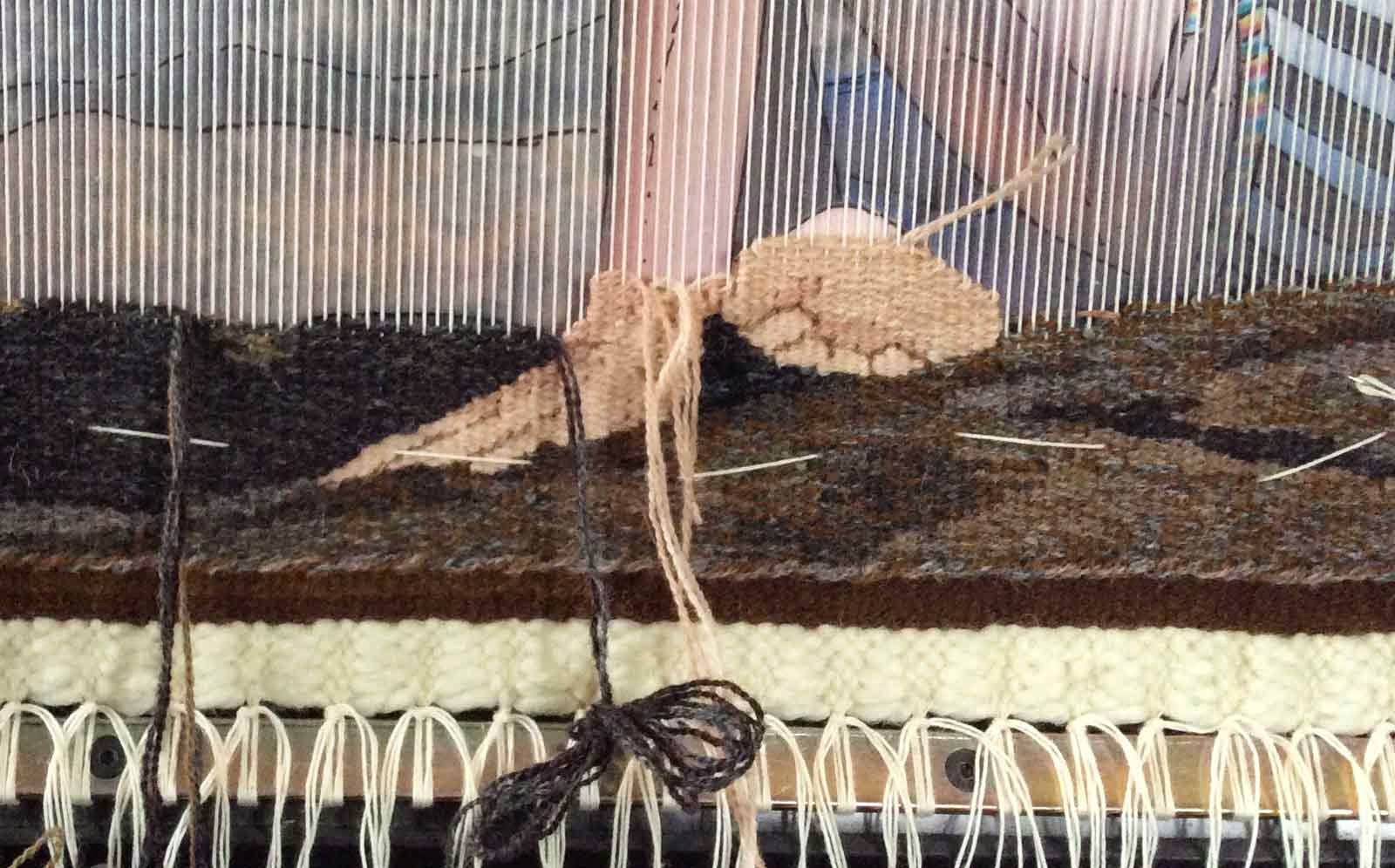 I did get a bit of weaving in yesterday, for Studio Tuesday. The holiday season and it's demands has slowed me down a bit, but I now have 3 inches done on the "July" tapestry. I know, that doesn't sound like much at all, but it is 1/6 th of the tapestry! (That sounds like more to me.)

Sand and rocks and a hand and most of a foot. That's what I've done so far. And I will keep going until it is a tapestry!
Posted by K Spoering at 9:58 AM No comments:

Whatever happened to Studio Tuesday? 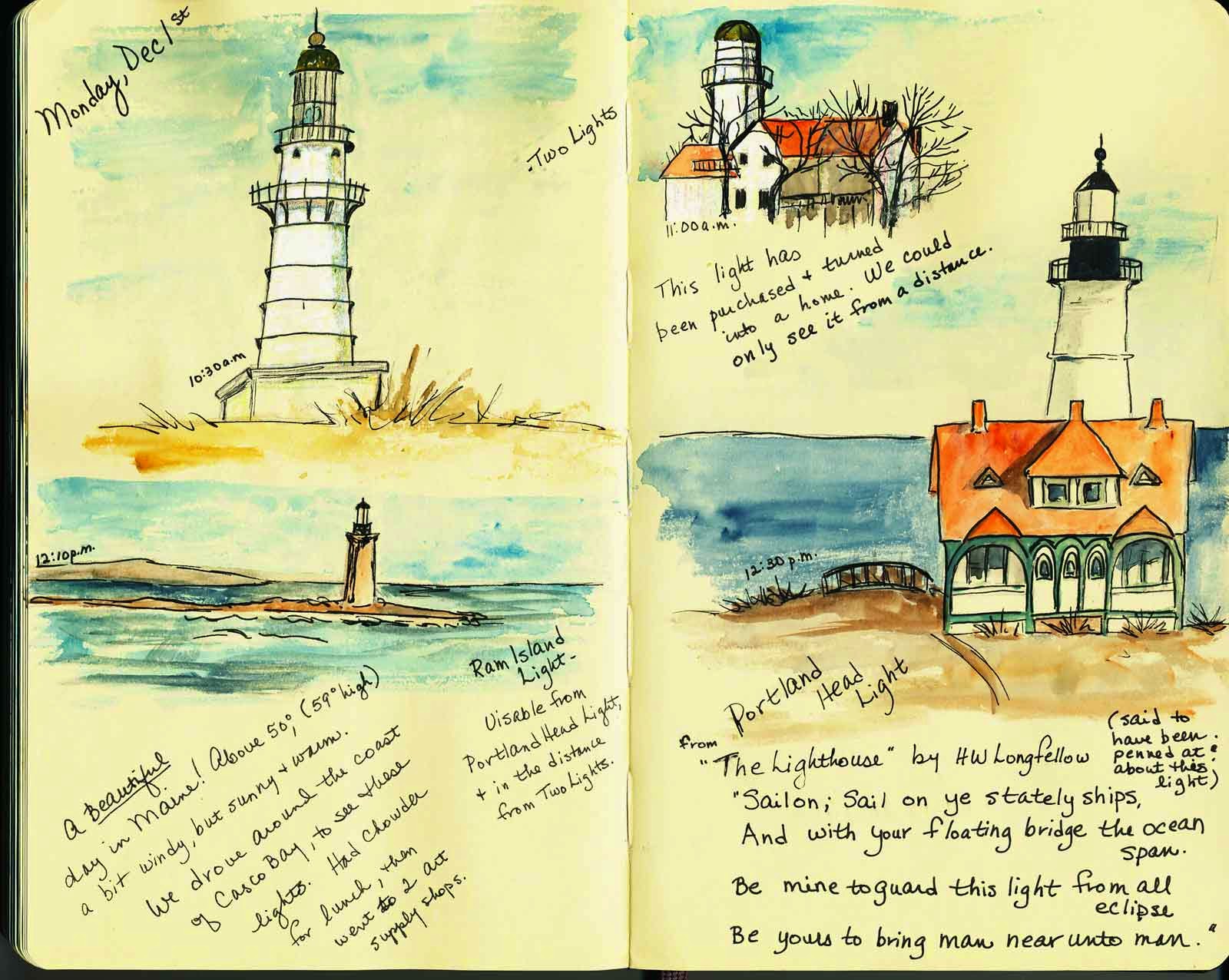 I did actually spend several hours in the studio yesterday afternoon, though not enough was added to the tapestry on the loom to share with you. But I missed the two Tuesdays before, as we were away from home. The closest I got to 'studio time' was the few minutes I spent sketching each of the four lighthouses we saw on our trip! 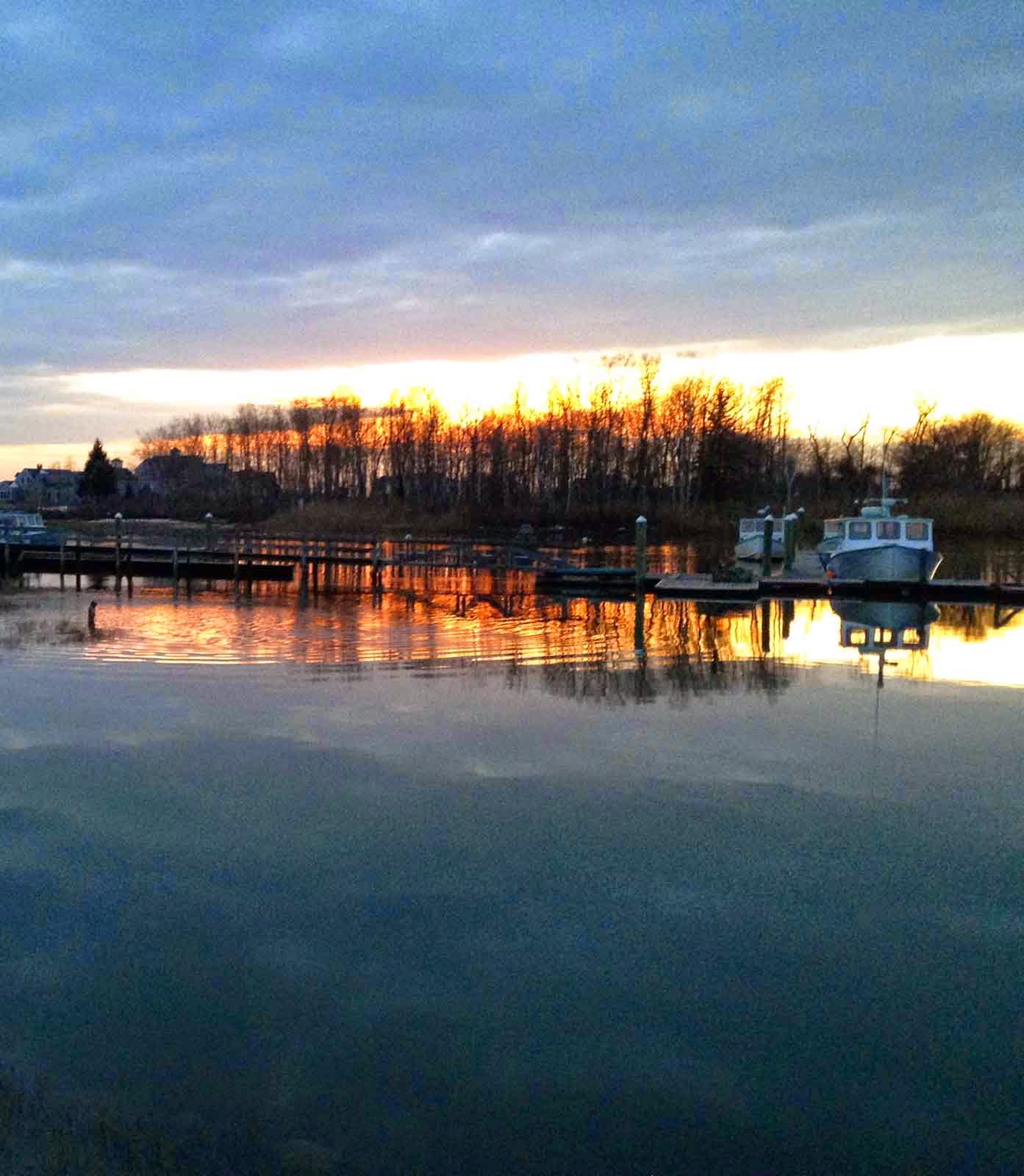 We went to our son's home in the Boston area for Thanksgiving, and spent almost two weeks enjoying our son, his wife and a couple of exceptional grandkids. We went with them to the Peabody Essex Museum in Salem to see a spectacular Calder exhibit. Then we took a couple of days and went to southern Maine, while they were all working or back in school.

We got up to the Kennebunkport area just in time to watch the sun going down on the ocean. It was beautiful and we had the area pretty much to ourselves. (If you look closely in the photo below, the building structures in the distance belong to the HW Bush compound.) We had hoped to see all the coastal homes lit up for the holiday, but we were a week too early. It didn't matter; the ocean is always beautiful! 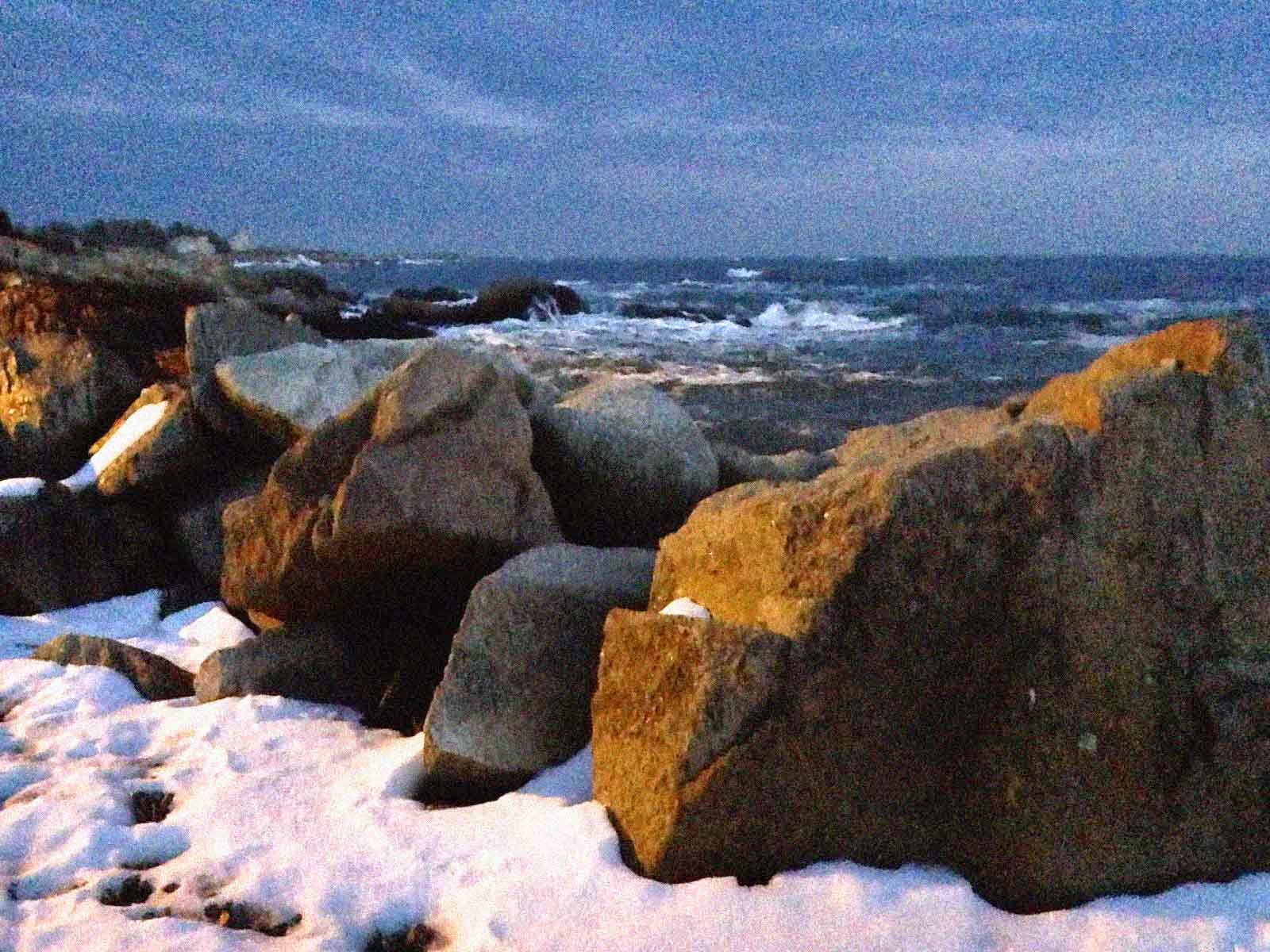 We decided to go on a lighthouse hunt the next morning, to see more of the ocean. We don't have much ocean in Colorado! We saw four lights before we quit for the day. In the photo below, look for my white arrow on the left, pointing to an artist painting on the windy beach. I must say I was somewhat overcome with envy! 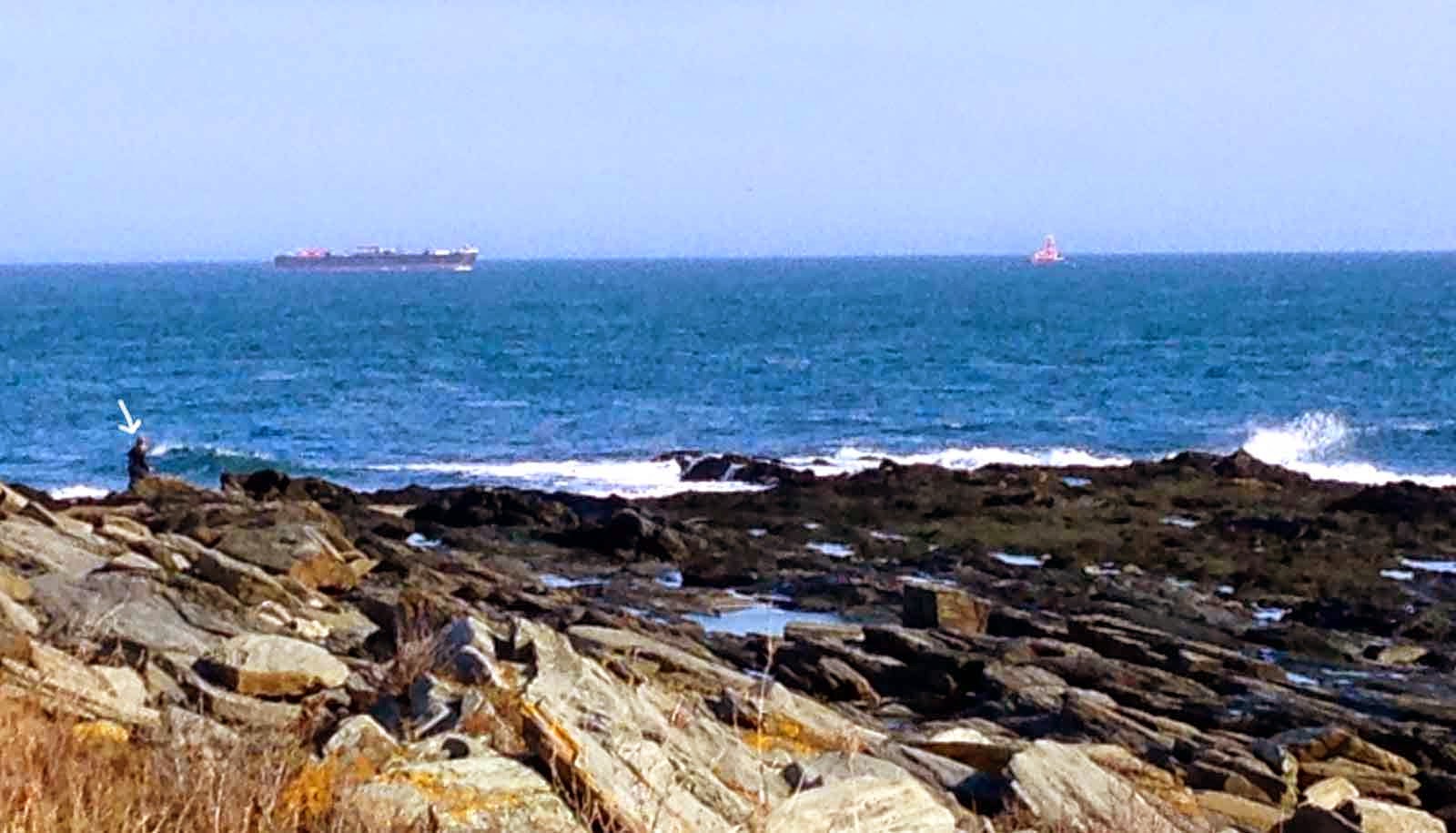 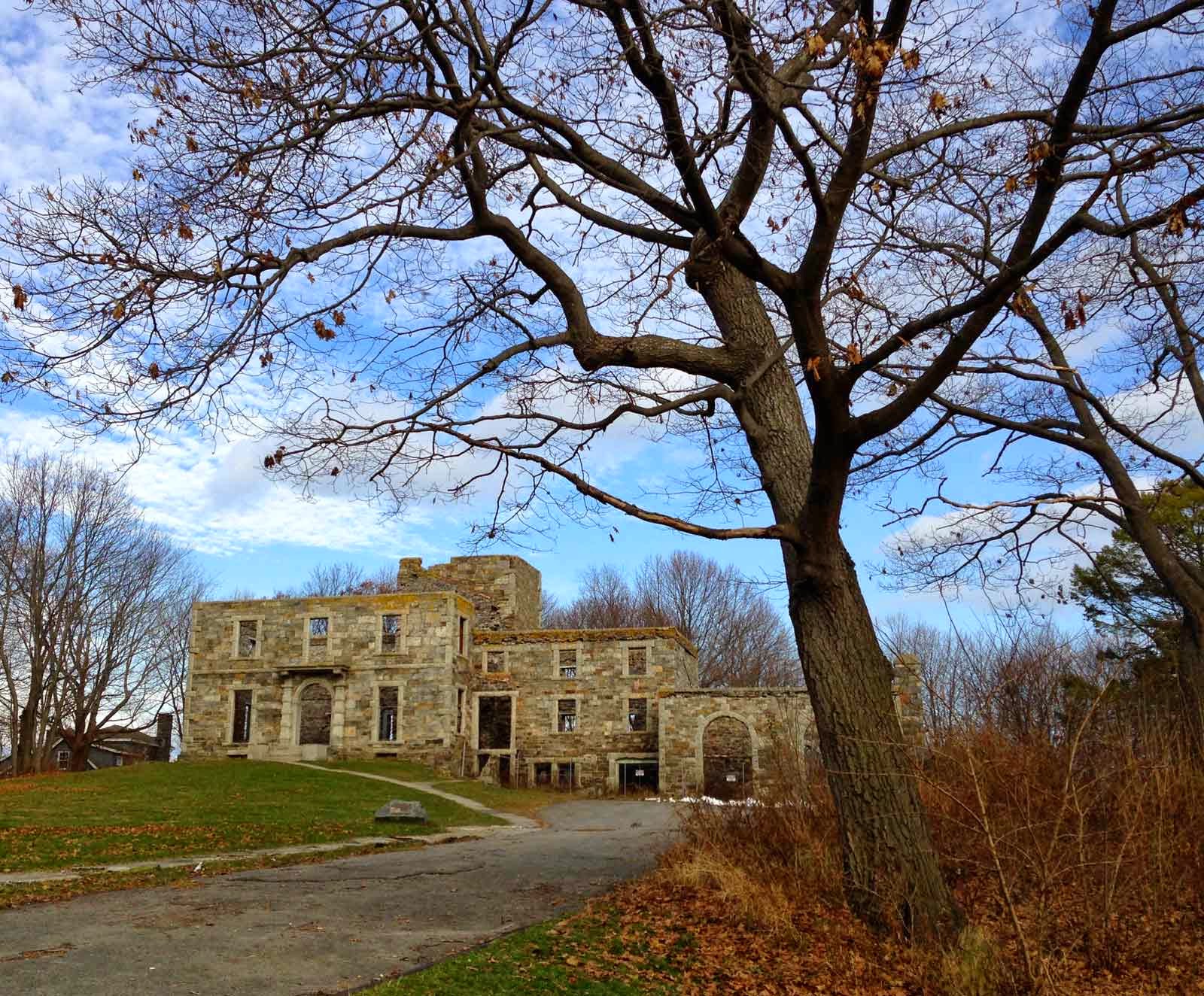 Near the Portland Head Light, we came across this ruin, which we decided was definitely a 'haunted house,' especially after I turned from taking the picture above to see the view I took in the one below! 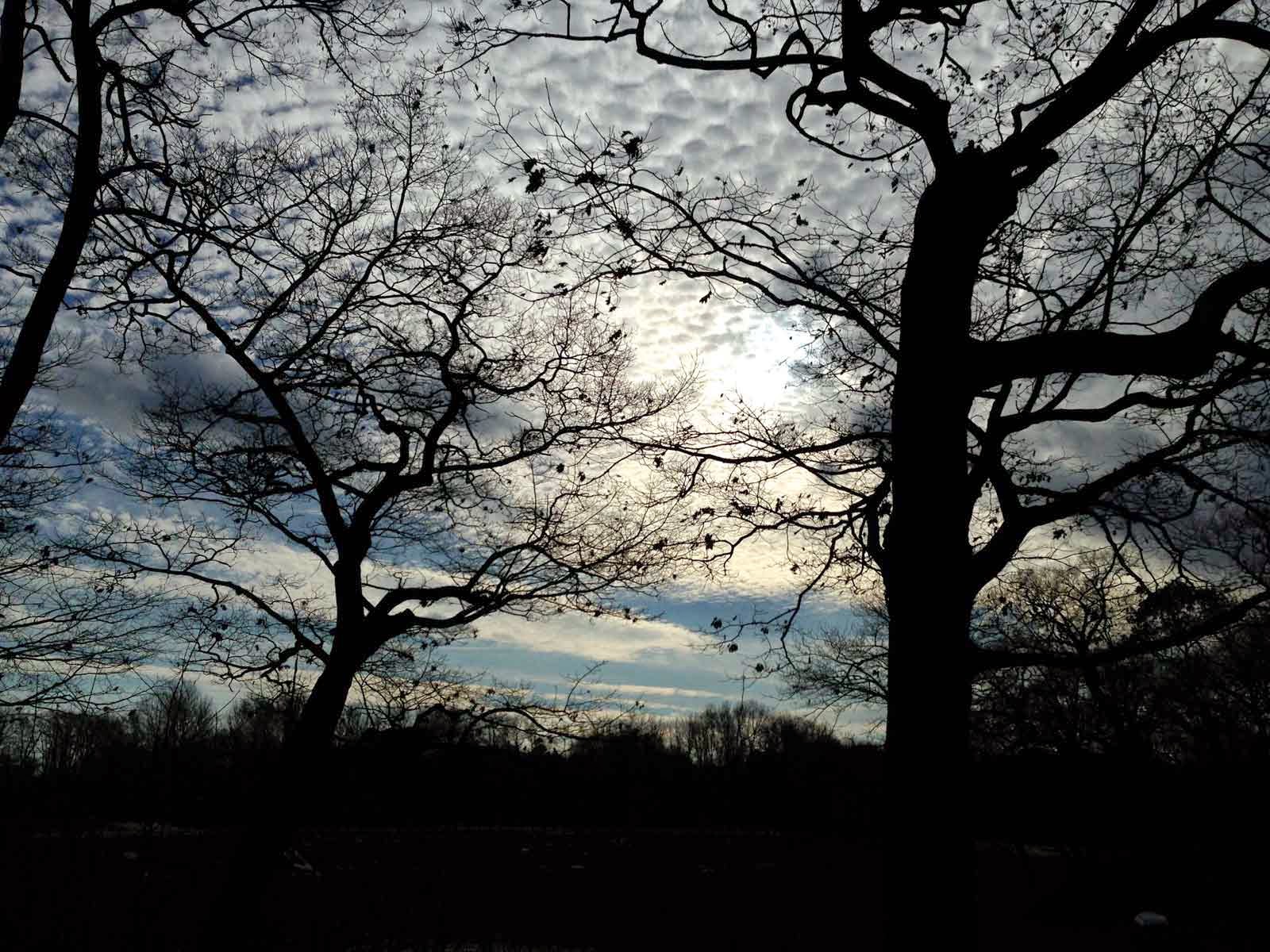 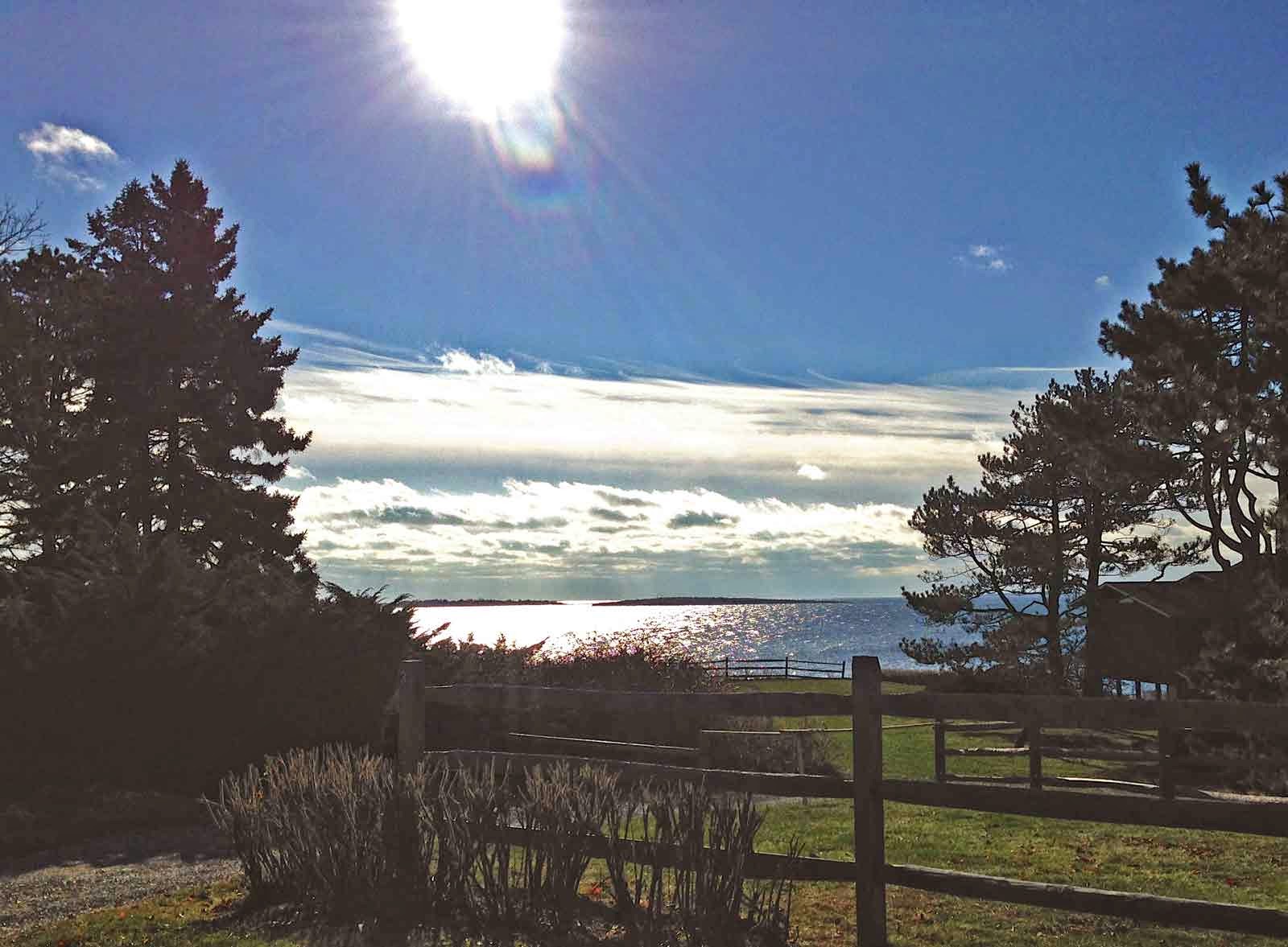 As we were leaving Maine, we drove down to Prout's Neck. I knew the new Winslow Homer Studio/Home Museum was not open (it is seasonal,) but I want to take a peek at where Homer painted from anyway. We got to the drive that leads to his home/studio, but it is a private residential area, and was closed off. I did see the top of his studio through the trees, and took this shot of the cove he overlooked and so often painted. I will go back 'in season' to tour the studio. Something to look forward to.... 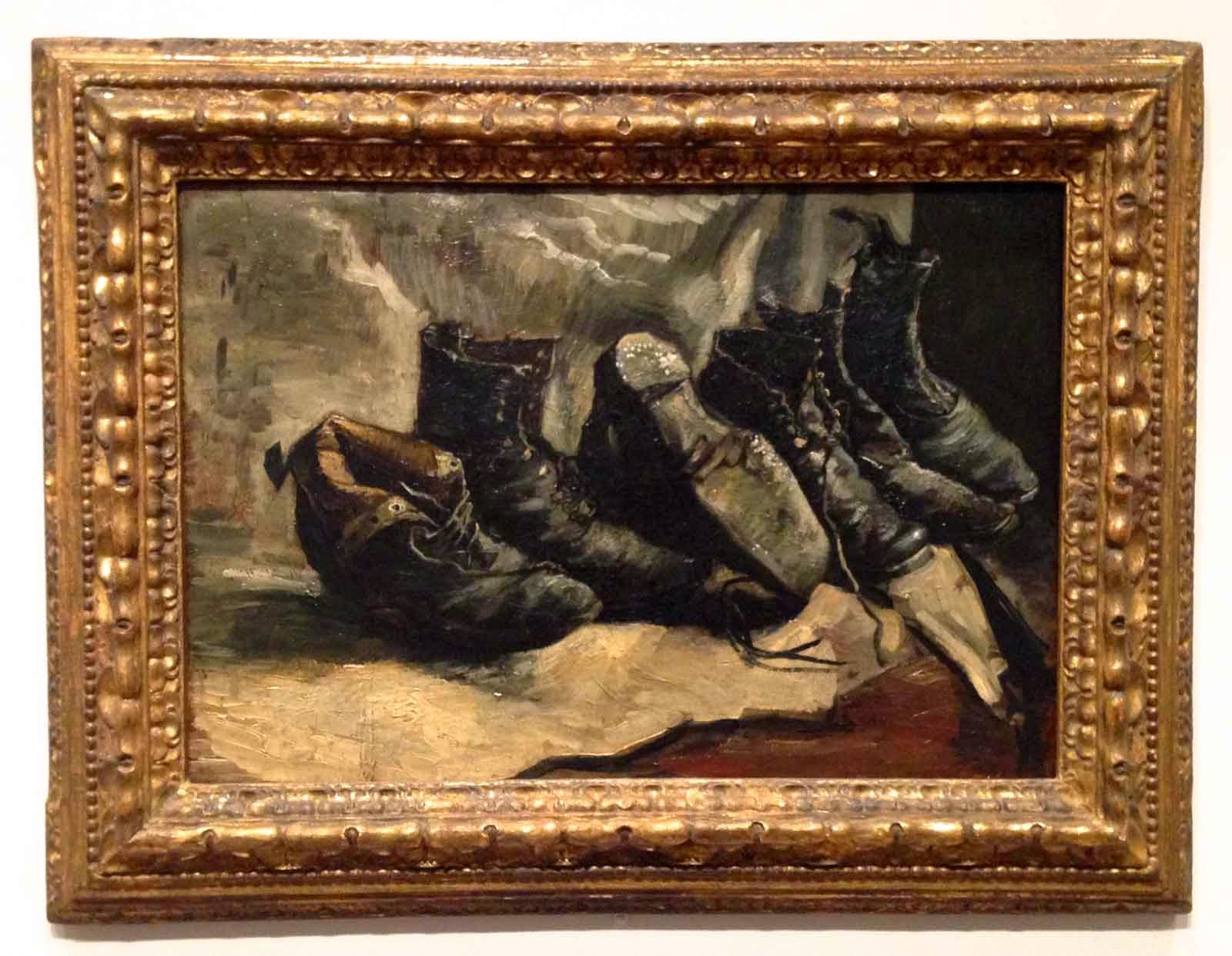 Back in Boston, we went to the finally reopened Fogg Museum, at Harvard. I was a bit reluctant to go, as I have always loved the Fogg, and sometimes am very disappointed at what 'rennovations' do. But I can honestly say I still love it, and maybe even more, as it is larger, so more of their amazing collection is on display. I was happy to see one of my favorite Van Gogh shoe paintings, and, for the first time that I've seen, several tapestries were prominently displayed! If you are ever in the Boston area, don't miss the Fogg Museum, on Harvard's campus. They have some of my favorite pieces of art, from Renoir to O'Keefe to the stunning pre-Raphaelite Arts and Crafts artists I so love. In addition, they have on display a special exhibit of the Rothko Murals that had been created for Harvard, but that had faded so badly they have been in storage for years. They have not been restored, but have been 'recreated' to their original brightness with projection. It is really a creative solution, and there is more about it here. 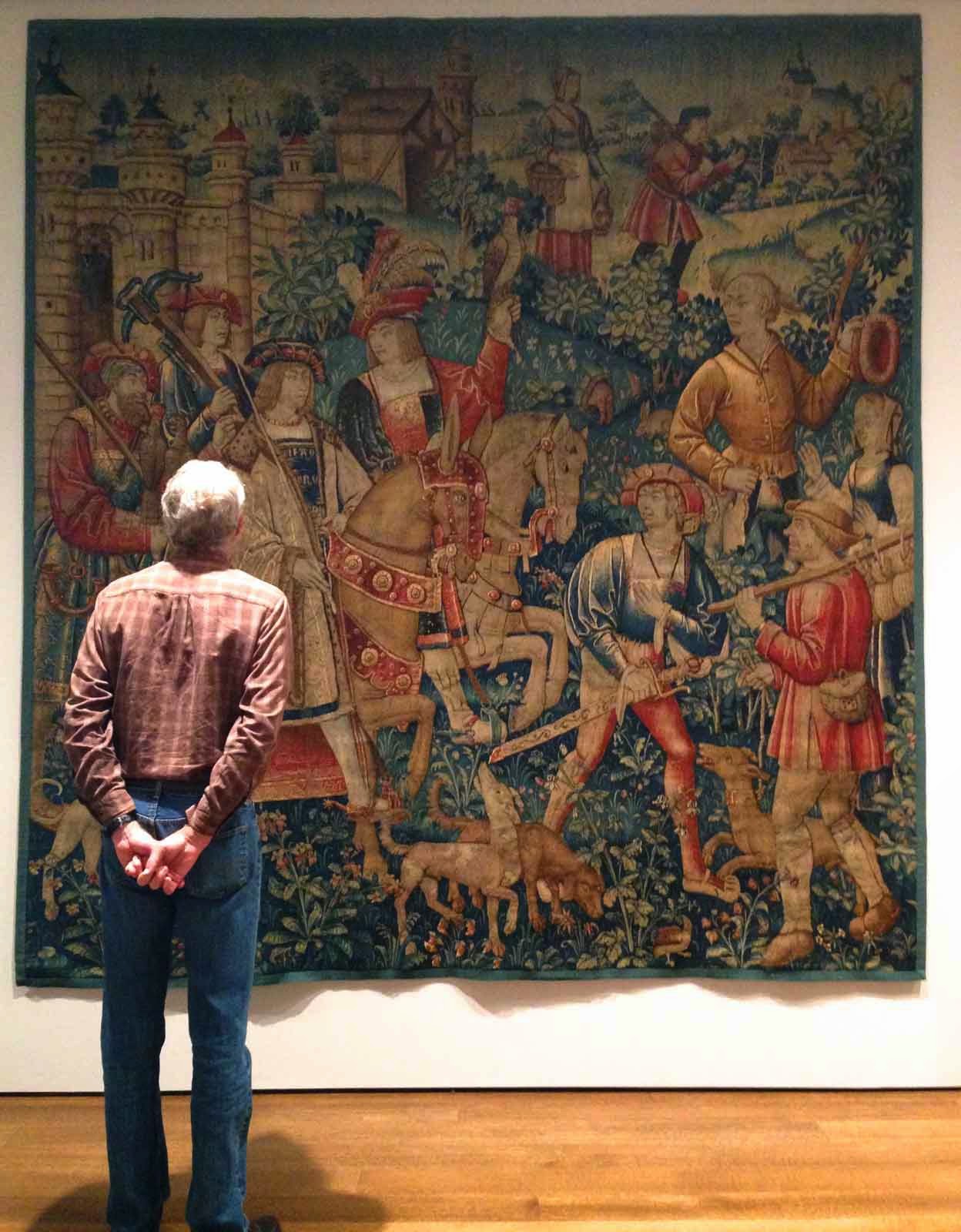 Now that I am back home, I plan to get back to work - especially on my Studio Tuesdays!

Posted by K Spoering at 9:57 AM No comments: