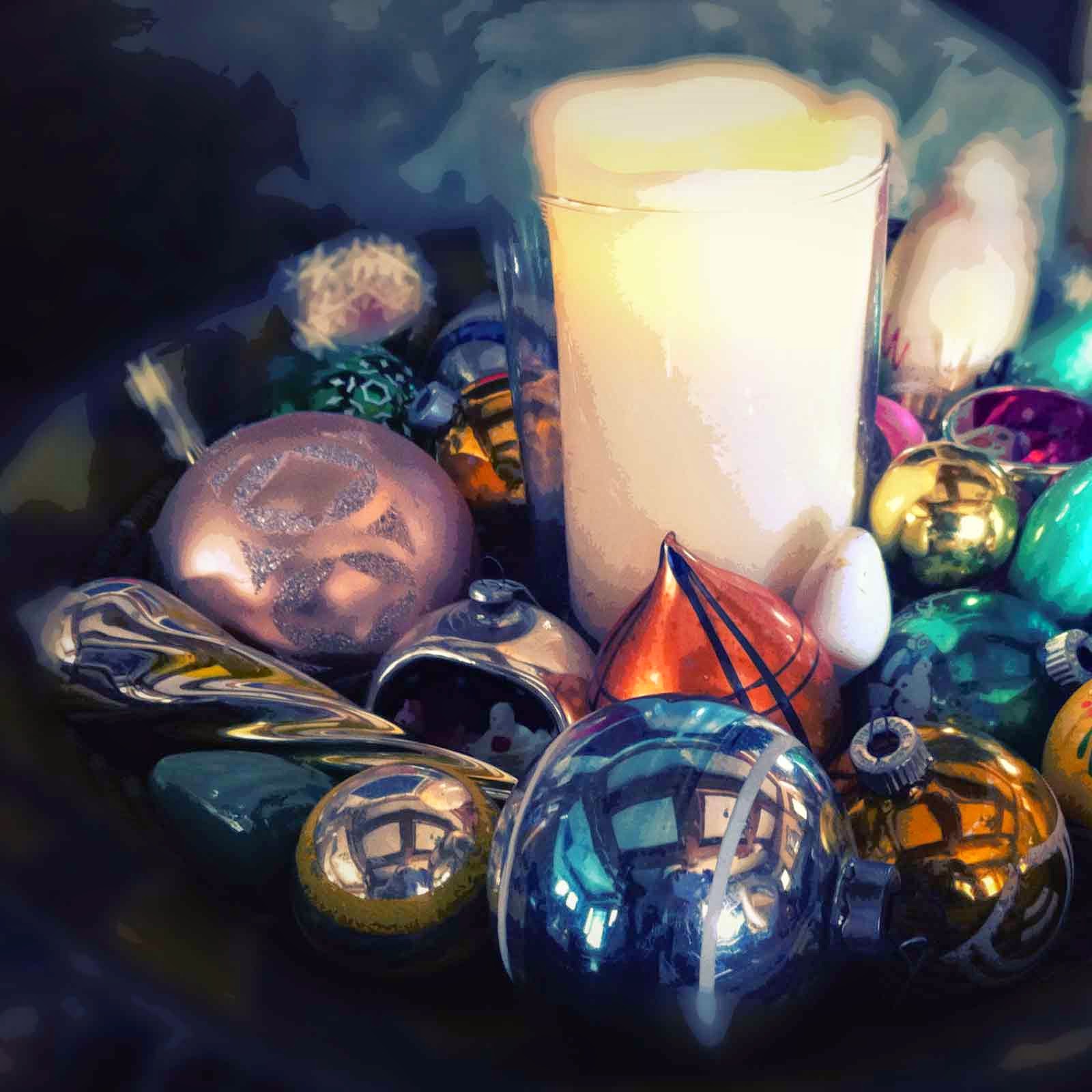 Yesterday was another 'Studio Tuesday' when I didn't even step foot into my studio. But I did get my 2014 taxes done, and that counts for something! 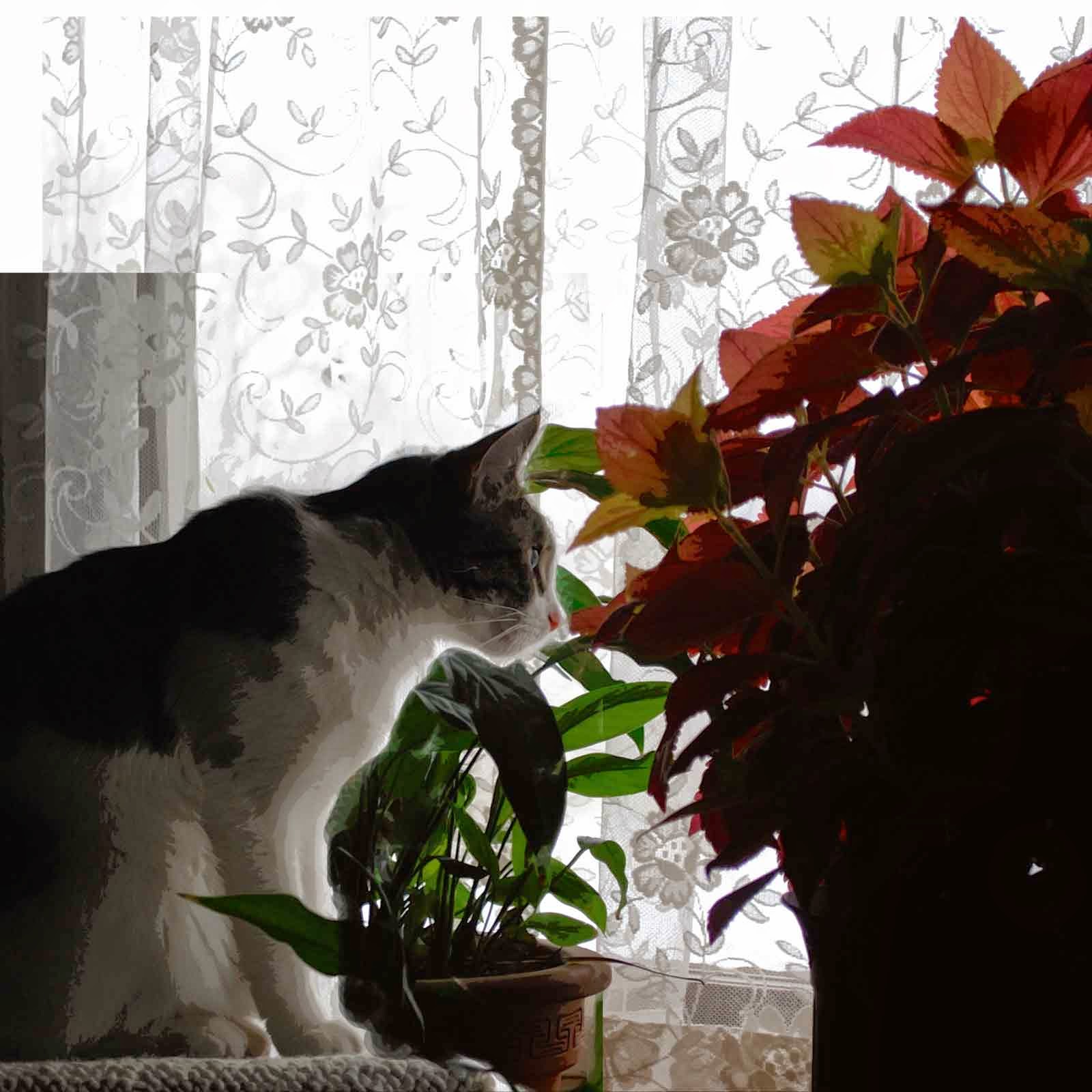 I have also been working out a design for the final Calendar Series tapestry, which will be for the month of December. 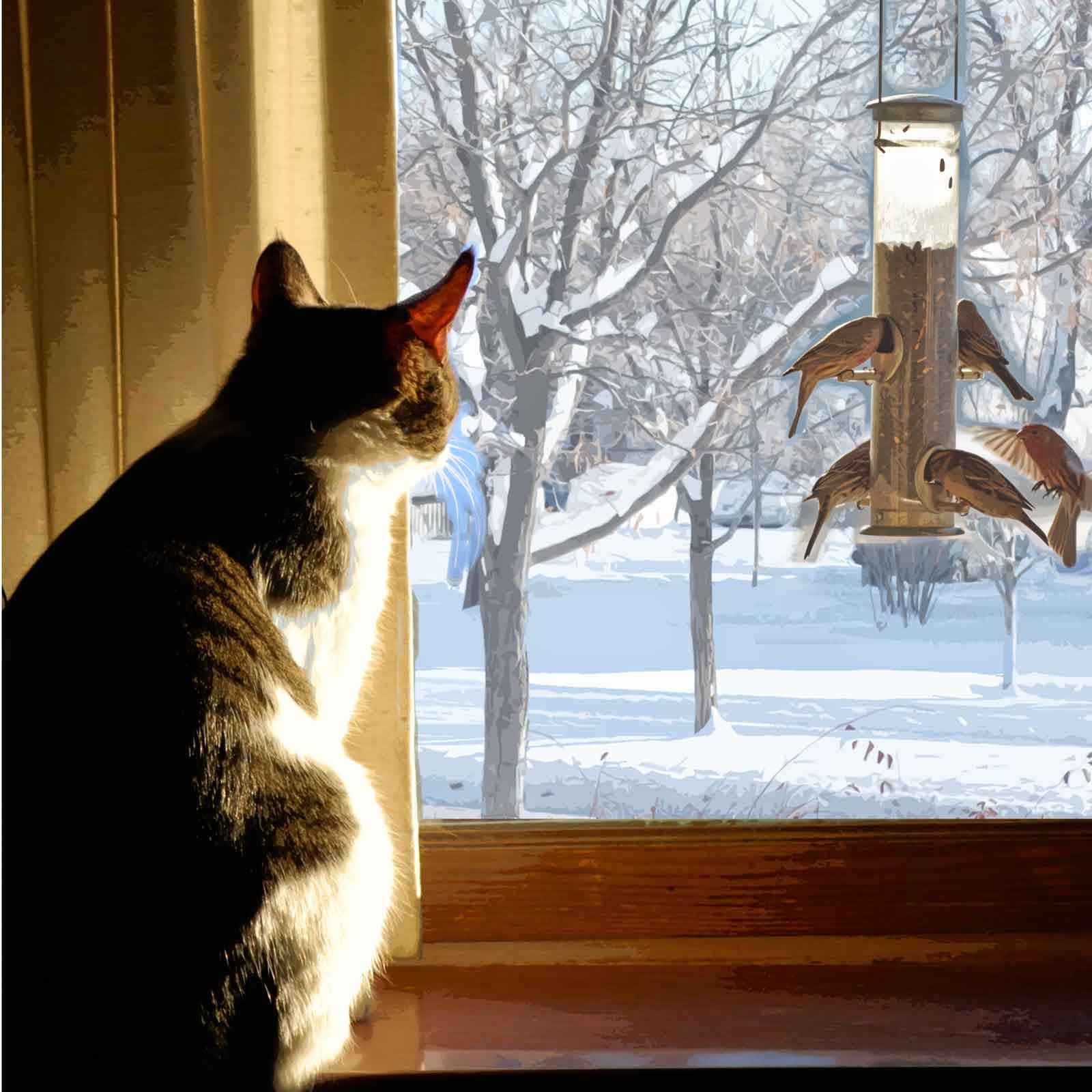 These are some of the images I considered, but none of them made it to the 'final choice' stage. 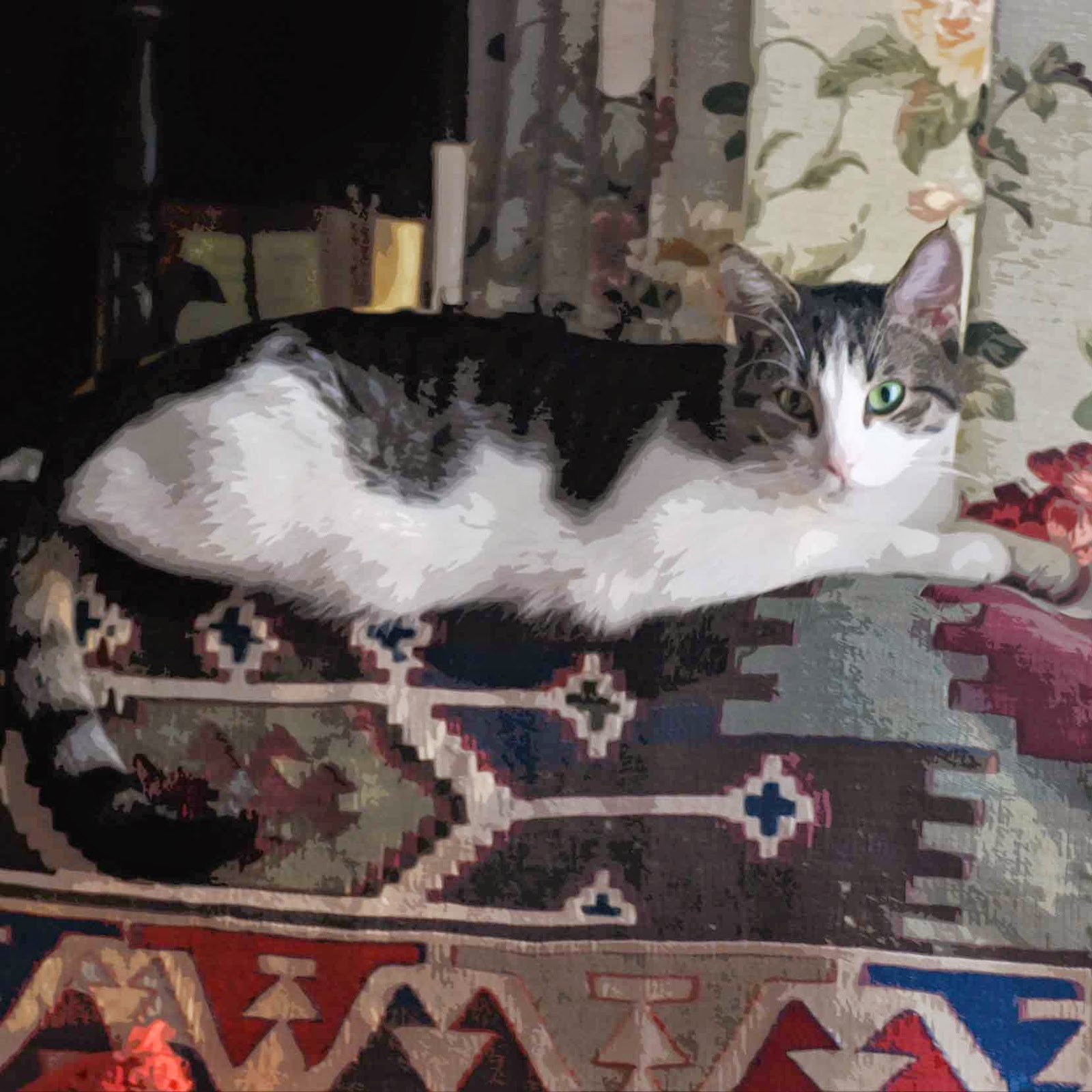 They are all pretty good images for December, but each, for one reason or another, left me dissatisfied. 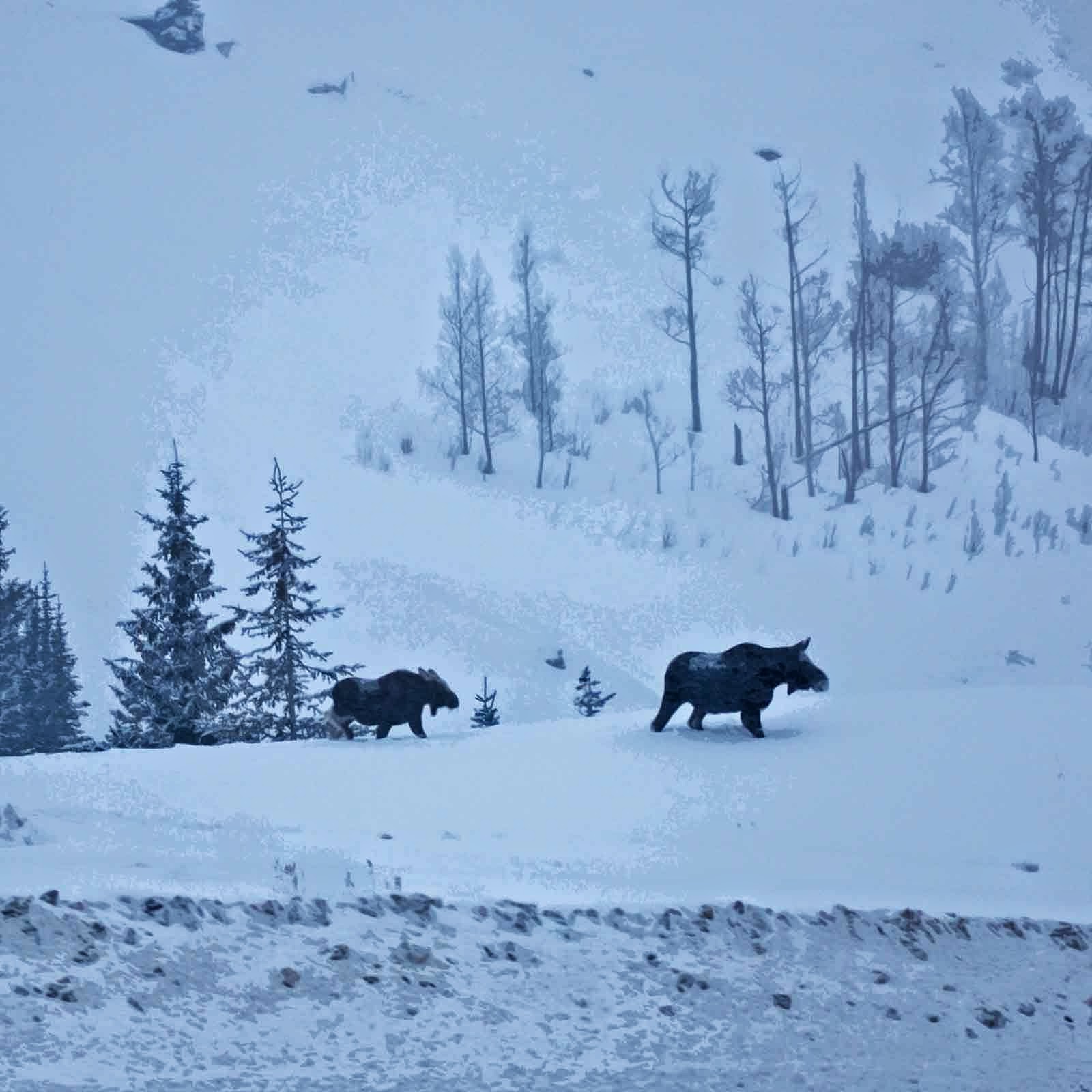 None say "December" to me, though all are images I collected in the month of December. 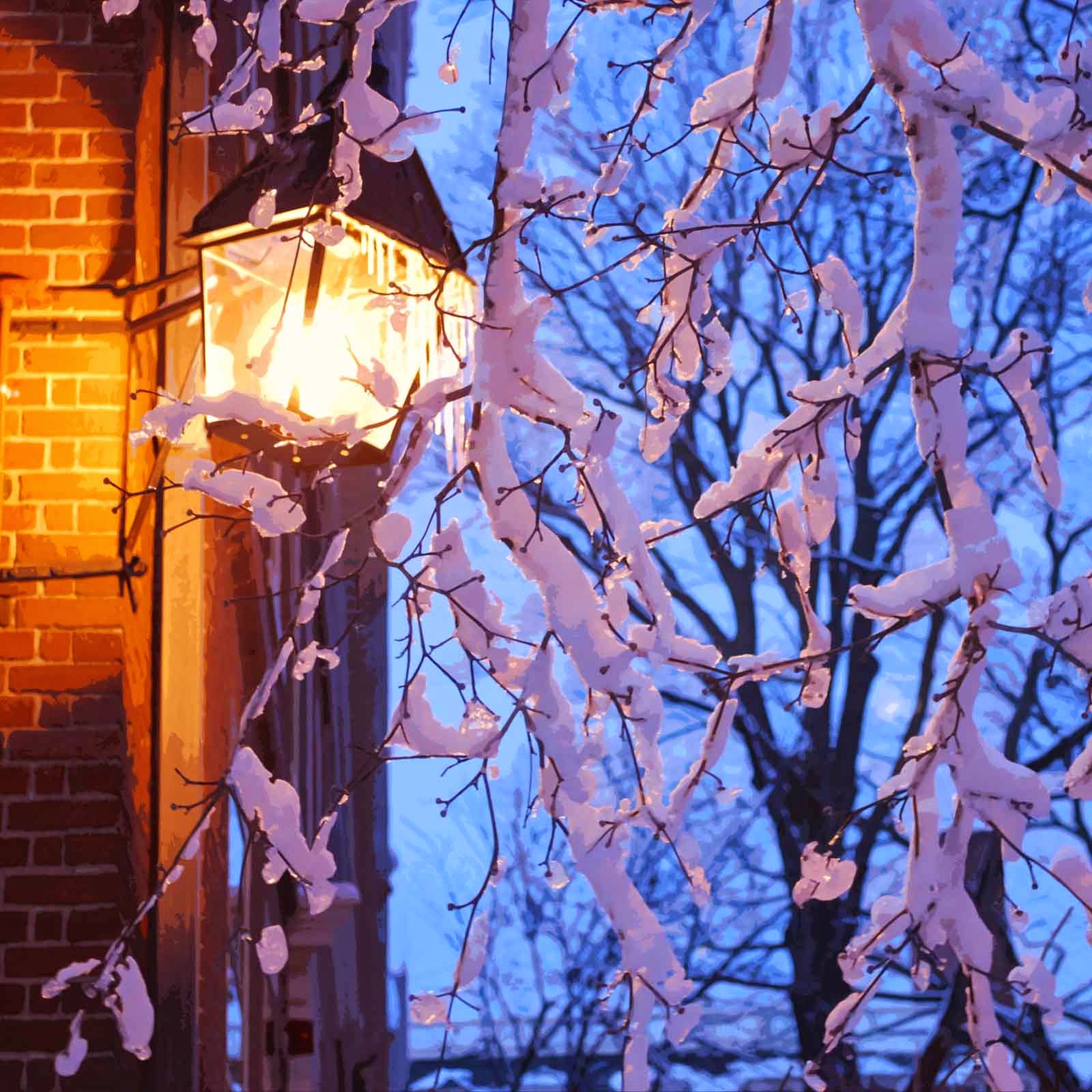 These images are from photos; most from more than one merged image. So they might look a bit choppy here or there. 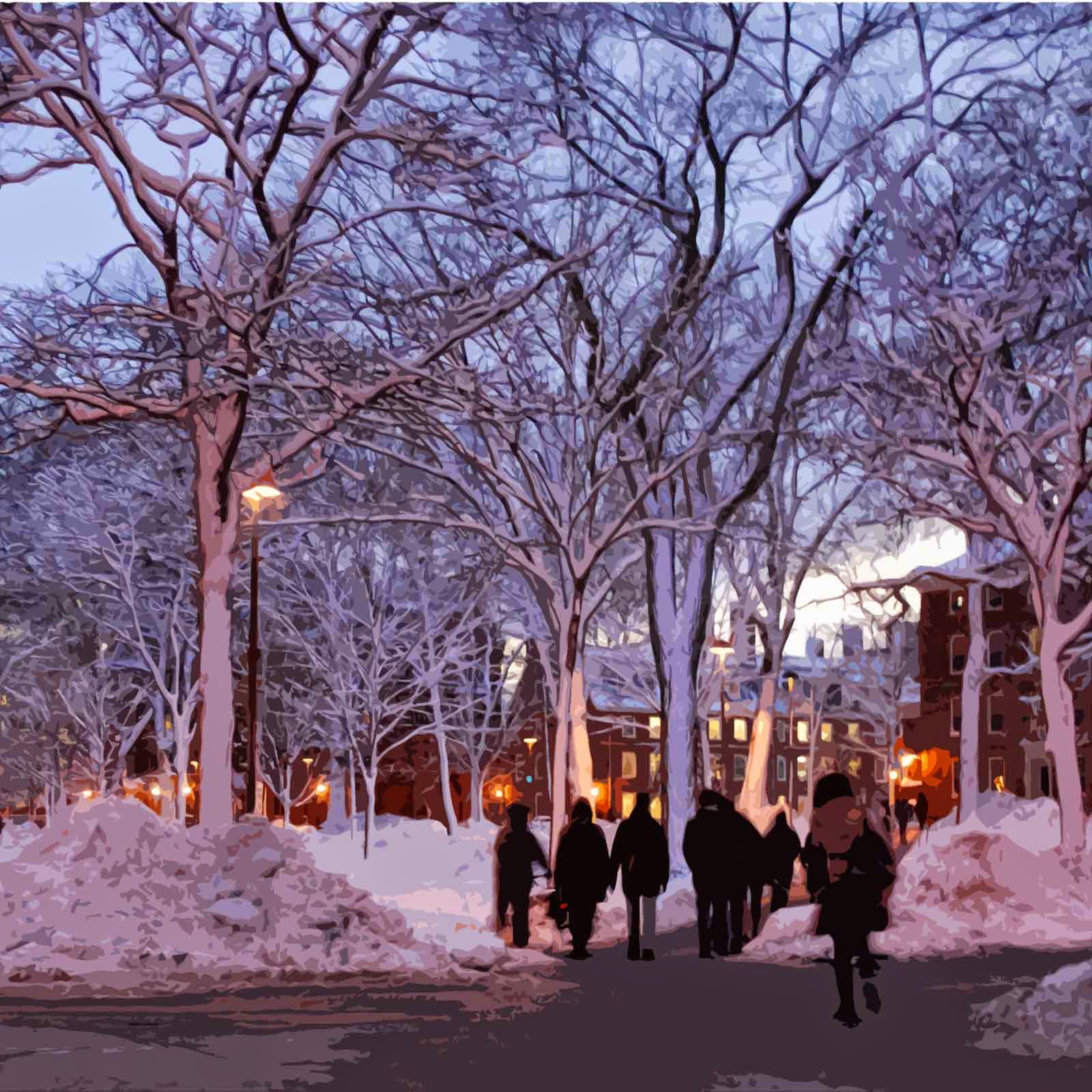 And, though I will not be weaving any of these for this series, there are several here that I love, and may end up painting at some point.

I hope, when I do 'reveal' the final design choice, it will not be a total disappointment to too many. I just have to go with what excites me, as I'll be spending the loom time creating it. Also, I wanted an image that would fill out and complete the series as a whole and would not feel repetitive.
Posted by K Spoering at 2:05 PM 1 comment: 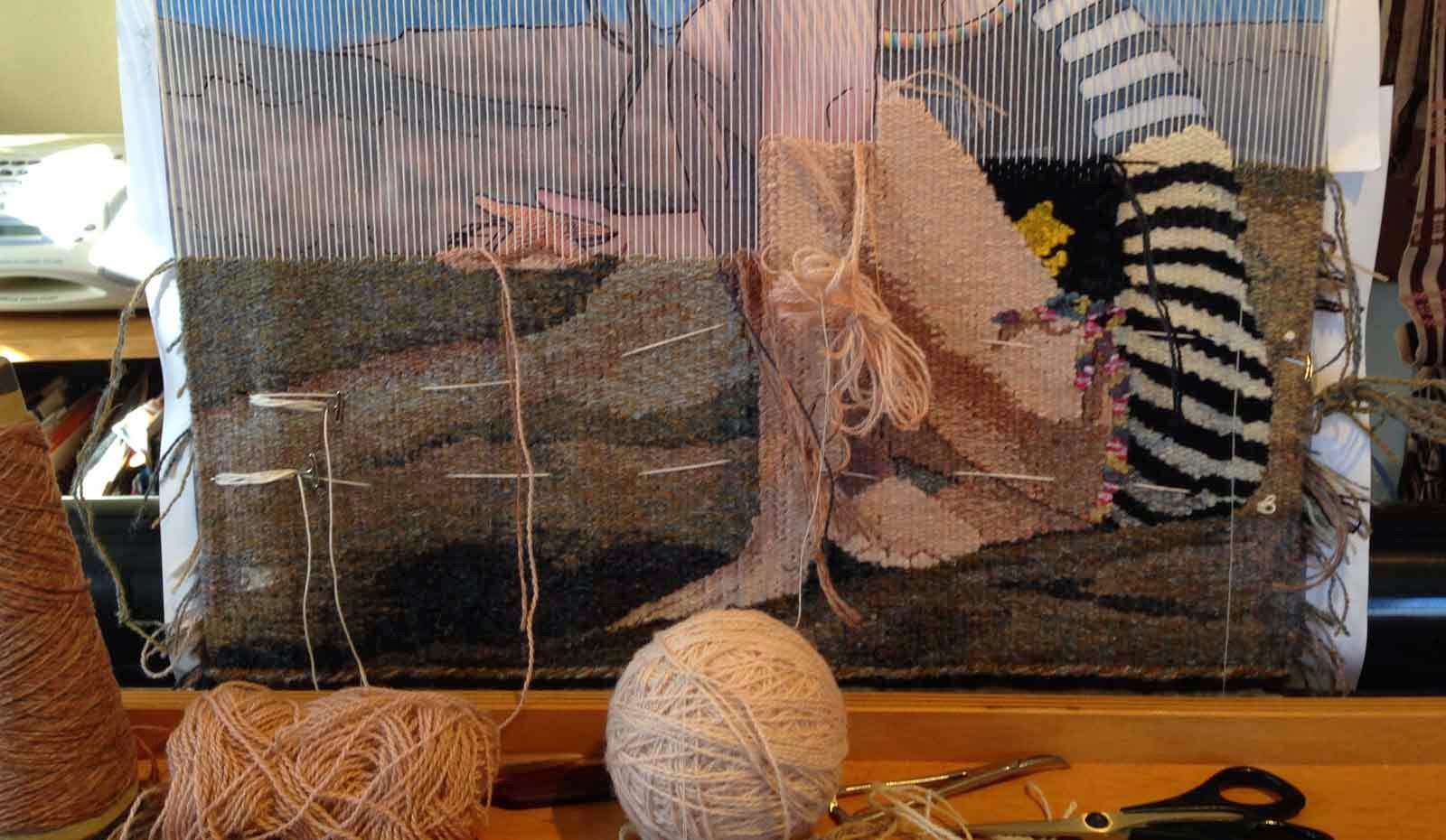 I made a bit of progress on the "July" tapestry today. I haven't been at the loom for about a week, so it took some time for me to remember where I was going! 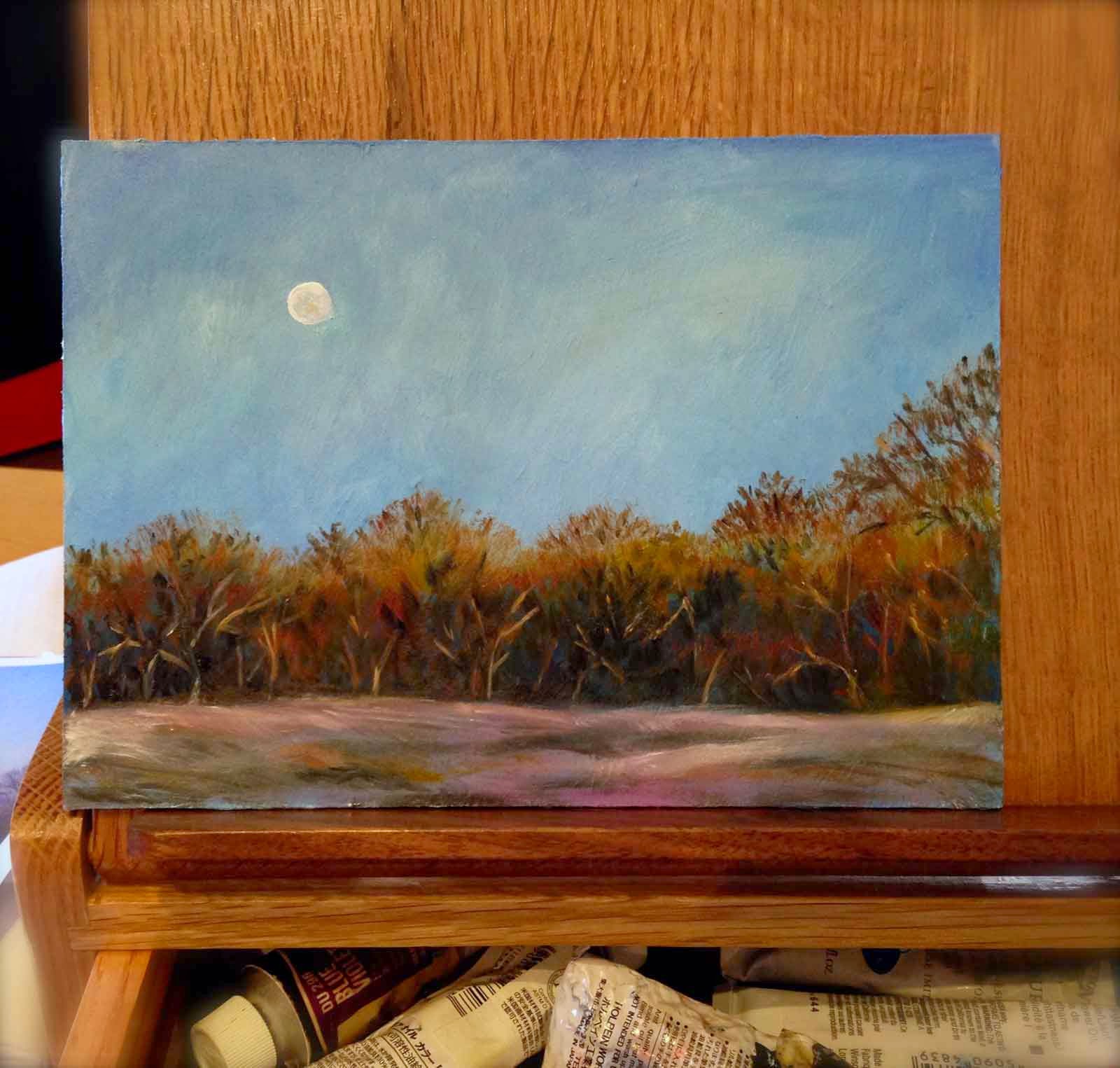 Yesterday I worked for awhile on this little Kansas painting. It is small, just 5x7". It is from a photo I took of a copse of trees the morning we left Kansas. There was a setting full moon; I believe it was one of the Super Moons to be in 2015. I just liked the colors of the mostly bare trees and the bits of snow on the ground. Trees in Kansas are always a rare and beautiful thing! I don't know if I'm done with this painting or not. It can sit and dry while I 'contemplate it's level of completion.' Right now, I kind of like it's sparseness. It says Kansas to me. A place where the moon can be the center of attention in a landscape. 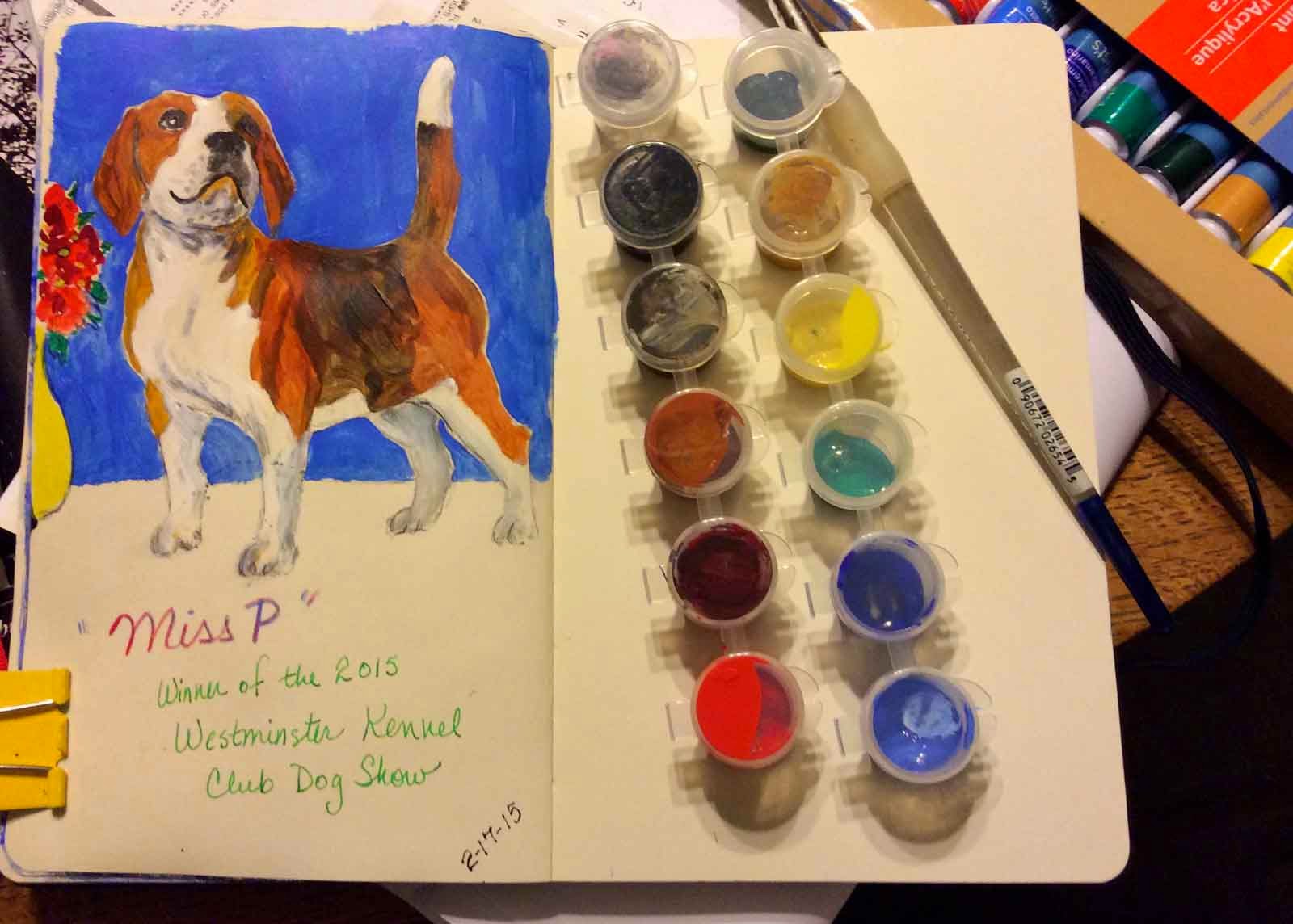 I have been struggling with my 2015 sketchbook. I like to keep a sketchbook, almost like a journal, as a collection of images from my daily life over the course of a year. But Moleskine (which has been my sketchbook of choice for the past 4 years) has changed their paper. I searched the Internet and discovered that I am not the only former Moleskine fan who is unhappy with the change! I emailed Moleskine a few weeks ago, and have not received any response. I hate to lose the first two months of my year's sketches by starting a new sketchbook. So I decided to try using other media than the watercolor and ink I have used in the past. There are several illustrators whose work I truly admire who use cheap acrylic on cheap paper, with great results. So I got some cheap acrylics and put them in these little sealable pots (they remind me of the paints that come with Paint by Number sets.) I did a few pages, and am discovering that it works pretty well. It doesn't work if I try use the paint watered down, transparently. It is then just like watercolor, and the paper absorbs most of it. But if I use it thickly, it it very bright, like a child's painting, and I think I like it! So I'll keep going, and I may end up with a totally new sketch style! New style = new way of looking and seeing, usually, so maybe this will be a Good Thing. I hope so, at any rate.
Posted by K Spoering at 7:55 PM 1 comment:

Meanwhile, Back in the Studio.... 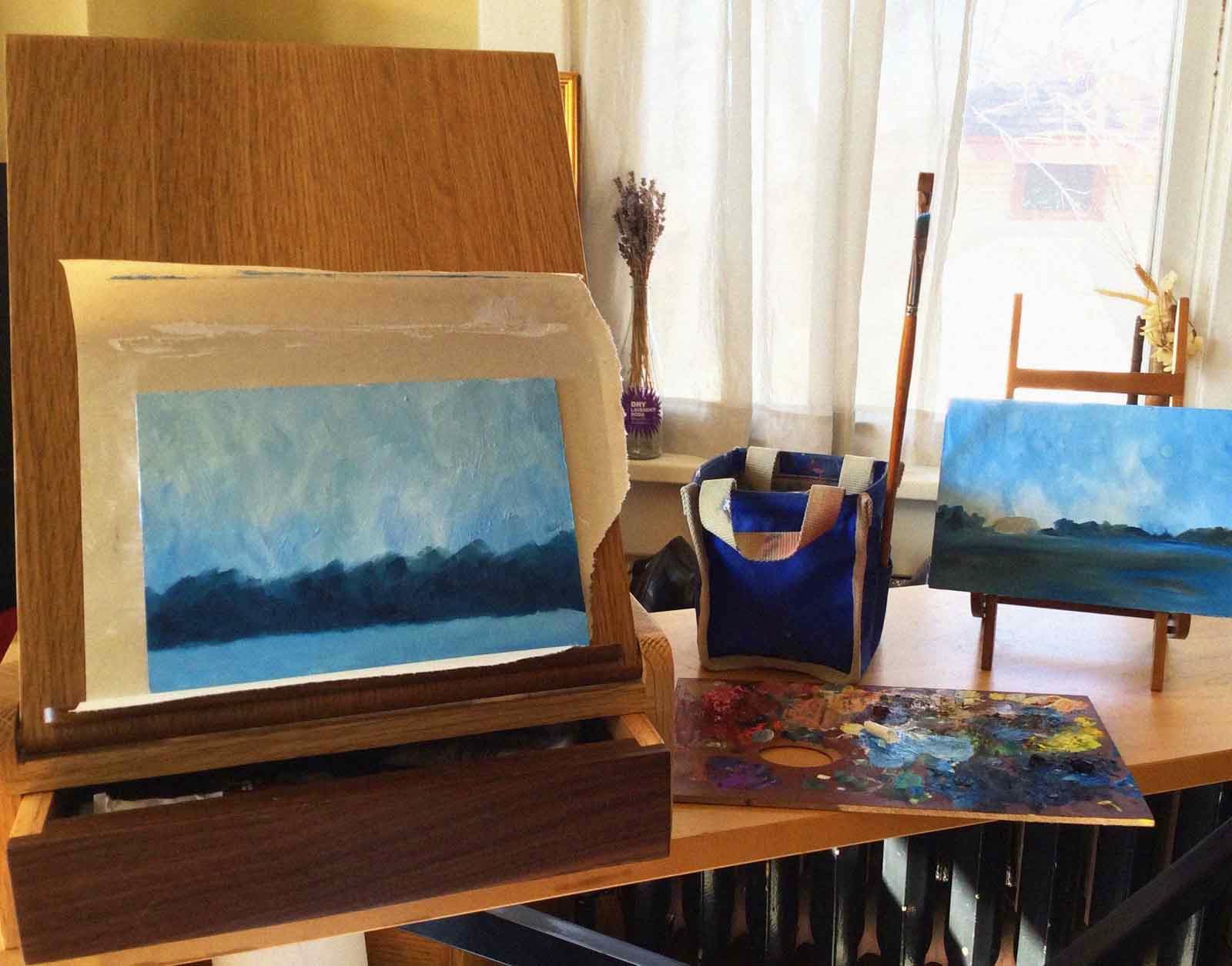 Having returned home from the land of Oz, (aka Kansas, where I did indeed see 'flying monkeys,' though no helpful wizards) I got back into the studio for awhile today. I took a lot of photos along the way - mostly from the passenger seat of a moving vehicle. I am getting pretty good at doing that, but I did miss several excellent shots because I was not in control of the car's breaks.

Taking photos of the heartland landscape made me remember that, tho' I spent most of the first 21 years of my life there, I have never painted the beautiful prairie. I have done a number of 'Places I Remember' paintings; little 5x7" oil land- and city-scapes that I keep and treasure on my own walls. So I decided I want to do at least one Kansas landscape for that collection. This morning I used, for the first time, the beautiful box easel my husband made me, and put an under-painting on two masonite boards. I am hoping I will like at least one of them! 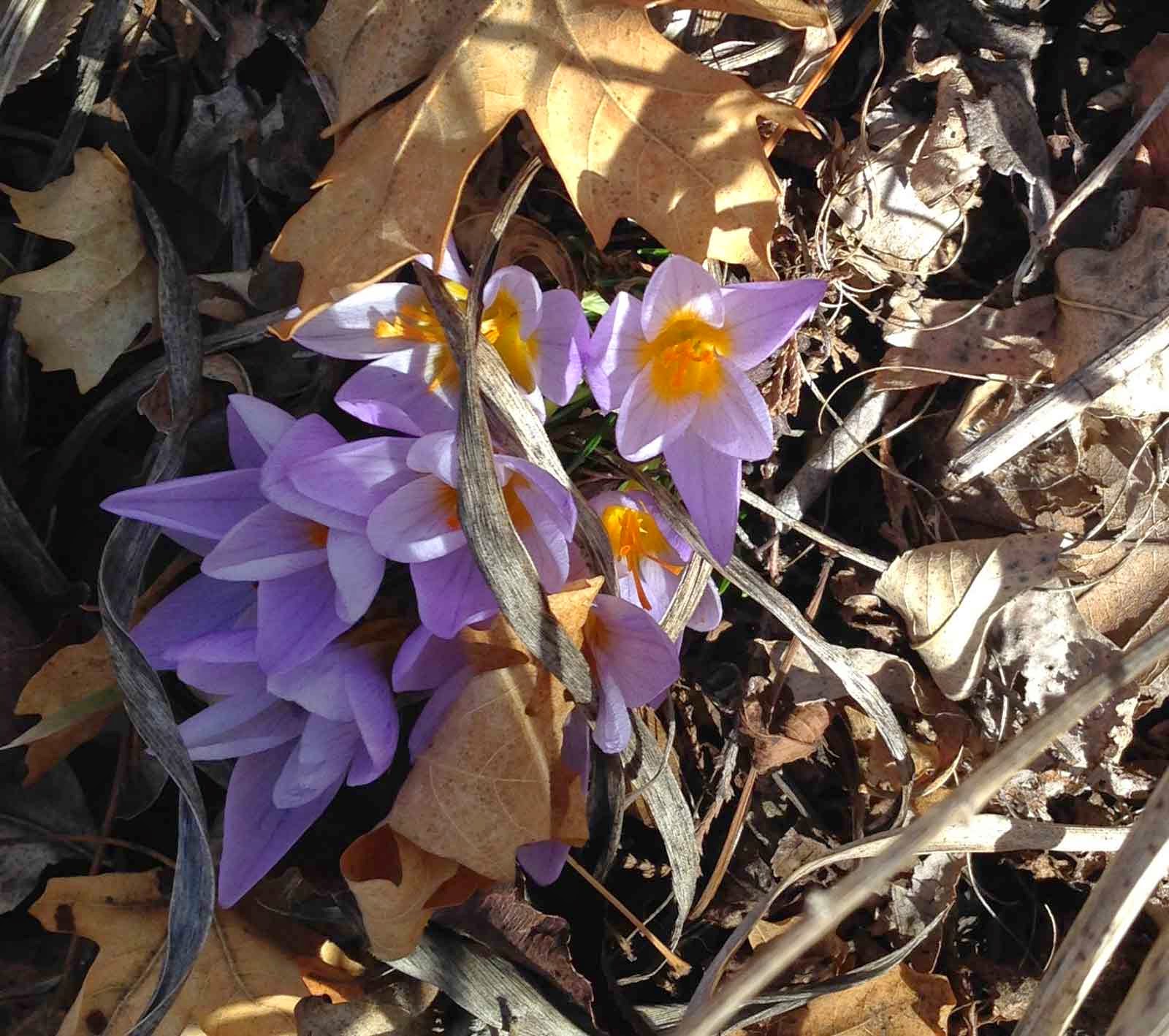 After a walk with Booker, where we spotted crocus already in bloom (!) I moved from the easel to the loom and tried to remember where I had left off the last time I worked. I progressed enough to wind the warp forward, and discovered that I do still really love weaving tapestries! All I need is more time.... but isn't that all tapestry weavers everywhere long for? 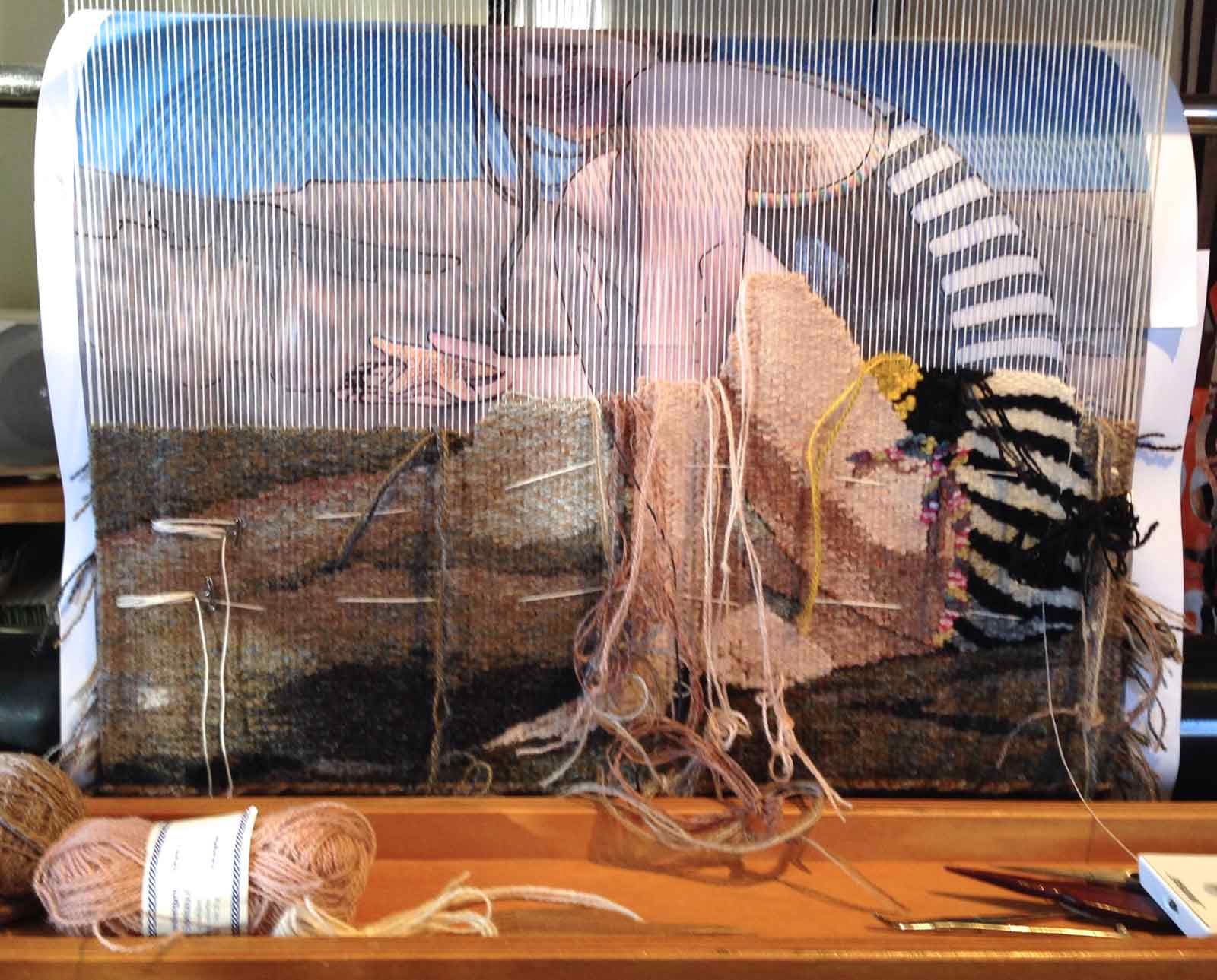 Posted by K Spoering at 4:33 PM No comments: