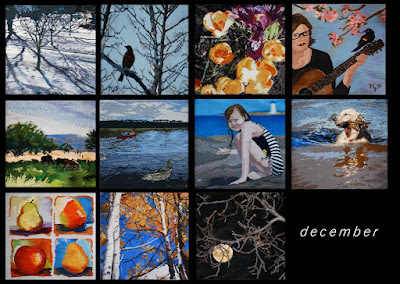 These are the Calendar Series tapestries I have done, in the order of the months (Jan, Feb, etc.) Today, I will tie on the warp for the final tapestry of the series; December, appropriately enough. Each of these are 18x18 inches, mounted on a fabric covered stretcher frame (which my handy husband constructed for me.) I still hope to hang and exhibit these 12 tapestries all together when the series is complete, along with the four Seasons tapestries.
Posted by K Spoering at 9:37 AM No comments: 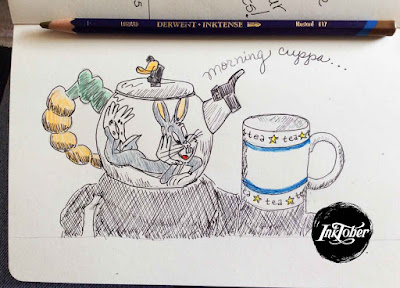 I actually have been doing little sketches almost everyday this week. They are not complex. I have not spent a great deal of time or, I confess, effort on them, as I've been busy with many other things, as always. Mostly sorting messes that have accumulated with a great deal of time and neglect. But I have met my goal so far this month, of doing at least five sketches each week. And it is becoming more joyful, and less of just another chore, so that is a good thing, too! 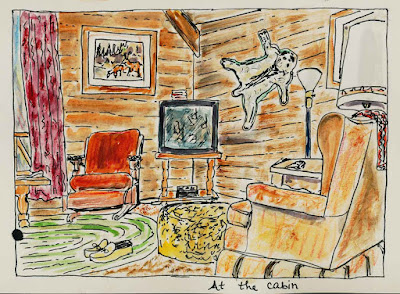 I have enjoyed the little 5-20 minute sketches that I've done. They are all done in ink, then I've added color to some with InkTense pencils, or, in the case of the one above, watercolor. That one, and the one below were done at our cabin. Every year I sketch the colorful oak leaves in my sketchbook. They seem to capture the look of the whole of the mountains to me. The little sketch of the corner of our cabin above is, quite appropriately, a very 'rustic' sketch; just like the cabin itself. 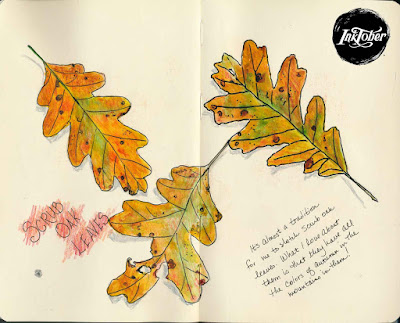 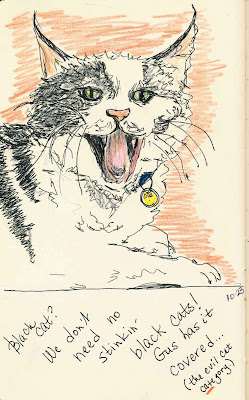 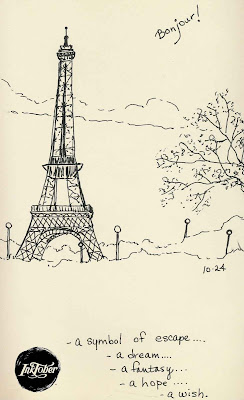 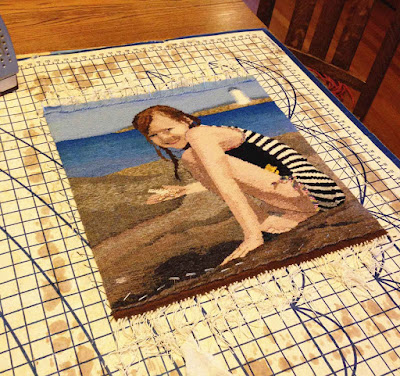 The "July" tapestry has all slits sewn, and is laid out on the dining table, being blocked. These small tapestries (18x18 inches) end up pretty square and straight, so little blocking is actually needed, but it makes the surface nice, so I do it anyway. (You can see that the cutting board is damp from the press cloth.) 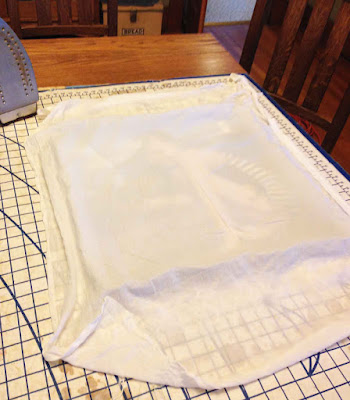 My blocking method can be seen here.

Sketching and weaving... an update! 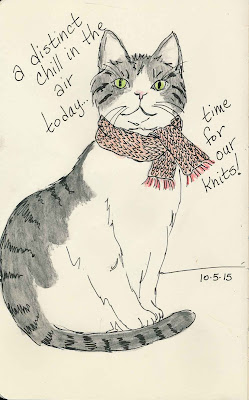 As 'INKtober' came 'round just as I was determining to sketch more again, I decided to participate by sketching, using my fountain pens (which I generally use anyway) and Inktense colored pencils, at least five times each week throughout the month. So far, I've kept up with my determination! Here are a few of the sketches I did last week. 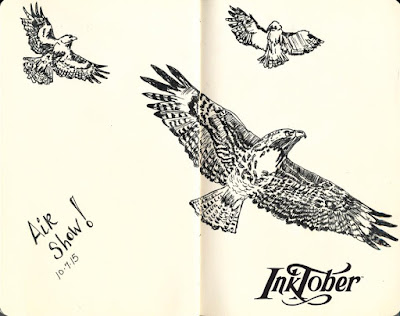 This, from watching an adult and two young hawks fly overhead. 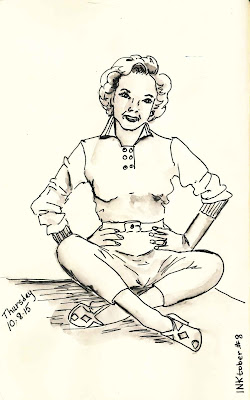 And this from a stock photo online. I just decided I wanted to do a person, but not anyone I personally knew. It was fun, with no pressure to please anyone but myself. I used ink only, making a few shadows while the ink was still wet, with water. 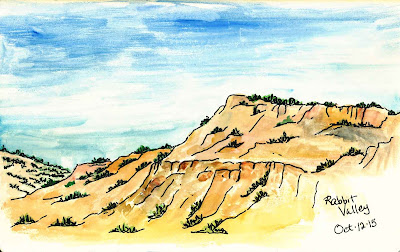 This one I did this morning. I decided to do it as I usually sketch, with color first, then adding the ink.  I'm not thrilled with it, but then, I rarely am thrilled with the landscapes I do. It did capture the bleak emptiness of the area, I guess. My husband, who was there to hike with the dog, wondered if I would find anything at all to sketch there! 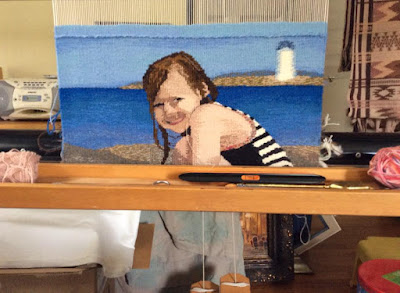 And finally, this tapestry was cut from the loom on Friday! It is still 'resting' on the dining room table. This week I will sew slits and block it, then will take photos and re-tie the warp onto the loom for the final Calendar Series tapestry, "December!" 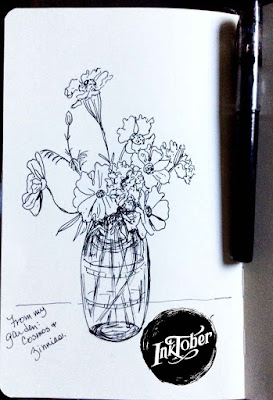 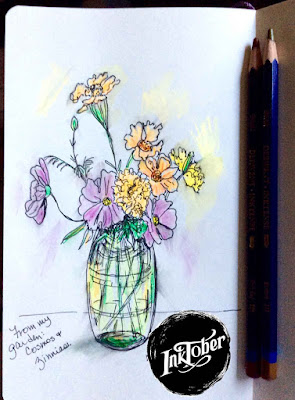 Posted by K Spoering at 8:22 AM No comments: 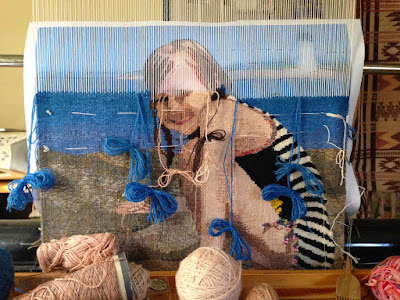 I have finally begun to feel 'at home' at the loom again, and the 'July' tapestry is actually progressing, in spite of all the unweaving I felt compelled to do as I began work again. If I keep at it, I'll be done with this one soon, and ready to work on the next, and final Calendar Series piece. That makes me happy. 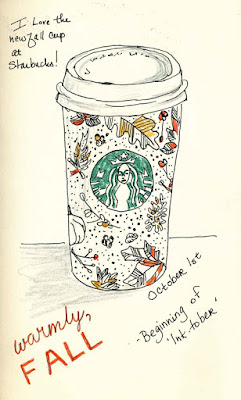 I have also determined to sketch more, as my annual sketchbook just didn't have much in it, and certainly nothing that looks like I sketched it 'for fun.' So, with the beginning of the month, I decided to participate in #INKtober.  I'm not sure that I'll be able to do a daily sketch, but I'll do as many as I can. So far, two days into the month, I have sketched twice! That makes me happy. 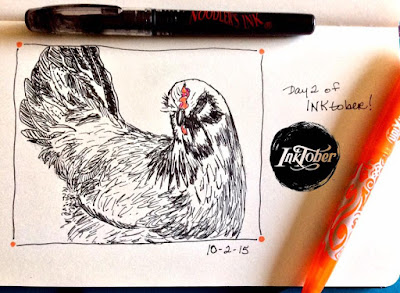 Posted by K Spoering at 4:27 PM No comments: 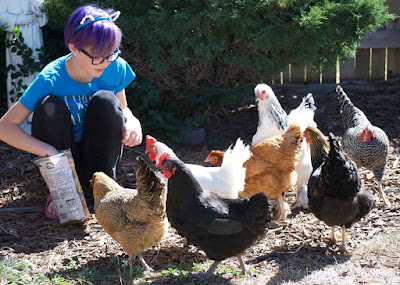 I have been away from home for a bit. I have been missing my children and my grandchildren, and felt the need for a change of scenery, so I went to see my son's family in Massachusetts for a week. On the way, I got to stay with my other son's family in Denver and see my grandchildren and grand-chickens there. I love this photo of my oldest granddaughter with the hens! 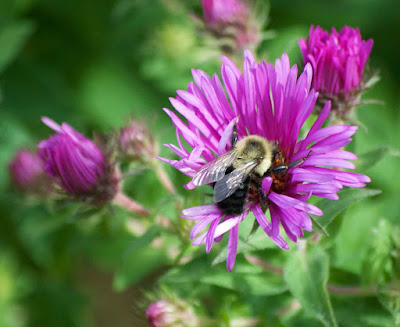 I knew I was going too soon to see fall color in New England, but, though the leaves hadn't changed, the air was crisp and there was plenty of beautiful color to be seen. We walked the grand-dog on beautiful estates, which are dog and people and bee friendly. One also had this tree (below) which I have never seen before. It looked like a Dr. Seuss tree to me! Nothing seemed to be eating the berries, so I assume they are not edible. 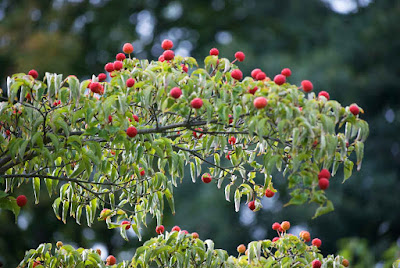 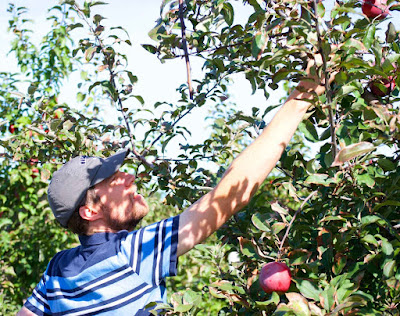 On the weekend we got to meet some church friends at a huge pick-your-own apple orchard. We loaded our bag, and our tummies, with all kinds of apples, and fresh apple cider donuts. 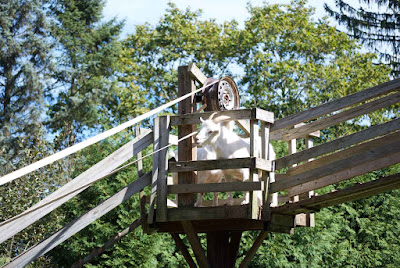 In addition to the orchards, there were animal pens and mazes and a hayride. (I hadn't been on a hayride since I was a teenager, when hayrides were very 'romantic,' as you might get to hold someone's hand. Since I had traveled alone, and my hand-holder was back home, it wasn't quite as romantic this time.)  The goats had ramps leading up to platforms, with pulleys that had empty cans attached to them. People could buy goat food and put it in the cans, so the goats watched the cans as they came up the belts, to see if there was food in them. 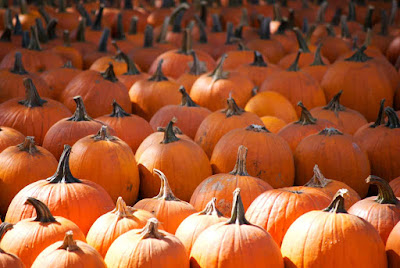 At the pumpkin patch (more fall color!) I took another favorite shot of my youngest granddaughter and one of their friend's babies. So sweet... don't you agree? 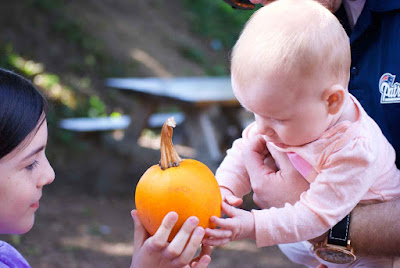 A good bit of the week was spent watching soccer. My grandson is obsessed with it, loving both playing and watching the sport. So I got to watch practices, and a couple of his games, and go along on the highlight of his week: when his team got to go to a professional game (the Revolution, who play in Gillette Stadium) and then  got to walk onto the field at halftime to "We Are the Champions" because they won their division championship tournament. That was some big excitement for a 9-year old soccer player! (And for his grandma.) 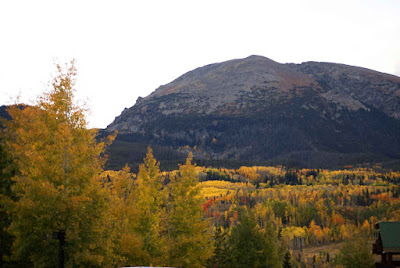 The week went by too quickly, and I flew back to Denver, then drove home over the mountains, to discover that fall color had come to Colorado in my absence. The aspen, which just had small patches of yellow when I had driven through a week before, had turned brilliant gold while I was away. The color seemed to be at it's peak on the passes.

Home now, I am ready to get busy. There are deadlines approaching, and my loom has a tapestry on it that has been on it for almost a year. Much too long. Today I went in and worked on it; weaving, then unweaving, as I've lost track of where I was going. But, by the end of the day, I began feeling at home at the loom again. Tomorrow, and tomorrow, and a series of tomorrows, and it will be done.