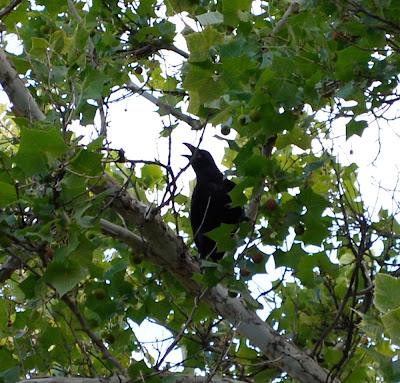 I was in the studio this afternoon and I heard the loudest racket outside the studio window, which is on the second floor. I looked out and saw this huge raven, of Edgar Allen Poe size and loudness, quoth-ing for all his worth. But as big and bad as he was, I was pretty sure even he couldn't be making all that racket. I grabbed the camera and went outside. 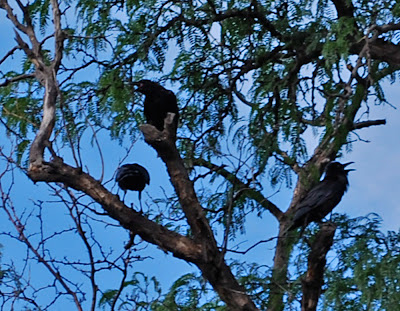 In the tree next to his were three more ravens, all of them somewhere between the sizes of Booker and Gus, cussing up a blue streak at each other. My neighbors began coming out their doors to see what the racket was about. I yelled an embarrassingly ineffective "SHOO!" at them, and the three swooped at me! I had to duck down to keep from getting that Tippi Hedren hair look: 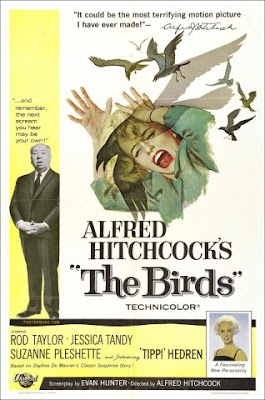 Then all four of the birds (two pairs, I am assuming) went to the chimney of my house to battle it out there. They seemed to be fighting for the privilege of nesting on the chimney! One of the birds kept dipping down into the chimney a ways, and then it disappeared. I have to tell you, that when I went back inside, after discussing the problem with our neighbors for a bit, I walked up my stairway every bit as cautiously as Tippi did! 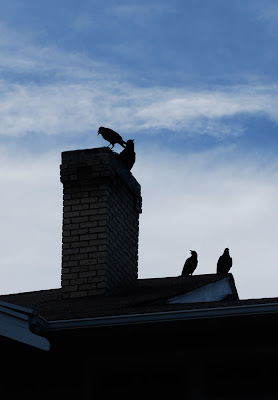 Fortunately, there were no sign of birds in my upstairs fireplace, and no sounds coming from the attic. The war quieted down, and we went on with our evening. Maybe Gus, who was watching the whole proceeding from the bedroom window, scared them away. Or maybe they heard my neighbor offer to get rid of them for us .... which we turned down. At any rate, it was quite an event for our quiet little neighborhood. And now, I want one of these dolls! 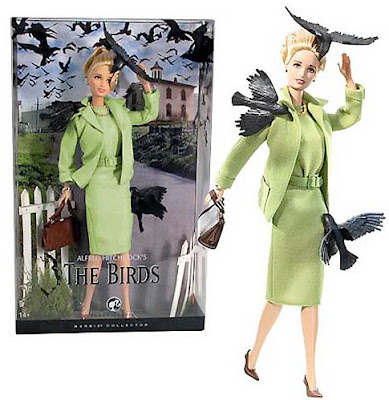 Oh, I want one of those dolls too! We have a rookery right on the other side of the road on BLM land. They make quite the racket at 6 in the morning. I think that they are fledging their young about now hence all the noise, protection and encouragement. They are HUGE.
I rather like them myself, they seem so darn smart.

I like them, too, but not living in my chimney or brawling in my trees! Is four ravens considered to be a 'murder of ravens' or does it take more?

This is a sign. Not to be taken lightly! No joke. Raven is a trickster and also linked to creation.

I would think 4 would suffice!

I don't know much about signs, Tommye, but I'm hoping 4 ravens on my roof is a good sign?

By the way, our art department head has the Tippi Hedren Birds Barbie... her husband gave it to her one Christmas! Gives you a clue about what an interesting couple they are.

I remember that movie! It freaked me out! Hahahhhaha! If I saw it now... It probubly would make me laugh because the graphics are soo outdated. Thanks for the memory! :D