A lot has happened since I last posted here. The opening for my exhibit at The Zesty Moose here in Grand Junction was very nice, but count on me to have an exhibit while everything is shutting down! At least 2 of the small tapestries did sell during the opening weekend, and what doesn't sell there will be listed on my Etsy site at the end of the month. I'll keep you posted on that. 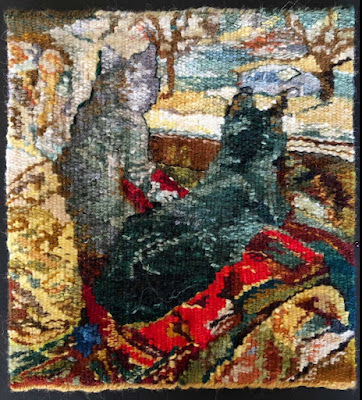 In the meantime, I finally finished this small 8x10" tapestry, "Neighborhood Watch," for the American Tapestry Alliance small tapestries exhibit, Renditions, to be held (fingers crossed) at Convergence in Tennessee this coming summer. This was a very 'fiddley' bit of weaving, but I have found that, especially in times of stress, the fiddlier the better! This is of our two kittens, Ringo and Poe, keeping watch over our world. 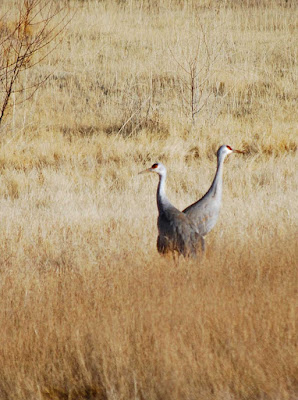 Earlier this week, with our self-quarantine in mind, we made our annual drive to see if we could see some of the Sandhill Cranes that migrate through western Colorado. There is a reservoir about an hour from here where the cranes arrive in groups in the evening, spend the night, then wait for the warm winds the next morning to help lift them up over the Grand Mesa. Four years ago, we saw a huge group of them lift off. The next year, we somehow missed it altogether, siting just a few crane couples in the fields. Last March, we saw a fairly large group (several hundreds) in a field, but it was snowing, so they didn't even try to go anywhere. 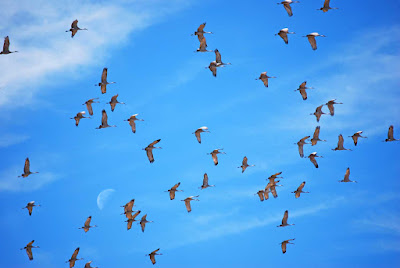 Sunday night, we saw a post online that about 2,000 cranes had arrived at the reservoir by sundown. So Monday morning we got up early and grabbed our binoculars and cameras. We saw several groups here and there, but sited the group of 2,000 in the same cornfield they'd been in 4 years before. We settled in at an overlook between the cornfield and the Mesa. At about 11:00, a group of 5 cranes circled over the field, signaling that it was time to go. The cranes all started rising, and in groups of 50-150, they rose up over us, in a raucous chorus; the most amazing sight and sound!

Within about 20 minutes the cornfield was empty, the sky was full of cranes, circling in ever higher loops, catching the winds that would lift them over the Mesa, on to their next stop.  I turned to a couple who were watching from a ways away and said, "I needed that today."  The man just nodded, and his wife said, "Yes." We all had tears in our eyes. What a blessing to see that, no matter how crazy the world seems to get from our perspective, in reality, there is order, there is routine, there are still things to fill us with wonder. 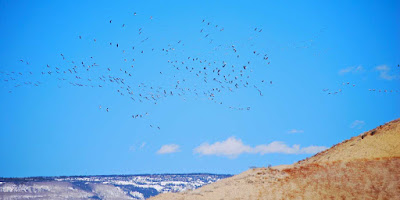